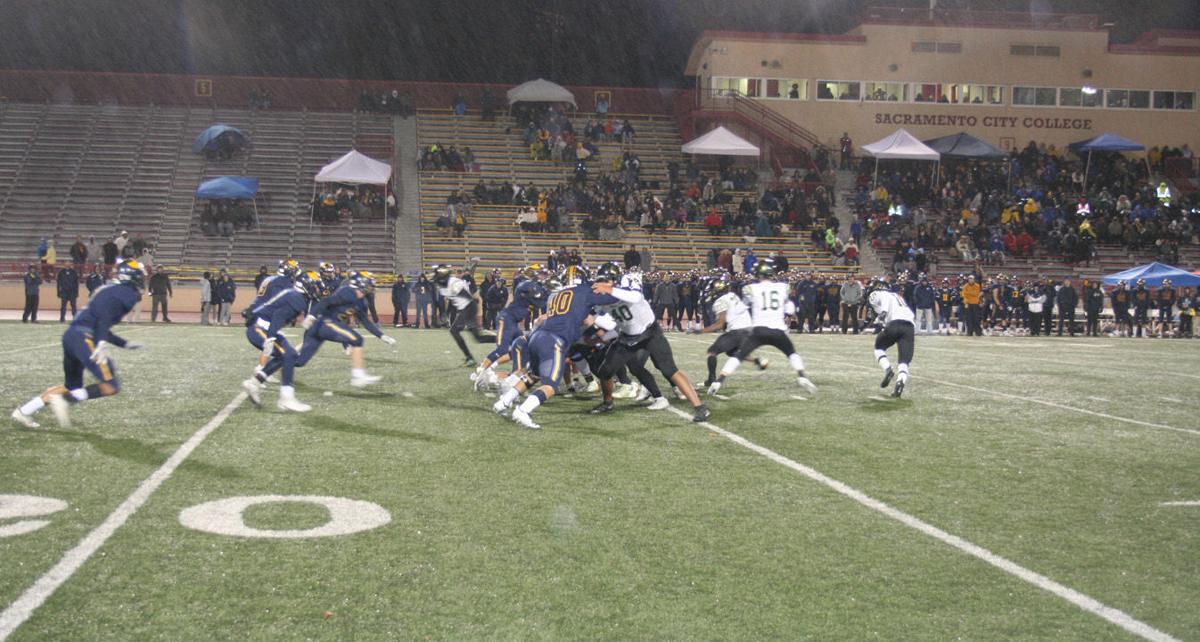 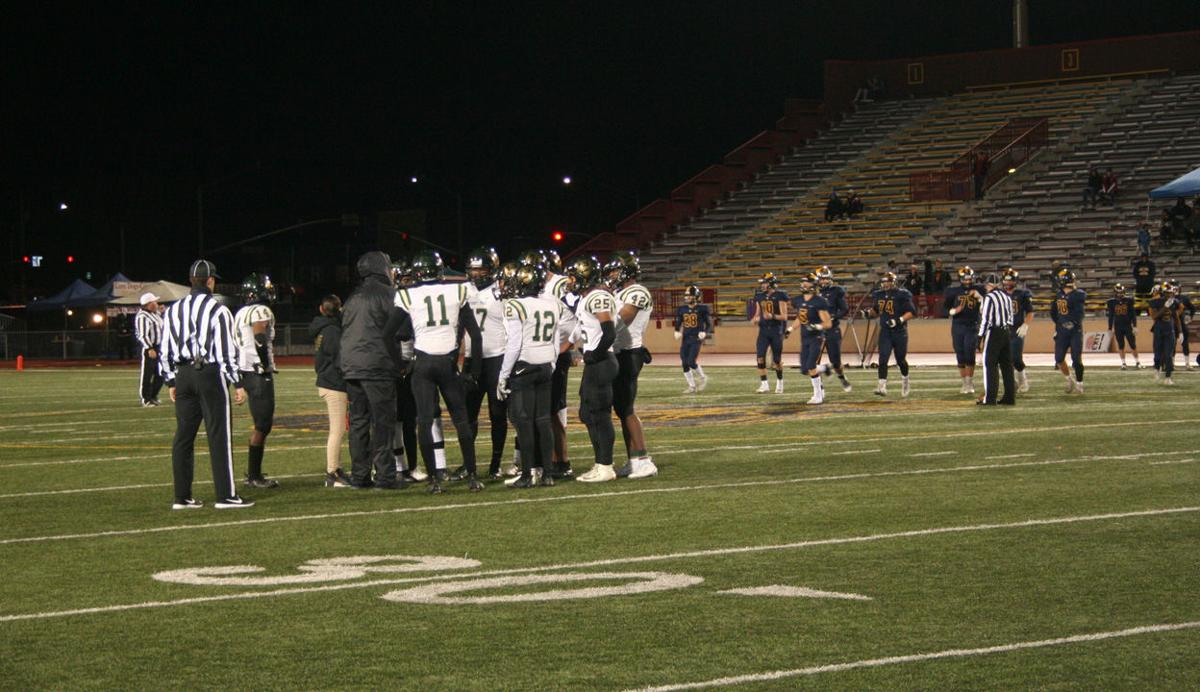 The Mustangs prepare for a play at Hughes Stadium. 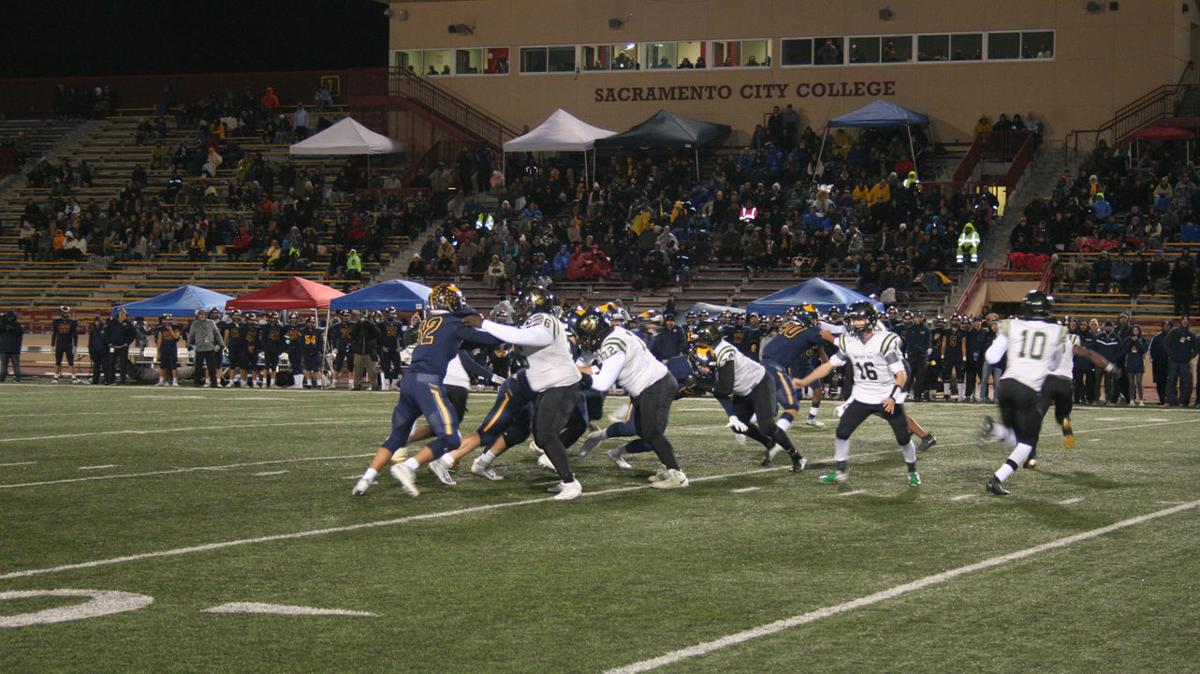 The Mustang offensive line blocks Oak Ridge during the D I Championship game.

The Mustangs prepare for a play at Hughes Stadium.

The Mustang offensive line blocks Oak Ridge during the D I Championship game.

The Monterey Trail Mustangs made their second consecutive trip to the Sac-Joaquin Section Division I finals, but the Mustangs couldn’t close the deal as they fell to the Oak Ridge Trojans 35-27 Saturday night at Hughes Stadium.

Saturday was the Mustangs’ fourth chance since they opened in 2004 to raise that first section championship banner, but the Trojans used the run game effectively against Monterey Trail.

The Mustangs’ (12-2, 5-0) struck the scoreboard first when senior quarterback Viktor Timonin found junior running back Prophet Brown for a 45-yard touchdown pass, but after a missed extra point they had the early 6-0 lead with nine minutes to go in the first quarter.

This was the only time Monterey Trail would lead in the entire game.

Oak Ridge (11-2, 4-2) responded with a 70-yard drive and it ended when junior quarterback Justin Lamson rushed the ball in from the two-yard line.

Lamson gave the Mustangs problems all night long as he rushed for three touchdowns that included 15 and 22-yard scores.

After the two other rushing touchdowns by Lamson in the second quarter, Monterey Trail was down 21-6 until Brown shot up the right side line and found the endzone after a 79-yard touchdown rush to cut the Oak Ridge lead 21-13 with 3:10 to go in the first half.

Lamson quickly led the Trojans down field for a 68-yard drive that ended when he found junior wide receiver Gui Lozada for a 22-yard touchdown pass with 1:23 left in the first half.

The Mustangs responded when Brown and Timonin linked up for the second of their three combinations when Timonin found Brown for a 61-yard passing touchdown to cut the lead back a deficit of eight with 48 seconds left in the half.

Oak Ridge got the ball back with great field position and looked to move the ball quickly and add another score before the half closed, but Monterey Trail junior defensive lineman Jasdev Banwait intercepted the ball toward midfield.

The interception was key because the Trojans received the second half kick and the momentum of the stop gave Monterey Trail a chance to catch their breath and kept the deficit to eight points heading into the half.

During the halftime intermission, the wind and rain started to pick up as both teams walked out for the second half kick.

Mustangs junior kicker Diego Soto kicked a high ball off the tee, but Monterey Trail was able to recover the ball because it went 10 yards and when the Trojans didn’t pick the ball up, it became a live ball.

Monterey Trail had great field position and a chance to inch closer to Oak Ridge.

The drive ended when the Mustangs turned the ball over on downs on the Trojans 24-yard line.

Mustangs senior running back and one of the leaders on the Monterey Trail roster Caleb Ramseur had trouble finding his rhythm in the ground game Saturday.

Ramseur carried the ball 17 times Saturday compared to the 38 carries against Folsom the week prior.

Ramseur said Oak Ridge had a crash type of mentality on containing him during the game.

“The outside backers came down on the run hard, which made it hard to squeeze through,” Ramseur said.

The third quarter ended scoreless, which kept the score at 28-20 and the Trojans were driving down field.

Lozada found the end zone for the second time of the night quickly in the fourth quarter on a 1-yard touchdown rush to extend the Oak Ridge lead 35-20 with 11:21 to go in the game.

Monterey Trail didn’t give up the fight as they responded on the next drive when Timonin found Brown for the third and final time of the night to cut the Trojan lead to 35-27 with 8:14 left in the game.

The Mustangs were able to stop Oak Ridge on the ensuing possession and made them punt the ball back to Monterey Trail.

With the wind at their backs, down one possession and a section championship on the line, the Mustangs had the movie-story line written for them.

The Trojans prevailed and were able to stop Monterey Trail on a fourth and long to eventually run out the clock and win their first section title in school history.

Monterey Trail head coach T.J. Ewing said his guys left it all on the line.

“It’s a tough loss and the guys battled all the way until the end,” Ewing said.

The Mustangs lost 18 seniors from last season’s roster and brought back 12 returners this season.Ewing said one word to describe this year’s group is, “Shocking.”

“Everyone of those guys played a huge role,” Ewing said.

He added that the main goal he wants is a section title.

Monterey Trail senior linebacker Marcus Jones Jr., who had 387 tackles in his career going into the game Saturday, couldn’t express anything but gratitude for his coaches and fellow players.

“Coach (Ewing) is the man,” Jones said. “He cares about you and makes you one of his own.”

The brotherhood that Jones and Ramseur expressed postgame about the Mustang roster is not just year-to-year, it’s a lifetime.

Brown, who will be one of the senior leaders next season said that he is going to continue to grind in the off-season and be ready for next year.

He added one thing he learned from the senior leaders this season was to stick together.

“The more you’re together, the better the team plays,” Brown said.