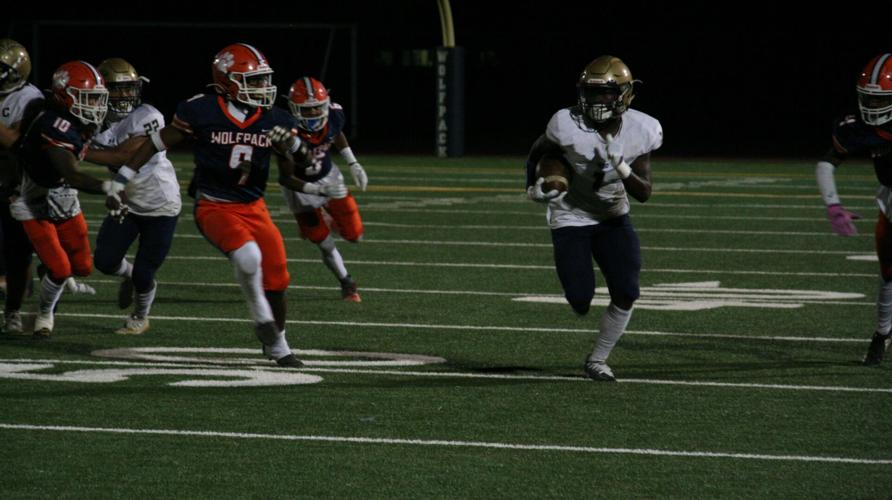 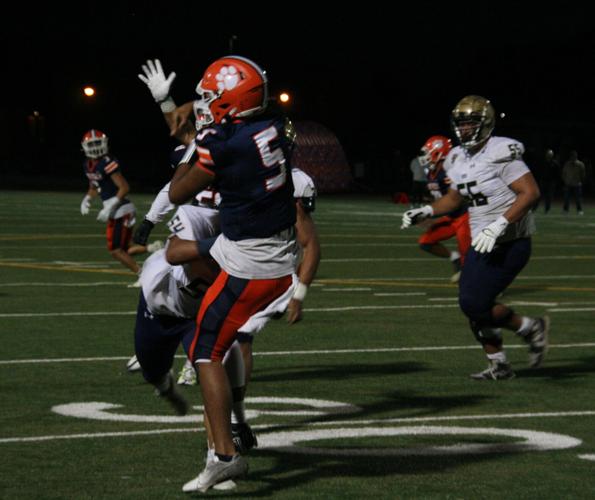 Ranvir Mahli gets off a pass despite the pressure of Elk Grove’s Isea Liu. The Herd picked off Mahli twice in their 49-14 win over Cosumnes Oaks Friday.

Ranvir Mahli gets off a pass despite the pressure of Elk Grove’s Isea Liu. The Herd picked off Mahli twice in their 49-14 win over Cosumnes Oaks Friday.

Game Notes: Cosumnes Oaks had a 6-0 lead midway through the second quarter, then quarterback Ranvir Mahli was intercepted by the Herd’s Lati Vaefaga who returned the ball 95 yards for a TD. Moments later, Wayshawn Parker scored on a 65-yard toss sweep and Elk Grove led 14-6 at halftime.

Parker wasn’t done. He added TD runs of 43, 80 and 24 yards to his game resume. The only scored Cosumnes Oaks could add was a Jeremiah King 52-yard sprint.

Herd coach John Heffernan on Vaefaga’s 96-yard pick six: : “That was the play of the game. That changed everything. We needed that because we were flat, we weren’t executing very well. They came out, cut our inside guys, which is hard to do because we’ve got some big guys inside. We tried working outside, but we didn’t look very comfortable early. And, I think that was me. My whole thought process was to keep it close, to not to do very much, give them anything early, then we got the (first Parker touchdown) right before half which was huge.”

Wolfpack coach Martin Billings: “(Vaefaga’s interception) definitely changed the momentum of the game and then we gave up another big run by (Parker) and then we just never recovered from that. Coach Heffernan and his staff did a good job of adjusting to what we were doing and then their physicality played a huge part in their success.”

The Marauders pulled away from a tight game with a pair of fourth quarter touchdowns. Devin Green scored on a 52-yard run in the first quarter and a 21-yarder in the second. Jesiah Machado hit Scott Nixon on a five-yard TD pass in the third quarter. But, Machado was sacked five times by the Jesuit defense in the game.