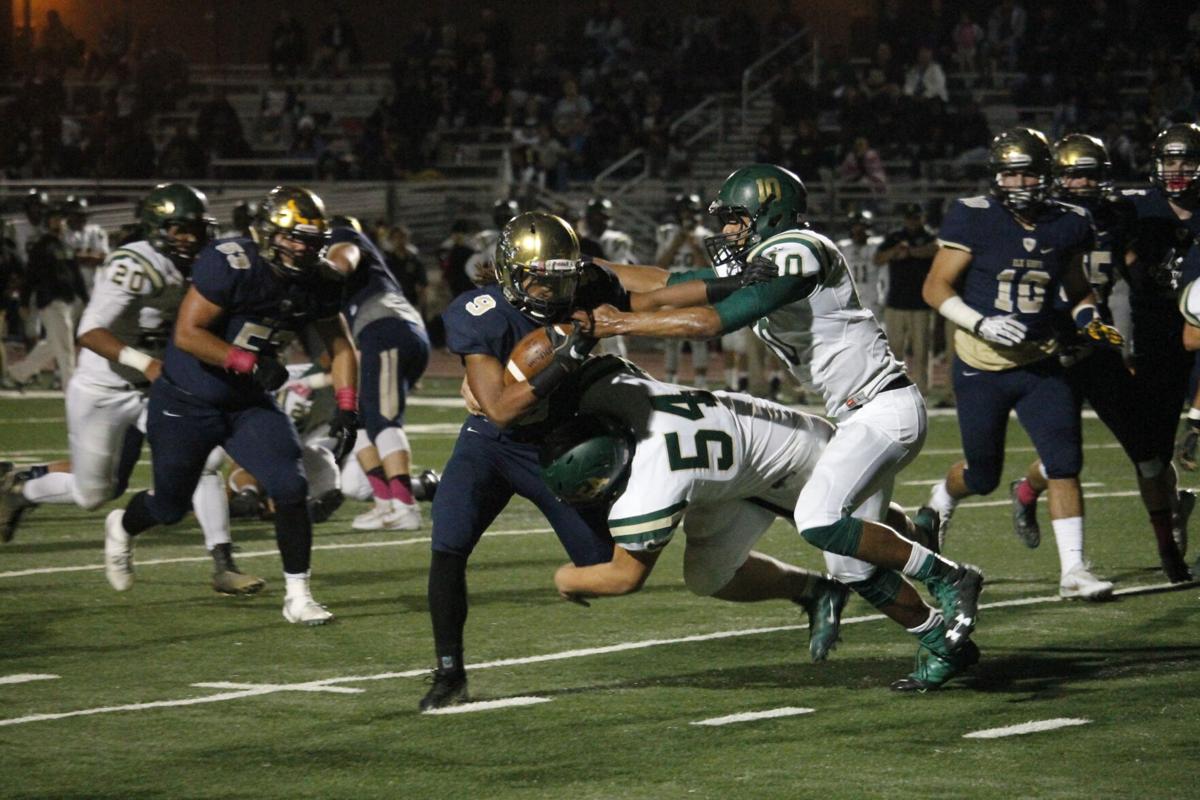 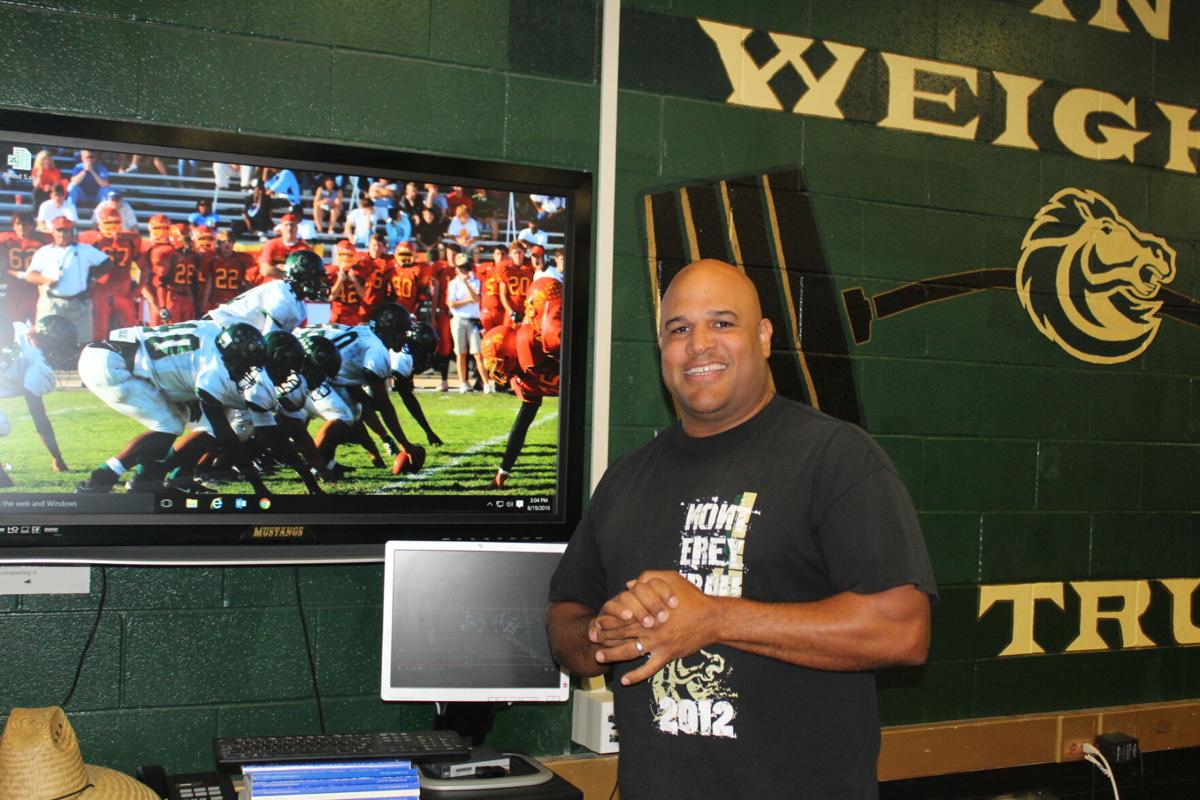 The only football coach Monterey Trail High School has had is T.J.  Ewing. With a win Friday against Elk Grove in the Sac-Joaquin Section’s Division II semi-finals the Mustangs will play for a Section football championship three years in a row. 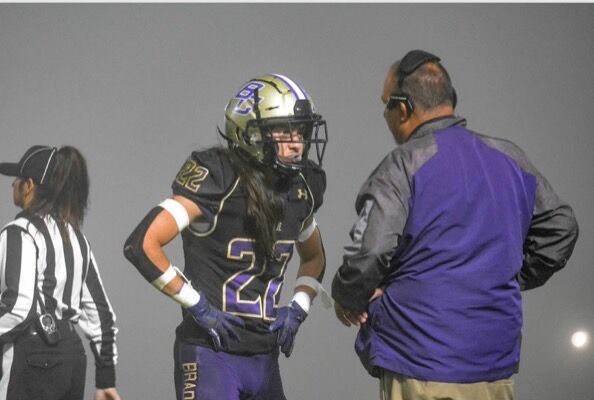 The only football coach Monterey Trail High School has had is T.J.  Ewing. With a win Friday against Elk Grove in the Sac-Joaquin Section’s Division II semi-finals the Mustangs will play for a Section football championship three years in a row.

The Sac-Joaquin Section’s Division II semi-final football game Friday between Elk Grove and Monterey Trail could be described as a showdown between a pair of “bracket busters.” In last Friday’s second round of playoff games, the Mustangs, the 7th seed, upset No. 2 Granite Bay and former EGUSD coach Joe Cattolico, 35-24.

Elk Grove, a six-seed, also pulled an upset by outlasting No. 3 Vacaville in a track meet, 52-48.

Now these two EGUSD schools and both with vaunted ground games will face off Friday at 7 p.m. in what could be called – excuse the very old football metaphor – a “three-yards-and-a-cloud-of-dust” game. But, Thunder Stadium, site of Friday’s contest, has a new artificial turf field, so perhaps we need to say, with tongue in cheek, “three yards and a cloud of recycled cork.”

Both schools’ offensive playbook just really doesn’t call for throwing the ball but two or three times in a typical game. TJ Ewing, the 18-year Monterey Trail head coach, claimed this week that a referee last Friday remarked to him at halftime in Granite Bay how much he enjoyed officiating, “this kind of game, it’s like the old days, with two-back offenses.”

“He loved it,” Ewing chuckled. “This was a good ‘ole high school throwback game because both teams run offenses with two backs, rather than one back. That was cool to there’s still a little bit of tradition still available for football fans to enjoy.”

Cattolico has taken his basic run-oriented game we all saw at Pleasant Grove and at Sheldon with him to Granite Bay.

“It’s his dad’s old offense,” Ewing claimed. “We’ve seen these plays all before.”

Heffernan’s Thundering Herd rushing attack behind the huge line of “Hammerheads,” the nickname given the offensive line, amassed a whopping 559 yards on the ground in Vacaville, a season high. Quarterback Ethan Archuleta had a memorable game with 242 yards on 21 keepers and three TDs.

The Herd runs what’s called a “flexbone” offense with lots of deception, misdirection and quick pitches with multiple options on each play. The Mustangs run a tight veer with a pair of running backs and depends upon deception, quick execution and just plain straight-ahead “big-on-big” blocking.

Both teams keep an eye on defensive backs for the moment they ignore an end. That’s when the play-action play is called and the ball is thrown. Many times that play ends up being a big-gainer, even a touchdown. It has not been unusual for Archuleta and his counter-part at Monterey Trail, Frank Arcuri, to have as many TD passes as pass attempts in a game.

Barring another night of dense fog or something else stopping the clock from running, we all may be home in time to watch Sports Center Live.

This friendly rivalry between Ewing and Heffernan goes back to their playing days. Both grew up in the San Mateo area and both began coaching in that area. Through the years their teams have scrimmaged each other, going back to the seasons Heffernan coached at Luther Burbank where he had a run of many Metro Conference championships.

But, perhaps the biggest game in this pair’s competition will be Friday’s. That’s because the Mustangs want to make it three straight appearances in a Sac-Joaquin Section championship game. The last two were in Division I.

Elk Grove is considered the defending Division II champion having won in 2019. The COVID-19 pandemic didn’t allow any high school playoff games in 2020.

Tornatore hard to stop at Bradshaw

Division VI top-seed Bradshaw Christian will once again face a team twice this season. The first time was in last week’s second round of the playoffs against No. 8 Linden. The Pride won 36-33 on Nov. 12, but in the season opener on Aug. 27 Bradshaw on the road in Linden defeated the Lions, 30-17.

This Friday, Bradshaw will have to do it all over again when they host fellow Sierra Valley Conference member Rosemont in the semi-finals.

“Another chance at someone we already played against,” head coach Drew Rickert recalled of the Pride’s 36-12 win on Oct. 29. “We played them well last time. We had a couple breaks go our way. I don’t think it will be the same blow-out like we had last time because we had three onside kick recoveries. The chance of that happening again, slim.”

They’ll have to stop Pride running back Anthony Tornatore who rushed for 191 yards and two TDs last week. The senior was pumped up afterwards in talking about his team’s win.

“It’s hard to beat a team twice, we had to pick it up in the second half and we had a lot of people who haven’t been in the playoffs,” he explained.

Tornatore led all Elk Grove-area running backs with 1,402 yards rushing in ten games this season. He and most of his teammates have had to play both ways this season. That’s because Bradshaw has suited up between 16 and 18 players a game. Still, the Pride sits on a 10-1 record going into Friday’s semis.