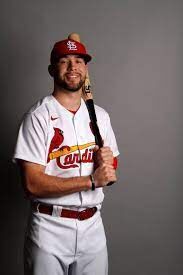 In his rookie season, Dylan Carlson played about every outfield position for the St. Louis Cardinals batted .266 with 18 home runs and 65 RBIs. On Wednesday he leads his team into the National League Wild Card game in Los Angeles against the Dodgers.

In his rookie season, Dylan Carlson played about every outfield position for the St. Louis Cardinals batted .266 with 18 home runs and 65 RBIs. On Wednesday he leads his team into the National League Wild Card game in Los Angeles against the Dodgers.

J.D. Davis’ Major League Baseball season likely concluded Sept. 26, and according to the New York Post, it’s possible he has played his last game for the Mets.

The team placed the former Elk Grove High School infielder on the 10-day injured list with a left hand sprain — Davis’ third trip to the IL this season. Davis has appeared in only 73 games, and recently lost his starting position to Jonathan Villar. Reading the social media posts of the rabid Mets’ fans, he’s had discomfort all season long in gripping the bat.

Davis told NorthJersey.com on Oct. 2 just before the Mets game with Atlanta that he would have surgery on the hand Oct. 5 in Dayton, Ohio, to repair the ligament between the middle and the ring finger on the left hand. Davis said he’ll have a splint on the hand four to six weeks and should be able to grip a bat after that. But, he claims he’ll be ready for spring training.

Davis missed 2 ½ months with the injury, returning after the All-Star break as part of the third-base mix. He also spent time on the IL in early April, after he was drilled in the left hand by a pitch. Davis owns a .285/.384/.436 slash line with five homers and 23 RBIs.

The Post reported last week that the arbitration-eligible Davis is among the players on which the Mets will have to decide for 2022.

Dylan Carlson is the first rookie in MLB history to homer from both sides of the plate in the same game multiple times in a single-season. He drilled a pair of homers in a 4-3 win on Sept. 30 in a game with Milwaukee. That’s a pretty impressive mark for Carlson, figuring that the switch hitters in the Hall of Fame are guys like Mickey Mantle and Eddie Murray.

In the game he also surpassed Cardinal great Stan Musial for most extra base hits in a rookie year with 53.

Now, Carlson and his St. Louis teammates are headed into the post-season as a wild card team.

San Francisco 49ers defensive end and Pleasant Grove High School graduate Arik Armstead made a visit to Sacramento Sept. 28 to donate funds for middle and high schoolers. In partnership with Mercy Housing, an affordable housing developer in the Greater Sacramento area, Armstead gave $250,000 as part of his “Armstead Academy” after-school program for 7th through 12th graders.

The money will pay for staffing supplies and field trips.

“Me being able to have the platform I have and being able to influence and have an impact, my voice mattering to them is a true blessing that I don’t take for granted, that I want to use for positive things,” Armstead explained at a news conference.

Drafted by the Niners and signing a second contract with the team is what Armstead said made a perfect combination for his work on and off the field.

“You know, even being able to be here today in Sacramento is not something I would have been able to do if I didn’t play for the Niners,” Armstead added.

He was the head coach of cross country and the distance track coach at Sheldon for 24 years. Years ago he organized the Sheldon Distance Carnival, designed for the longer running events of track and field. He won the Coach of the Year honor several times, the most recent in 2019.

Rogers was eulogized, “He was always there for his runners, studying their times and encouraging growth and teamwork….if a runner did not have proper running shoes, he took them shopping and made sure they got what was needed.”

Sheldon will hold a 5K run in Rogers’ memory on Saturday, Oct. 16 at 8 a.m. A celebration of life will follow in the school quad.

Elk Grove H.S. grad Aaron Hoffman didn’t exactly have the result he wanted this past week at the Professional Long Drive Championships in Nevada. He opened the four-day event by finishing seventh overall thanks to a 395-yard drive. Hoffman then advanced to the grou of the final 64 competitors and just couldn’t manage a drive over 345 yards. He ended up 12th overall, but only the top eight in his group advanced in the tournament.

Hoffman can brag that he did compete in one set alongside PGA Tour star Bryson DeChambeau. That was the round where Hoffman belted his best drive, but DeChambeau had a 412-yarder in that set.