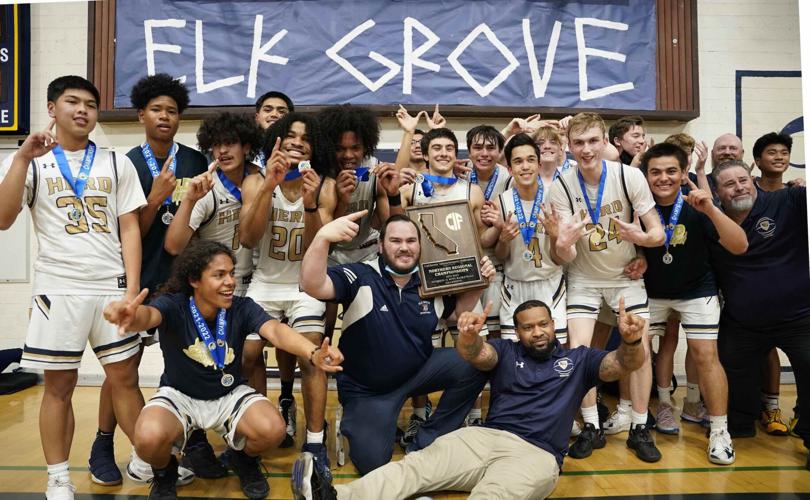 Elk Grove won the CIF Division II NorCal Championship (pictured) and the State Championships, but just six of the 14 players return this season. 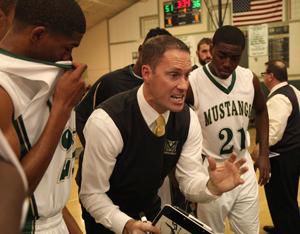 Ken Manfredi, shown here when coaching at Monterey Trail, has started his eighth season at Franklin with a win at Gregori and a loss at St. Mary's.

Elk Grove won the CIF Division II NorCal Championship (pictured) and the State Championships, but just six of the 14 players return this season.

Ken Manfredi, shown here when coaching at Monterey Trail, has started his eighth season at Franklin with a win at Gregori and a loss at St. Mary's.

The boys basketball season will officially tip off with Monday’s Foundation Games, the annual fundraiser for the Sac-Joaquin Section’s Dale Lackey Scholarship Fund. Locally, there’s promise abounding with Elk Grove coming off the CIF Division II State Championship trophy still shiny on a shelf somewhere in the James ‘Bill’ Cartwright Gymnasium. Sheldon looks ready to defend the Delta League championship with the players from an undefeated junior varsity squad now up a level to varsity. Toby Johnson Middle School went unbeaten a year ago and most of those freshmen are now at Franklin and already playing on the Wildcats’ varsity.

But, all these squads may be looking up to Monterey Trail when the Section playoffs get underway come February. The Mustangs return high scoring forward Varick Lewis, who is already signed to attend Long Beach State. But, alongside of him might be some formidable re-enforcements. Five boys with varsity experience at other area schools have transferred in – Derron White and Rashawn Inglemon from Sheldon, Damarion Vann-Kelly from Capital Christian, Chey Winrow and, perhaps the most talented of them all, Benjamin Roseborough. He was at Sacramento High School, then attended Prolific Prep in Napa last season. Now, he’s returning to the Elk Grove-area and has applied for eligibility with the Section. As of Monday, his application to play this season for the Mustangs along with Winrow’s are pending.

White, Inglemon and Vann-Kelly all have to wait through the “Sit-Out Period” and will become available for head coach Robert Fields on Dec. 31.

Potentially, the Mustangs have the talent to challenge Grant, the defending Division II Section champion, for the Metro Conference championship and the rest of the EGUSD schools in the Division I playoffs.

Ken Manfredi has already begun his eighth season at Franklin with a win at Gregori and a loss at St. Mary’s. He really didn’t plan it this way, but the Wildcats’ pre-season schedule has 16 of its first 17 games on the road. He says it’s going to get his squad prepared for some of the best basketball talent in Northern California.

Plus, with a couple of the Johnson Middle School team now in high school and playing varsity, a long with three sophomores and five juniors, Manfredi says this is the youngest varsity squad he has ever coached.

“This is year 18 as a varsity coach and with that comes a lot of excitement and a lot of growing,” he said. Manfredi previously coached at Monterey Trail.

“There will be nights where we’ll learn on the fly, but there are nights where our youthful talent will show promise of the future and there will be moments when we’ll have humbling moments of the present. But, this is a group that is young and is coachable and likes each other.”

With the buzz and afterglow of a CIF State Championship still burning around Elk Grove, Dustin Monday along with longtime assistant Torrence Green has feverishly prepared for this season. The Herd graduated eight players off the championship team of a year ago, so this looks to be a rebuilding year at Elk Grove. They opened with a 33-point loss to Manteca but came right back to defeat River City by 21.

“Those other six guys who were replacements last year are back and playing for us now,” Monday said. “We’ve got pieces to fill in and we’re shorter, but we’ve got some guys who can play.”

Monday has, with the change in personnel, changed the look of his team from a year ago.

“We have a new system in place and we’re doing some things that, in my career, we’ve never done,” he said. “Some new things and some new tricks that we hope will work.”

Junior Vinnie Gonzales is leading Elk Grove in scoring with a 19.0 points per game average in the first two contests. Nick Cherny, also a returnee, along with Ryan O’Sullivan and Hunter Rath are seniors on the Herd squad.

“We have some versatile, tough guys who can fill up a stat sheet,” Monday said.

Both coaches think the road to the post-season will run through Sheldon, who has won two of the last three Section Division I championships, and Jesuit, where perhaps the top player in the Delta, Andrej Stojakovic, resides.

“It’s going to be a two-horse race between Jesuit and Sheldon and then it’s a dog fight for the other two playoff spots,” Manfredi said.

The Delta League will qualify its top four teams for the post-season.

The potential for a Section championship amongst one of the Elk Grove Unified schools does exist, but the defending Division I champions at Modesto Christian lurk in the shadows returning players such as 6-3 guard Jamari Phillips, 6-6 forward Manasse Itete and 6-10 center Prince Oseya.

Basketball Transfers for the 2022-2021 season. Sit-out period for basketball means the athlete cannot participate in any varsity games until 12/31/22.