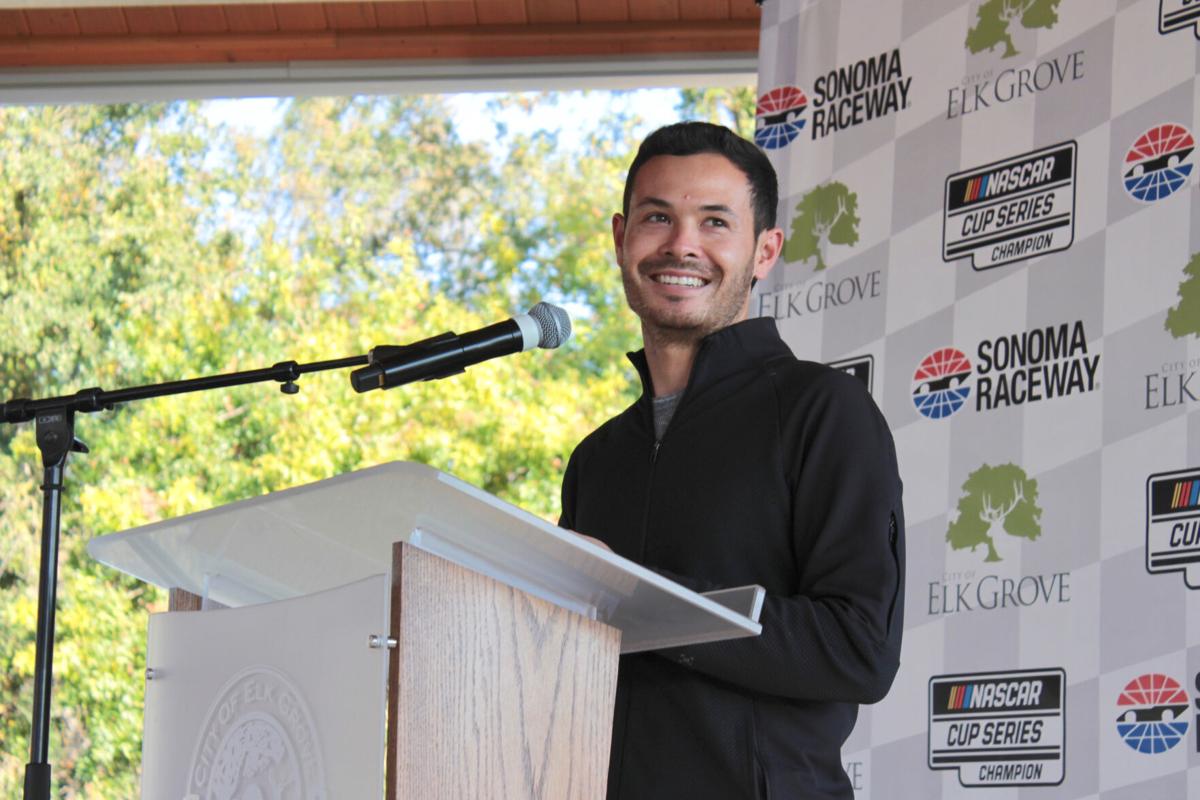 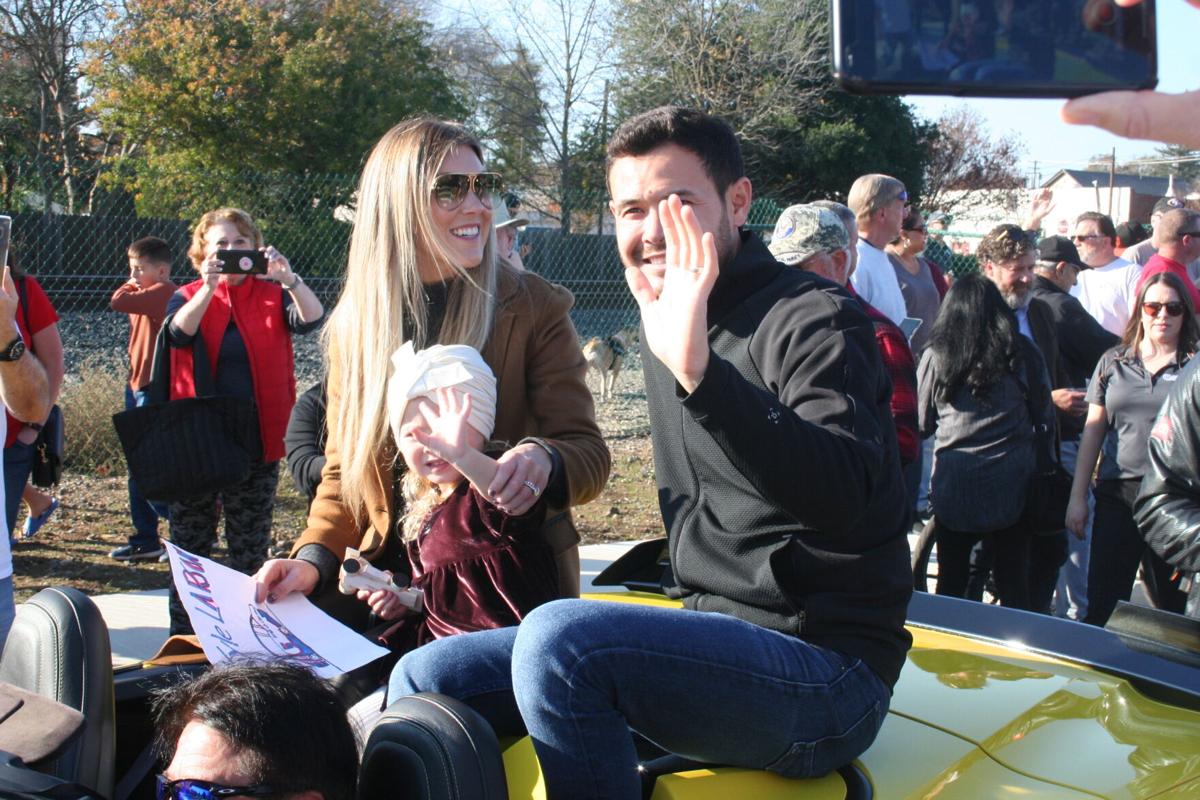 Kyle Larson with wife Katelyn and daughter Audrey were riding atop the back seat of a yellow Corvette Monday in a parade on Elk Grove Blvd. in his honor. Larson, who graduated from Pleasant Grove H.S., won NASCAR's Cup Series Championship this season. 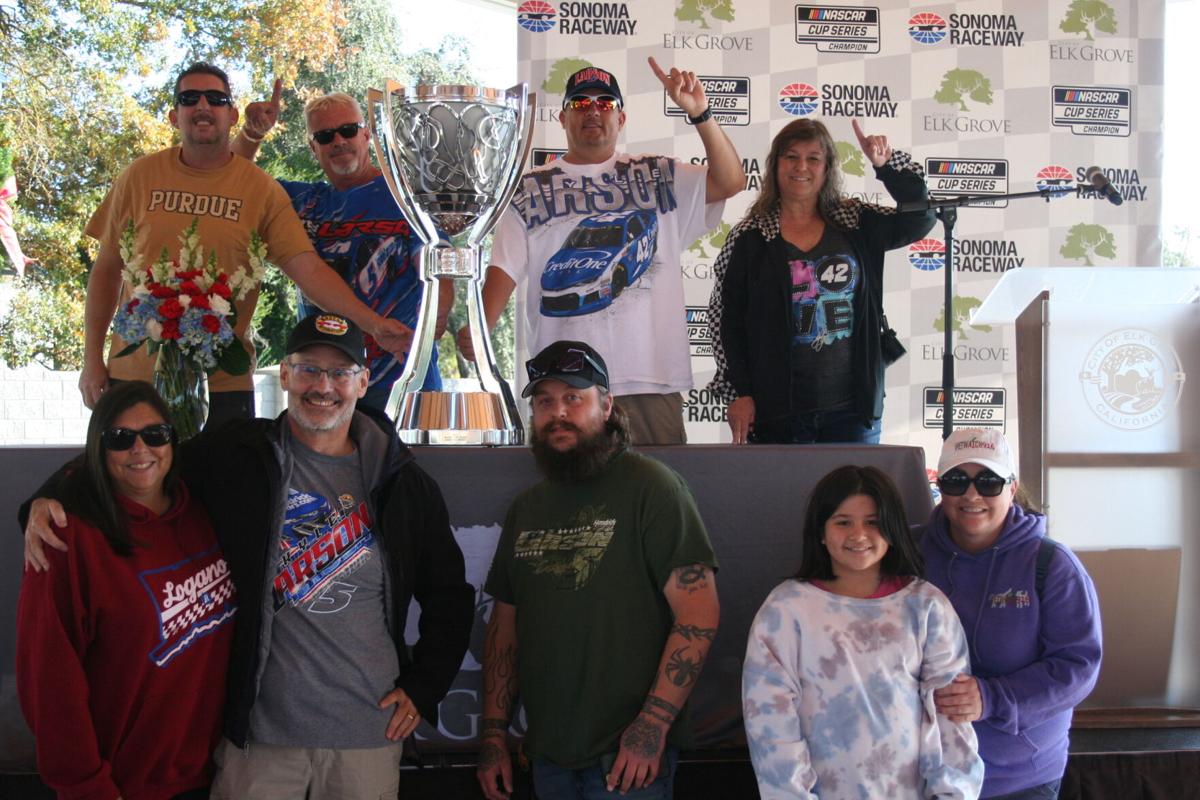 In a celebration in honor of Elk Grove driver Kyle Larson, organizers set up the NASCAR season championship trophy for fans to take photos next to. 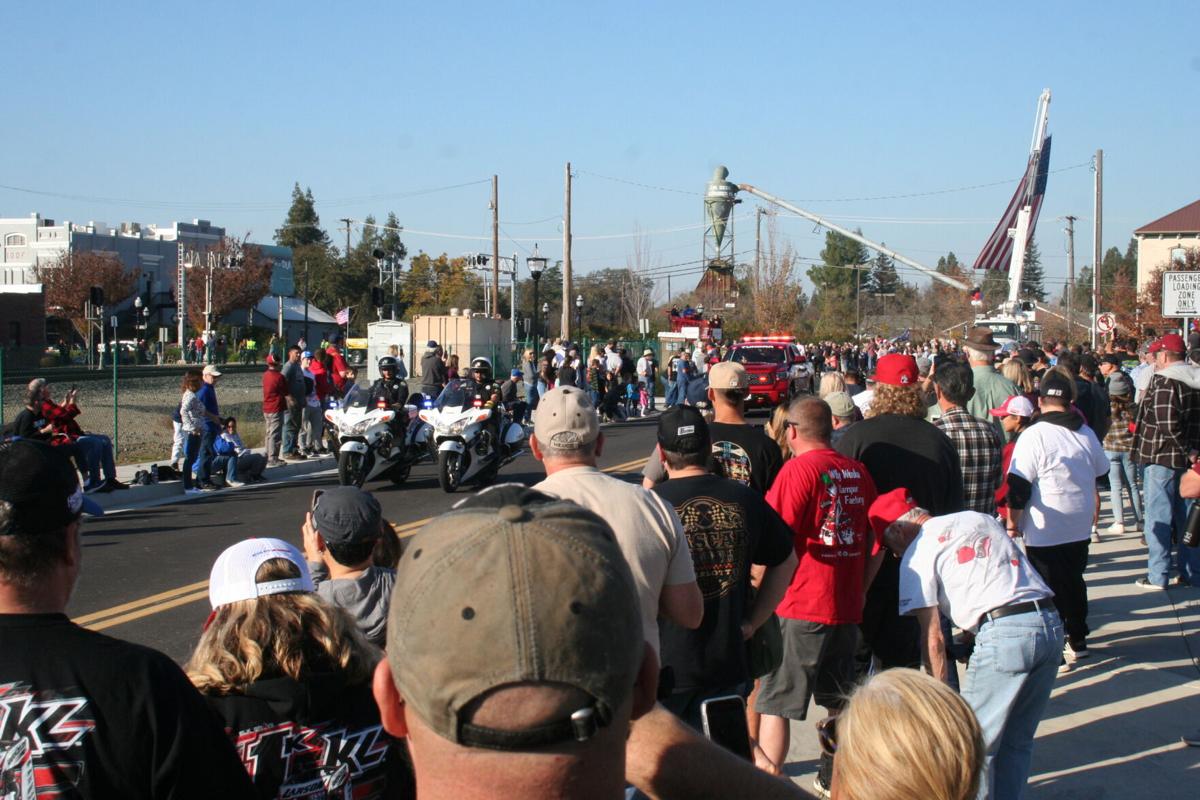 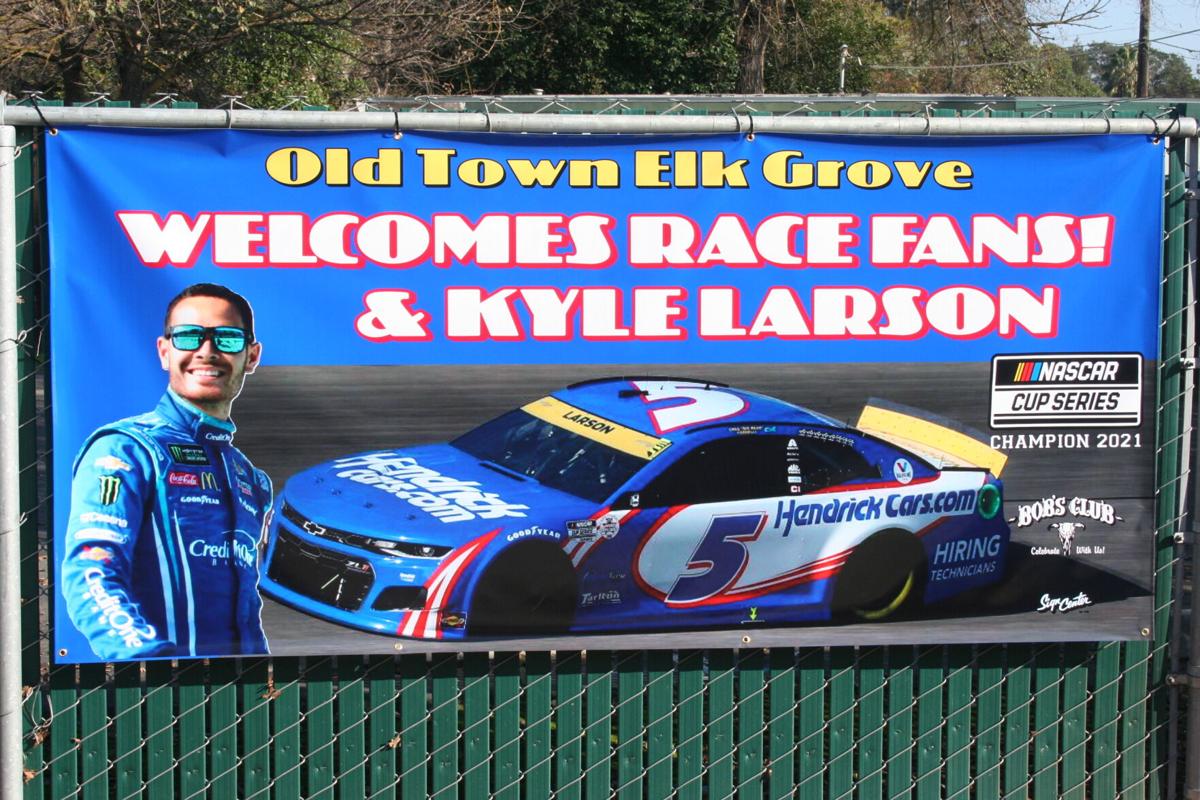 Kyle Larson with wife Katelyn and daughter Audrey were riding atop the back seat of a yellow Corvette Monday in a parade on Elk Grove Blvd. in his honor. Larson, who graduated from Pleasant Grove H.S., won NASCAR's Cup Series Championship this season.

In a celebration in honor of Elk Grove driver Kyle Larson, organizers set up the NASCAR season championship trophy for fans to take photos next to.

November 22, 2021 will go down in local history as “Kyle Larson Day” in Sacramento County and in particular, the City of Elk Grove. A crowd jammed into the City’s newly constructed Old Town Plaza cheered in agreement as Sacramento County Supervisor Don Nottoli made the announcement and handed a framed certificate to 2021 NASCAR Cup Series champion Kyle Larson Monday afternoon.

“Elk Grove is my home and will always be my home!” the 29-year-old declared to his local fans, to a rousing cheer. Many of those in attendance were wearing No. 5 Kyle Larson t-shirts, the now-familiar No.5 blue cap he wore this past season around NASCAR tracks and other keepsakes honoring the Hendrick Motorsports star driver. This season Larson drove his No. 5 Chevrolet Camaro into Victory Lane 10 times, the most important being the season finale at Phoenix Raceway on Nov. 8.

Sonoma Raceway combined efforts with the City of Elk Grove to honor its native son with a parade that started near Elk Grove-Florin Road and slowly moved east on Elk Grove Blvd. to the Old Town Plaza. Larson, wife Katelyn and daughter Audrey sat atop the back seat of a yellow Corvette convertible, with wide smiles and waves to the local fans. Son Owen rode atop the Save Mart motorized grocery cart, a vehicle in the small parade.

As the ‘Vet neared the Old Town Plaza, the car was forced to slow down because so many people, cellphones in hand, were stepping in front to grab a shot of their racing hero.

Atop a small stage brought in just for the event with the silver NASCAR Championship trophy in full display, Larson was revered in a ceremony emceed by City Councilman Pat Hume.

“This is pretty overwhelming,” Larson told the crowd. “I didn’t expect to see so many here. It was crazy coming down the road seeing so many familiar faces, friends, family, people who I saw at the dirt tracks.”

Elk Grove Mayor Bobbie Singh-Allen energetically thanked Larson for being a leader and showing courage through the ups and downs of the past two years of his career, which included several months during 2020 when he was suspended by NASCAR for making a comment during a televised iRacing event during the pandemic when there were no organized sporting events.

“Obviously the last two years has had some of the lowest and darkest days of my career,” he admitted during a media session after the event. “There was a lot I learned through that experience by putting myself into other people’s shoes. I did not know I would be where I am today, a year-and-a-half later. A lot of work, a lot of support from a lot of dear people allowed me to get back on my feet and get going again.”

Larson admitted the realization he is a Cup Series champion has finally sunk in.

“With this event and all the stuff I’ve done, yeah, it’s all really sinking in,” he said. “Every day that comes by you just enjoy it more. Thankful I got the opportunity to win the Cup

Championship and for everybody to who put this event on.”

Larson has finished off two years of some of the best racing he’s driven, and not just in the stock cars on pavement. On the dirt tracks over the past calendar year he’s won several big events such as the Knoxville Nationals and Kings’ Royal at Eldora Speedway in Ohio. Last Friday he took the Friday night main event at the Hangtown 100 at Placerville Speedway, driving a midget racer. In 23 events on dirt tracks in 2021, he has won 11.

“I’ve won the last two and, honestly, could have won the last four,” Larson said. “I feel good every time I go there. Nice to get some races in our car this week to learn what we can and get better.

Larson’s local fans have also been visible around the country where NASCAR runs races, he said.

“I’ll be at a NASCAR track somewhere and people come up to me and say, ‘Hey, I’m from Elk Grove and we’re pulling for you,’” he said. “Elk Grove isn’t that big of a place, but lots of people from here show up at the track. Being here today show you how race fans are.”

Blown away with the crowd today!!What a special day sharing this moment with everyone! Elk Grove is home. Thank you @RaceSonoma for being a part of it! pic.twitter.com/a9lLZW3Ymq

Now firmly entrenched into the Hendrick Motorsports family of NASCAR Cup teams, Larson may be the odds-on favorite to win the championship once again in 2022.

“It’s been awesome to be in great race cars, great races and cap it all off with a championship,” he said, then chuckled, “I hope to repeat it down the road and chop off a lot of wins.”