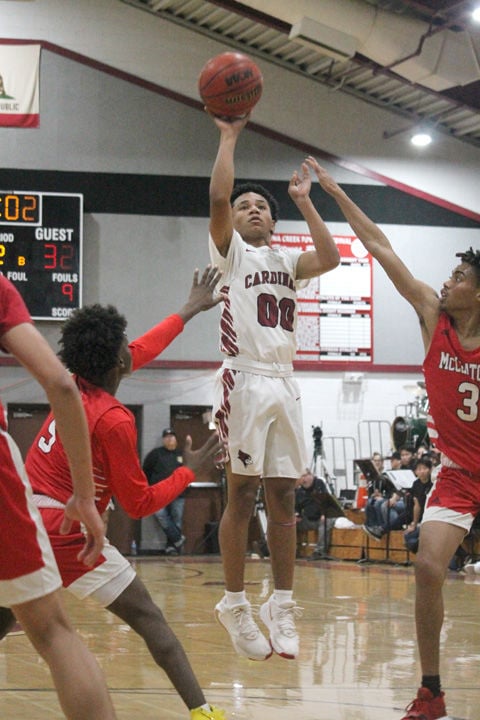 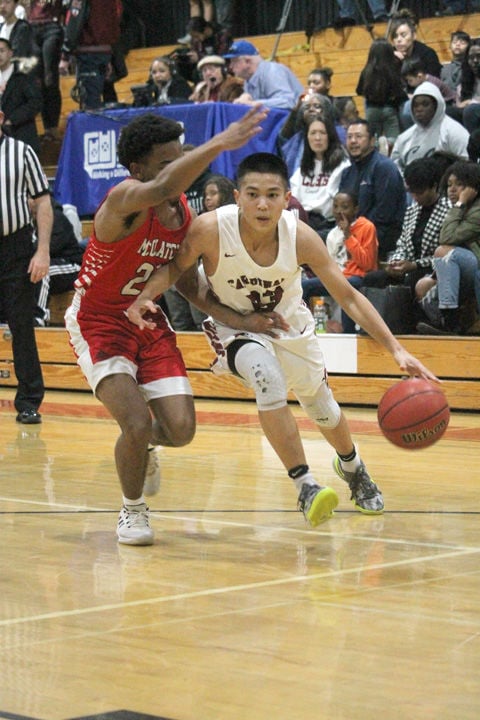 With only three seniors on the team, Laguna Creek’s youth showed during their non-league schedule.

The Cardinals went 4-12 in non-league play but knew by playing the amount of games they did with a young team could only benefit them.

The important thing with a young team is to get as many players as possible experience on the court to learn and grow from.

As Laguna Creek is starting to get into its Metro League schedule, the Cardinals are starting to show that playing as many games as possible is paying off.

Behind a huge performance from senior wing player Kaleb Drake, Laguna Creek was able to beat McClatchy and improve to 2-1 in Metro League play with a 80-76 victory last Friday night at Laguna Creek High School.

“I think we played great and I think the atmosphere in the gym gave us some positive energy and the guys were flying around out there,” said Laguna Creek head coach Mike Gill.

“This is the most points we have scored in a game this season and we needed every one of them because McClatchy gave us a tough game.”

The Cardinals, and Drake in particular, were very efficient in the first quarter, which allowed Laguna Creek to establish a tone early.

Drake scored 16 of his 27 in the first quarter alone as the Cardinals jumped out to a 10-point lead after one quarter.

“Being our captain he really put the game on his shoulders early and came out strong and made some tough contested shots,” Gill said.

Although Laguna Creek maintained the lead throughout, the Lions would not quit.

Like the Cardinals, McClatchy is a young team that only starts one senior and has a lot of quickness on the perimeter.

Sophomore guards Jameel Pongyan and Gemini White were able to consistently get to the basket and get Laguna Creek into foul trouble in the first half.

In the second half, McClatchy was able to come-from behind and tie the game at numerous times.

At one point, Laguna Creek held a seven-point lead midway through the fourth quarter and the Lions were able to tie the game with just over two minutes left at 70-70.

Even though McClatchy had the momentum, it was the Cardinals that were able to handle the pressure best, in due part to sophomore guard De’Vonni Radford’s big fourth quarter.

“I told the team to force McClatchy to go left offensively and I tried to give them the confidence to know that they can win the game and get the job done when we needed them to.”

Radford scored 10 of his 26 points in the fourth quarter. Eight of those points came after the game was tied with two minutes left.

“He did a great job of being in control and getting to the basket and getting some and ones,” Gill said.

Radford is a quick and strong guard who uses his strength to get to the basket and finish while drawing contact.

The young Cardinals have been battle tested so far, but will face a huge test in the Metro League.

Laguna Creek’s next five games are all on the road and include Metro-League leaders Burbank and Monterey Trail.

“I kind of look forward to it because I think our defense is playing good and that can travel on the road,” Gill said.

“Everything we try to do is centered around our defense and hopefully that will be able to get our offense going as well.”