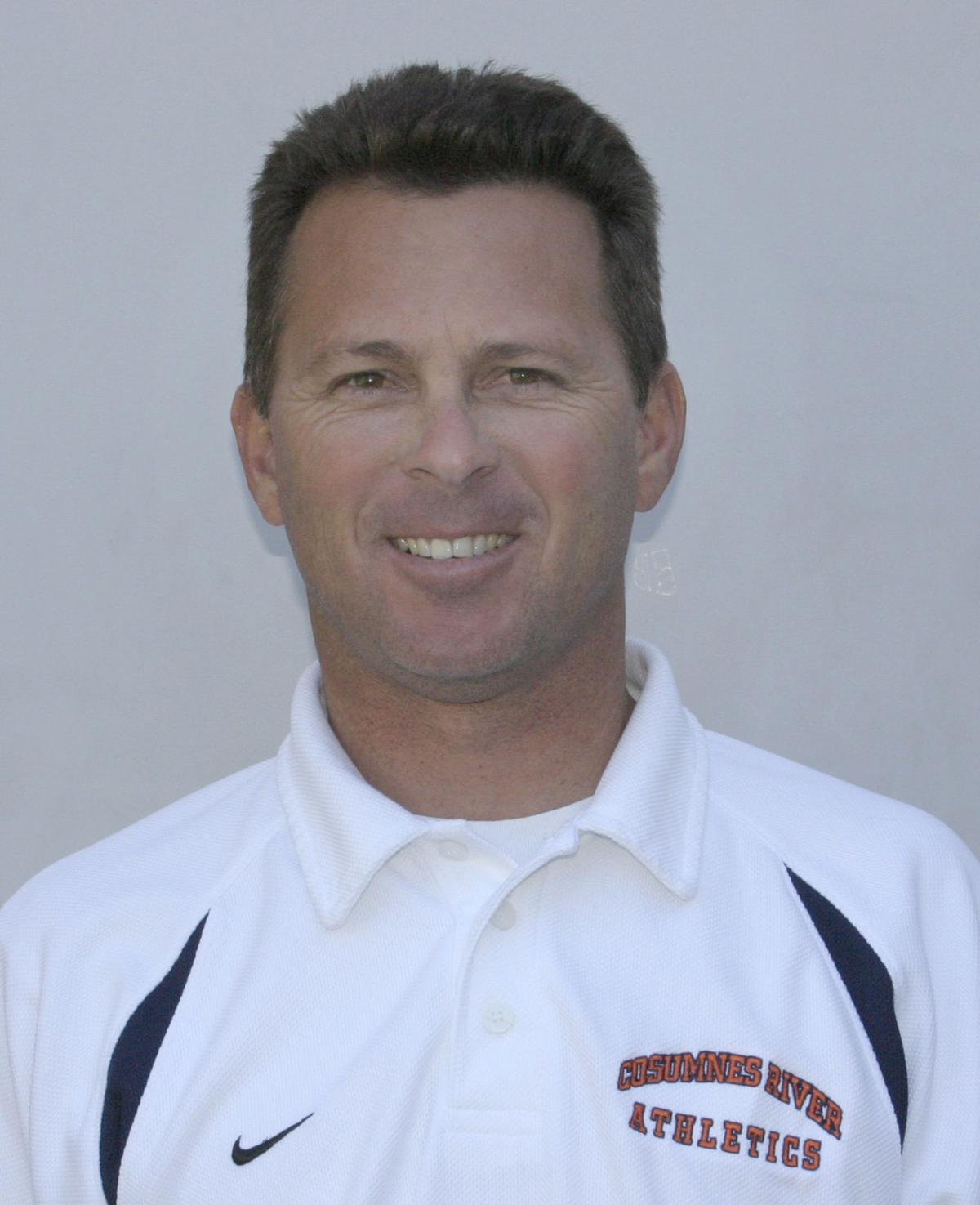 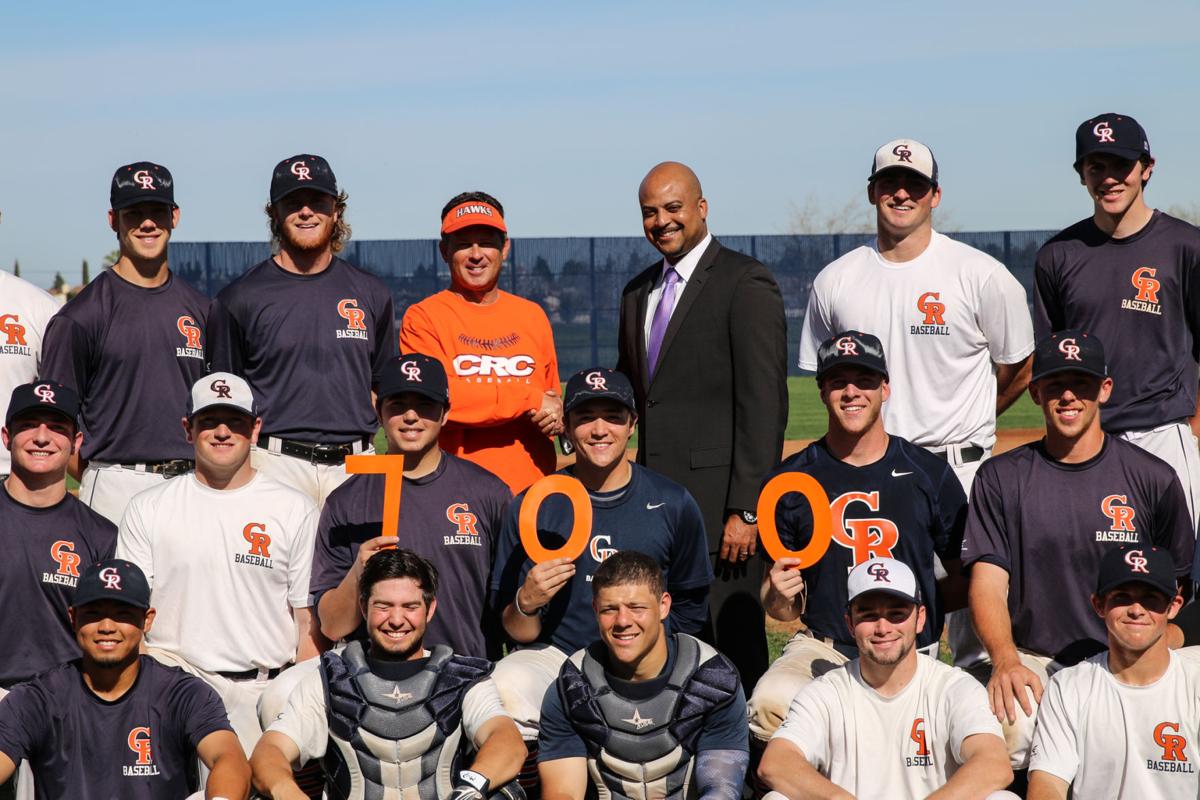 Tony Bloomfield (in orange, back row) celebrated with his team and CRC president Edward Bush in 2016 after coaching his 700th career win of his career. Bloomfield is stepping down as head coach at the school after 19 seasons.

Tony Bloomfield (in orange, back row) celebrated with his team and CRC president Edward Bush in 2016 after coaching his 700th career win of his career. Bloomfield is stepping down as head coach at the school after 19 seasons.

Cosumnes River College’s long-time head baseball coach is heading back to the classroom after 32 years leading the Hawk’s team to several conference championships and a historic state championship.

With more than 700 winning games under his belt, Tony Bloomfield is one of the most respected and successful coaches at the California Community College level, compiling an overall record of 733-419-2. Bloomfield credits his assistant coaches and the support staff at the college for his winning team.

“I am very proud of the accomplishments the baseball program has achieved during our leadership, guiding the program to 17 playoff appearances in 19 years, and winning the school’s only State Championship in 2012,” he said. “We made it a mission to give the student athletes the pathways to further their education by way of scholarships and transferring to four year institutions to pursue their educational dreams.

Equally impressive is the success of Coach Bloomfield’s athletes in the academic arena.  CRC baseball players go on to further their education consistently.  More than 60 have earned Academic All-Conference recognition.

“I like to think that I kept my word to the hiring committee back in the fall of 1998, that I'm here to help develop husbands and fathers, not just baseball players,” Bloomfield added.

Bloomfield added how proud he is of the young men who were drafted by the MLB, and a few actually made it to the major leagues. In 2009, David Hernandez became the first Hawk under Bloomfield to play in the major leagues.  Hernandez was a starting pitcher for the Baltimore Orioles during the 2009 season and is now with the Arizona Diamondbacks. There are three former CRC players who were in the majors at the end of the 2017 season.

Bloomfield started his coaching career at LA Harbor College as an assistant coach under the guidance of Hall of Fame Coach Jim O’Brien.  Following their 1990 State Championship, Tony took over and won four consecutive conference championships.  Bloomfield has earned nine Conference Coach of the Year honors, and in 1997 was the Male Coach of the Year in Southern California Athletic Conference. In his eight years at LA Harbor, Tony's teams had a record of 265-113.

In his career, Bloomfield has coached more than 100 All-Conference players, more than 20 All-Northern California players, more than 30 All-Americans, and 15 players who have played in the Division 1 College World Series.  Almost 40 players have been drafted, including six in the 1st 8 rounds.

Bloomfield played college baseball at LA Harbor College and the University of Nevada-Reno.  He earned his Master’s Degree from Azusa Pacific in 1992.

A teacher of the game, Bloomfield emphasizes academic success, responsibility, citizenship, and personal growth as the cornerstone of this coaching philosophy.  He teaches that success away from the field is just as important as success on the field.

Taking over for Bloomfield will be assistant coach Don Mico.

“It is a dream come true to be named the new head baseball coach at Cosumnes River College,” Mico said. “I cannot thank Coach Bloomfield enough for giving me the opportunity to be a part of the program and mentoring me throughout the last six years. I hope to continue Coach Bloomfield’s work and build the program.”

Bloomfield will stay on as a kinesiology professor at Cosumnes River College. He also plans on furthering his own education and spending more time with his family.

“Tony has been such a large part of CRC baseball throughout the years,” said Collin Pregliasco, Dean of Kinesiology, Health, Athletics and Athletics Director. “He accomplished so much as a coach both on the field with his record of success, but more importantly, with the influence he had over countless young men.  While he may be stepping down from coaching, we are looking forward to his continued contributions in our athletic department and kinesiology division.”

Pregliasco is excited that Mico will be taking over where Bloomfield left off.

“Don will continue the strong tradition of CRC baseball,” Pregliasco said. “He has a tremendous understanding of our program, serving as an assistant coach for the past years.  Don has extensive Sacramento ties and his coaching background makes him the ideal person to lead our baseball program. We are very excited to see baseball’s continued athletic and academic success with him as our coach.”