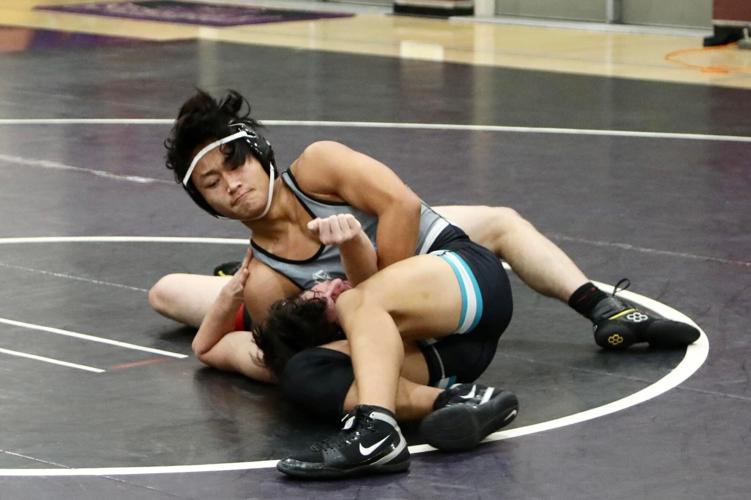 Vaying Xiong, a 147-pound wrestler from Sheldon High School, is about to pin an opponent during a recent Delta League dual match. Xiong hopes to follow his older brother, Sue Feng, to the California State Wrestling Championships. Sue Feng was the last Sheldon grappler to qualify for State and that was five seasons ago. 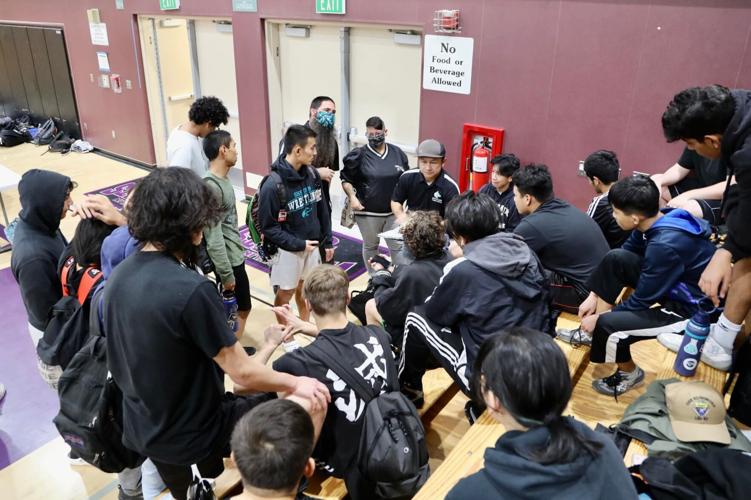 Ben Xiong gathers his Sheldon wrestlers around him following a double-dual win over Pleasant Grove and Jesuit on Tuesday. Those scores were Sheldon 48, Jesuit 27; Sheldon 54, Pleasant Grove 18

Vaying Xiong, a 147-pound wrestler from Sheldon High School, is about to pin an opponent during a recent Delta League dual match. Xiong hopes to follow his older brother, Sue Feng, to the California State Wrestling Championships. Sue Feng was the last Sheldon grappler to qualify for State and that was five seasons ago.

Ben Xiong gathers his Sheldon wrestlers around him following a double-dual win over Pleasant Grove and Jesuit on Tuesday. Those scores were Sheldon 48, Jesuit 27; Sheldon 54, Pleasant Grove 18

Wrestling in Elk Grove for years has been typically centered around the grappling squad at Elk Grove High School. And, for good reason. The Herd wrestlers have won every league/conference championship since 2001. Franklin has always had one or two guys every year worth paying attention to and this year may have a core of guys who may actually challenge Elk Grove to represent the Delta League at the Section Team Dual championships on Jan. 29 in Stockton.

However, before the League’s dual season is over, watch out for Sheldon. With the double-dual schedule a little more than halfway finished, the Huskies are undefeated, winning decisively over Pleasant Grove, Jesuit and Cosumnes Oaks. They were scheduled to wrestle Elk Grove in a double-dual two weeks ago alongside the Wolfpack, but the Herd was under COVID-19 protocol.

That dual hasn’t been re-scheduled. The Huskies will take on Franklin and Davis Jan. 26 and following that we’ll probably know who this season’s Delta League champion squad will be.

Sheldon’s wrestling coach Ben Xiong has a core of both boys and girls who are expected to place high come the Division I Individual Championships on Feb. 11 and then advance to the Sac-Joaquin Section Masters at the Stockton Arena Feb. 18 and 19.

First, though, Xiong has stressed the importance of staying healthy during this spike in COVID-19 cases.

“Communication has been key for us,” Xiong wrote in an email to the Citizen. “We have made sure to have solid communication with the wrestlers and parents. On a daily basis, the coaches are checking in on the wrestlers before and after practice to check in on their well-being, remind them to get tested, and to remind them of good hygiene practices. We've found that simple things like washing your hands, taking a shower immediately after practice, and don't share water are allusive to young kids. Similar to teaching wrestling technique, constant drilling of these basic principles to the kids makes it second nature eventually.”

For the most part Sheldon has remained healthy, and thus, able to compete in tournaments over the past month. A few tournaments, though, have been cancelled regionally.

“The number of cancelled tournaments has definitely been concerning,” Xiong said. “This year, Sheldon has the potential to send multiple wrestlers to the State tournament with multiple seniors who have been wrestling since grade school with a goal of making it to State. It would be heart breaking to have their goal shattered because of COVID-19.”

In the girls’ ranks Xiong is coaching one of the top wrestlers in the state at 101 pounds, sophomore Kaydance Vang.

“She was a middle school state champion and placed fourth at last year's State Finals,” Xiong said. “Kaydance will be entering the postseason with a 17-2 record with her two losses coming to the No. 1 and No. 3-ranked wrestlers in the state. Kaydance has had a highly successful season with a second-place finish at the Folsom Invite, first at the Panu Varsity Girls Tournament, first at Livingston Invite, first at Escalon, and third at the Brittany David Invitational.”

On the boys team, Xiong is looking for big things from junior Jacob Yang.

“Jacob is a two-time Masters qualifier and fell short to qualify for State by a match his sophomore year,” Xiong said. “Wrestling at 138 pounds most of this season and currently ranked 28th by The California Wrestler at that weight, he will be wrestling 134 pounds in the postseason. Jacob is also ranked No. 5 in Northern California by SportStars. He will be heading into the end of the season with a 24-4 record with 2 losses to state-ranked wrestlers and a third loss to the returning Nevada state champion.”

Caden Diamond is returning from a streak of injuries that prevented him to compete his freshman and sophomore season. The 134-pounder has turned heads this year by defeating multiple state-ranked wrestlers. He took first place at a tournament at Vista Del Lago High School this season.

Senior Vaying Xiong, who will be looking to compete at 147 pounds in the postseason, is a two-time Masters qualifier and has defeated state-ranked wrestlers this year. His brother, Sue Feng Xiong, was the last Sheldon male wrestler to make it to State. That was five years ago.

“He's hoping to follow in his brother's footsteps and gain a spot to compete at the CIF State Championships,” Xiong said.

The State Championships, as it has been staged over the years, will be in Bakersfield’s Rabobank Arena on Feb. 25 and 26.

John Hull has been a part of the sports scene in Elk Grove since moving to the city in 1999. Hull originally came on board the sports staff of the Citizen in 2007, retired in 2019, but returned as the Citizen's sports editor in 2021.

Who will win the Delta League in baseball?