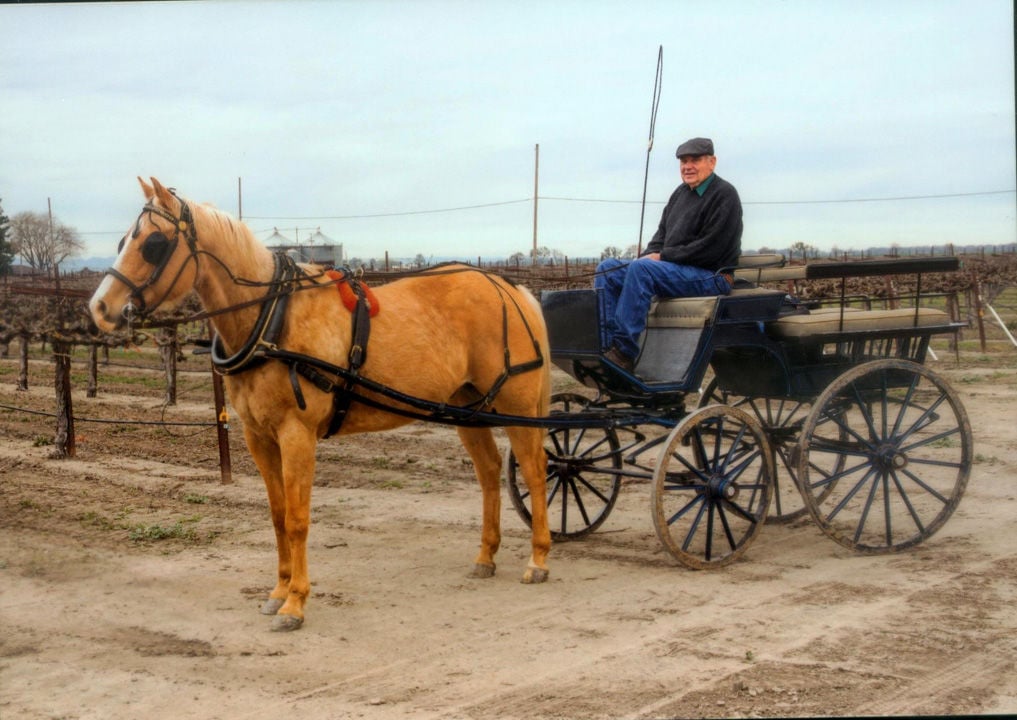 Joe Daehling is shown on a horse-drawn carriage alongside his vineyard on his Grant Line Road ranch. 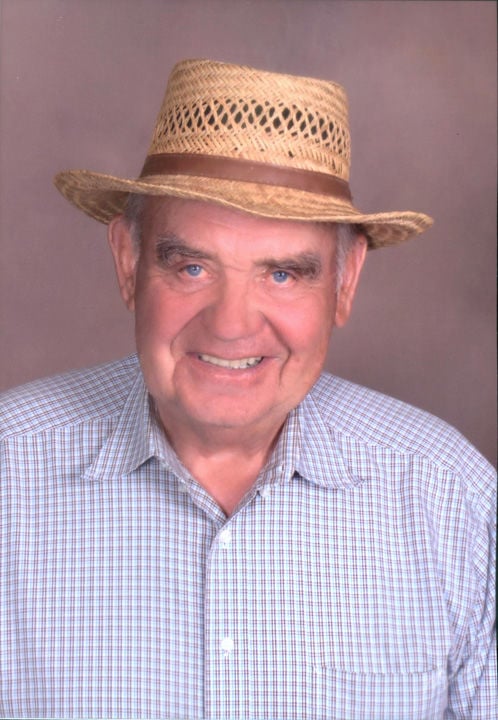 Joe Daehling is shown on a horse-drawn carriage alongside his vineyard on his Grant Line Road ranch.

A celebration of the life of longtime Elk Grove rancher Joachim “Joe” Daehling will be held on Friday, Jan. 17.

Those who knew Daehling recognized him as a lover of horses, a rancher, a hard worker, and a kind-hearted man who took an interest in others.

Daehling was also hard to miss in a crowd, considering that he stood 6 feet, 4 inches tall, and he often wore a Western hat that made him appear even taller. He was also well-recognized for his accent that came from spending the earliest years of his life in his native country of Germany.

His wife, the former June Neuharth, who he married on Sept. 5, 1964, described Daehling’s life as an adventurous success story.

“He came over (from Germany) with a suitcase and not much and he ends up with a 400-acre ranch (on Grant Line Road) and grapes and thoroughbred horses running around here that other people own, and a nursery,” she said.

Daehling, who was born on July 30, 1937, began his life with his parents, Otto and Hildegard, and his brother, Juergen, in Koblenz, a German city located on both banks of the Rhine.

“He grew up in World War II in a city that was 80% destroyed by bombs,” she said. “So, they lived in a cellar and had to evacuate with his mother to a forest, and they slept in a barn. It was a terrible existence, and his father was in a concentration camp in Russia. He was an engineer in the German army and got captured. So, he was away for eight years.”

Daehling eventually graduated from agricultural school, spent a year living in Sweden as an exchange student on a large dairy, and served in the German Army.

June mentioned that Daehling came to the United States through a sponsorship of her grandmother who offered him an opportunity to “see how agriculture was done in America.”

He spent time working on two farms in South Dakota before coming to California and working on a farm in Clarksburg for about a year.

Daehling volunteered to join the U.S. Army, serving for three years. He worked for the Army in the field of transportation mechanics, with his goal of using those skills to later fix tractors.

After boot camp, Daehling served in Frankfurt, 80 miles from his former home.

He later returned to California, and was hired to work for Frank Cate’s Elk Grove Ford dealership as a mechanic, working there from the mid-1960s to 1973.

While working for Cate, Daehling also assisted on the Florin area ranch of his father-in-law, Emil Neuharth.

June added that Daehling rented various Elk Grove area land for cattle-raising prior to purchasing his family’s current ranch in 1973, with his father-in-law. Daehling raised cattle until 1982.

In addition to raising cattle on the property, Daehling grew corn, corn silage, alfalfa, clover seed, and tomatoes. He would later have a vineyard planted on a section of his land.

With his farming background, Daehling had a longtime love of horses. That love led to him owning many horses, some of which competed in races and had notable victories.

Daehling was a promoter of California-bred horses, drove and collected antique carriages and was a longtime member and past president of the Antique Carriage Club of Northern California.

He also rode Palominos with The Sacramento Sheriff’s Posse, and rode in the Rose Parade in Pasadena, and in an inauguration parade for President George W. Bush in Washington, D.C.

As a lover of horses, which included a deep interest in thoroughbreds, Daehling owned about 70 horses at the time of his death, and there were about 130 more horses on the property that were owned by other people.

His other activities included obtaining his real estate license and working for Ray Steele at Elk Grove’s Steele Realty for 30 years, and serving on the board of the Sacramento County Farm Bureau.

Among Daehling’s best friends was the Dale Mahon family. In addition to being neighbors and friends, the Daehlings and the Mahons have a four decadelong tradition of holding carriage rides every October.

Dale mentioned that both he and Daehling were antique carriage collectors who shared the same dream: to open a carriage museum in Elk Grove.

“(The museum) would display the antique carriages of the community, plus those that we have collected around,” he said. “I probably have close to 20 (carriages), and Joe has a number of them of at least a half a dozen or more, and there are many others in the area that have antique carriages. It was just in the back of our minds of something we would like to see happen in Elk Grove to preserve the history.”

Among the carriages that Daehling acquired was a carriage that appeared in the 1969 film, “Hello, Dolly!”

Dale’s wife, Pat, described Daehling as a man who was kind, generous, funny and hard working. And she added that despite his busy lifestyle, Daehling “always had time for friends.”

“The last time I saw him was a cherished memory, because he had his grandson, Jackson, and granddaughter, Julian, in a carriage with him, and he came over to show us as he often did,” she said. “But Jackson was driving the horse, and that was giving (Daehling) so much pride to know that his love of horses and carriages was being carried on.

“So, the smile on his face and on his grandchildren’s faces was just a great memory for me. It was a great pleasure having him (visit the Mahon ranch), and I still leave the front porch light on thinking he’s going to stop by. We’re going to miss him dearly.”

Also remembering Daehling was Howard Sihner, who moved to the Elk Grove area in 1971 and was also a member of the Antique Carriage Club of Northern California.

“(In the 1970s), my kids were in 4-H and I bought hay from him,” he said. “He was just a great guy. The guy always had a smile, always had something good to say about somebody. He was just a very pleasant fellow.

“Everybody involved with agriculture in this area or that had anything to do with Joe are going to miss him.”

June told the Citizen that the Daehlings’ ranch will continues to operate as it did prior to Daehling’s death.

The Daehling family asked that those interested in contributing flowers for Daehling’s service instead make a monetary contribution to either the Elk Grove Historical Society or the Strauss Festival of Elk Grove.