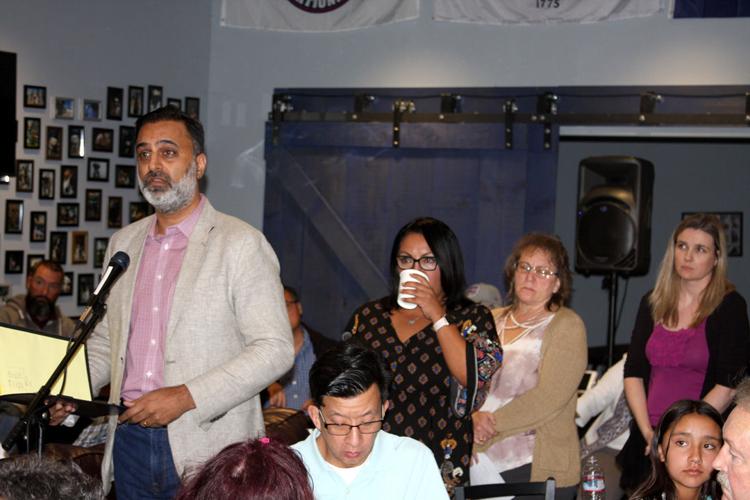 Local activist and civil rights attorney Amar Shergill stands at a microphone as he listens to Council Member Darren Suen respond to his question. 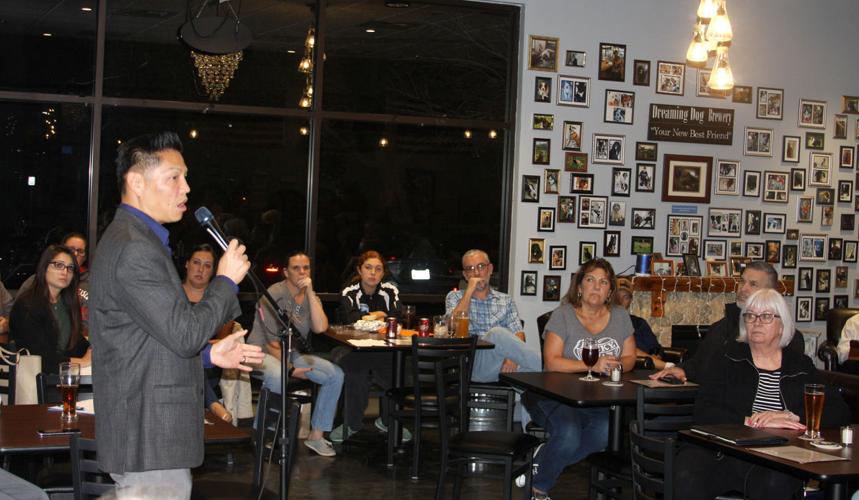 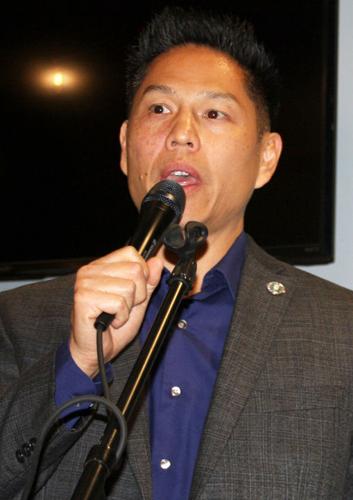 Local activist and civil rights attorney Amar Shergill stands at a microphone as he listens to Council Member Darren Suen respond to his question.

This university’s administration hopes to build a $900 million, 12-story hospital in the Stonelake neighborhood, adjacent to its current campus. However, the property must also be rezoned, and the project must also be approved by the city.

The meeting, which was attended by about 50 Elk Grove residents, was held at Dreaming Dog Brewery in the Stonelake Landing shopping center. The brewery lies within the potential hospital site and that business’s owners believe they could be forced to move if the hospital is approved.

Although the meeting was advertised as an open forum for the community to ask questions regarding any local topic, nearly the entire meeting was dedicated to the issue of the proposed hospital.

CNU’s hospital proposal has drawn both support and criticism from Elk Grove residents.

To show their opposition to the location of the proposed hospital, Stonelake neighborhood residents and others formed a community group, which is known as Neighbors Ensuring Sincere Transparency (NEST).

Some Stonelake Landing business owners have also expressed concerns about losing their places of business.

Suen, whose district includes the Stonelake neighborhood, stressed early in his speech that he is not in full support of the proposed hospital.

“There’s only one person on the council that’s been unabashed on the full support (of this proposal), and it’s not me,” he said. “So, I just want everybody to know that. I’ve been supportive of jobs, I’ve supported health care and concepts, but I’ve also been very clear that there’s a lot of details to work out and there’s a lot of concerns that I have.”

Suen participated in a 2018 press conference where the university administration announced the proposal, which led many people to believe that he fully backed the project.

The press conference, which was held at CNU’s Elk Grove campus, also promoted the university’s intention to gain necessary approvals and build the facility by 2022.

“I can’t turn back time, OK?” Suen said regarding his participation in the press conference. “You know, that’s something I wouldn’t choose to do (in retrospect). You know from that press conference, everybody was there – the police (and many others).

“Everybody was excited, because of what the possibility was, what it could mean, and that could still be the case. I don’t know.”

Suen also said that he has distanced himself from the university since that time, but continues to keep an open mind about the project.

Suen noted that he has concerns for CNU’s methods of communication with the public and Stonelake Landing business owners.

“As a council member, we love all our businesses, so I don’t like seeing one sacrificed for another without fair treatment.”

However, Suen noted that the city does not legally become involved in landlord-tenant relationships.

Among those who shared their frustrations with the project were Liz Brown, co-owner of Dreaming Dog Brewery, and Matt Weaver, co-owner of Results Transformation Center in Stonelake Landing.

Brown claimed that she had been lied to by CNU CEO and President Alvin Cheung.

“Right after this building was sold (to CNU), Alvin Cheung came over here and sat in our bar, ordered a beer, and I said, ‘What do you want to do with this place?’

“And he said, ‘We want to use some of the empty suites (in the shopping center) for clinics for our students, and then we want to be your marketing partner. This is going to be the most successful shopping center ever.’ From day one, he was lying to us.”

Weaver also alleged that CNU has lied to him and has shown a “lack of integrity.”

He told the Citizen that he believes that both the City Council and CNU have liabilities in the matter.

“When (the council) told the world (at the press conference) they’re excited to displace small businesses, they took on a great deal of liability as a city council,” Weaver said. “CNU took on a great deal of liability by publicly proclaiming that they’re going to push these businesses out of here, and then they’re demonstrating in good faith that they’re trying to run small businesses out of Stonelake (Landing).”

CNU representative Brian Holloway mentioned that the shopping center tenants signed a lease with the previous owner that notes that the landlord can at any time, for any reason move a business to another location.

Holloway added that CNU has been working with tenants in the shopping center.

“Our focus over the last few months has really been working with the retail tenants and we’ve made some progress there,” he said.

Holloway noted that work has been done toward relocating some tenants to other areas of the center, while other tenants had their leases purchased and “are going away with money.”

Suen stressed that the city does not own the shopping center property.

“Folks have to remember, we don’t own this land,” he said. “(CNU is) not optioning the land. They own the land. If they had no application today, they could kick you (business owners) out, which is very challenging for us as a city. We can’t dictate what people do on property they own.”

Local activist and civil rights attorney Amar Shergill asked Suen if he had received campaign funding from the university during his unsuccessful campaign to unseat Mayor Steve Ly in last year’s election.

Although Suen said that he had taken some money, he also challenged Shergill.

“I know you’re aligned with the mayor, Amar,” he said. “You proclaim that you are here because of the community.

“I received a little bit of money, relative to what (the university) gave to the mayor, and again, that was to run against the mayor.”

As for the project’s timeline, Behrmann said there are no designated dates for the proposal to be reviewed and considered by the Planning Commission and City Council.

“We don’t have specific deadlines or dates of when this is going to come to the Planning Commission or the City Council, but that’s the end of the road,” he said. “The City Council makes the final decision on whether this goes through, and all of those pieces of it all come together at the end.”

Behrmann added that the property could not be rezoned prior to these approvals or denials.

“The zoning is not going to get approved in advance of the project,” he said. “So, the zoning comes with the project. It all gets considered at the same time, because in order to rezone, you need to do an analysis on that, as well. So, it’s all packaged together.”

Petition against hospital in Stonelake

NEST is currently gathering signatures on its “Petition to Stop CNU Hospital.”

The petition urges the city to “deny the land use, zoning changes and conditional use permits sought by CNU” for their desired hospital project.

NEST member Staci Anderson said that the group will later present the petition to the City Council.

“Ultimately, we are trying to get enough people to sign the petition, which is against the whole CNU project proposal for various reasons, including floodplain issues, destroying small businesses and whatnot,” she said.

“We’re going to bring (the petition) to the City Council. We’re going to show Councilman Suen basically what a good majority of his constituents want, and we hope that with that information, he’ll do the right thing.”