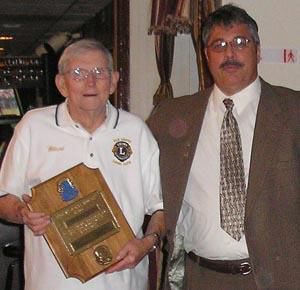 It was a full evening for Elk Grove Lions on June 22 as they installed officers for the 2009-10 year, inducted a new member, and handed out numerous awards to about two dozen members, following dinner at Vince’s Ristorante in Elk Grove.

Danny DiBenedetto III is the new president, and one of the youngest to hold the office, according to proud grandfather and former president Dan DiBenedetto. He takes over from 2008-09 president Jim Switzgable.

Lifetime Member award went to Jim Parino and new president DiBenedetto, and Lion of the Year was shared by Bill Heston and Dan Pearson.

A new award, the Paul Betschart Iron Lion was given to longtime member John Zehnder. Betschart, who was a charter member of the club who held a record for perfect attendance, died earlier this year.

Don Ring, Past District Governor and member of the Orangevale Lions installed the new officers pointing out that Lions International is the largest service organization in the world.

Ring’s wife, Carol Ring, who is also a Past District Governor and a member of Folsom Lake Lions, inducted new member Howard MacDonald.

The Elk Grove Lions Club is the oldest service organization in Elk Grove, and during the past year provided more than 3,000 hours of service to the Elk Grove community, along with donating more than $150,000 in support of local organizations.

Some of these organizations include the Senior Center of Elk Grove, FFA, Jessie Baker School games, Elk Grove Police and Sacramento County Sheriff’s departments, Toys for Troops, Strauss Festival, American Cancer Society’s Relay for Life, CSD’s Camp in the Park and Creek Cleanup, Boy Scouts, and a variety of support for graduating seniors at Elk Grove and Pleasant Grove high schools along with elementary and junior high students.