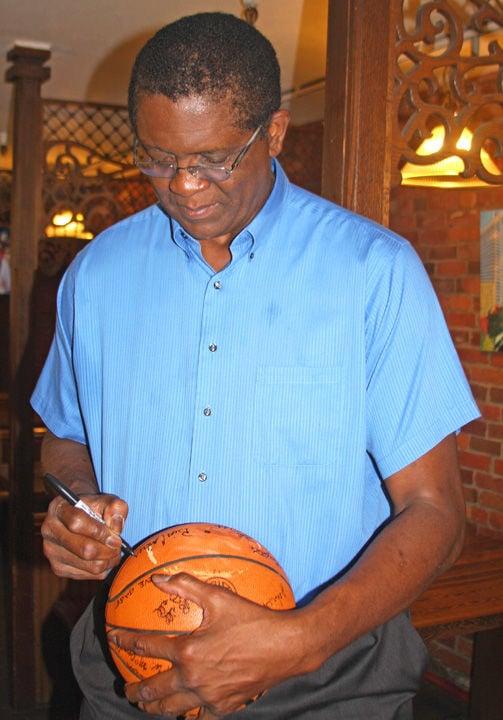 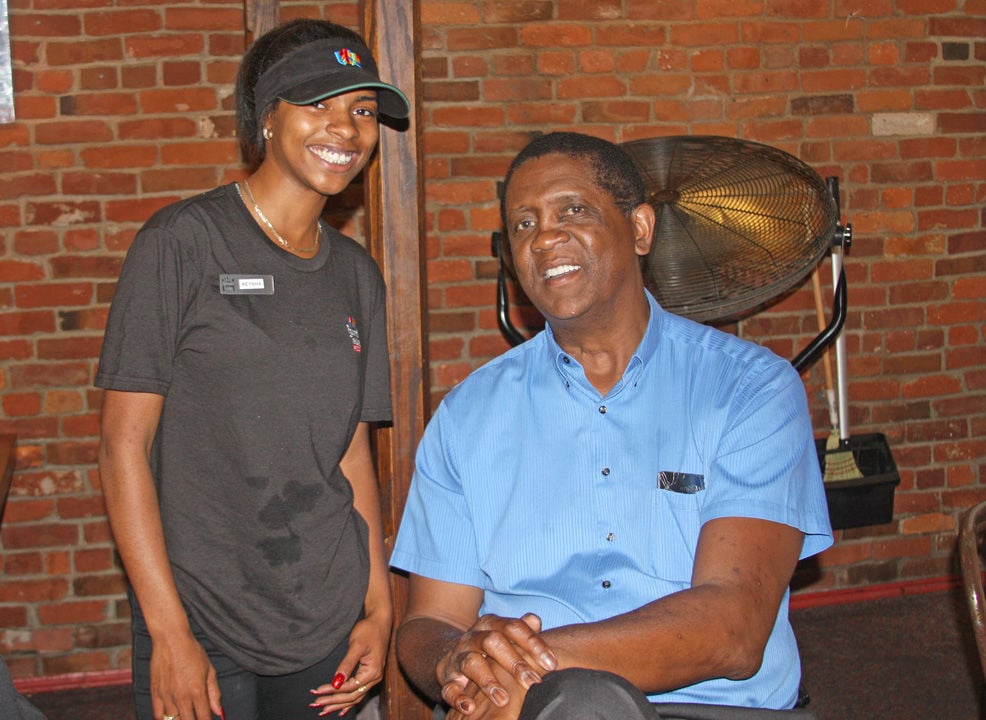 Round Table Pizza employee Ikeysha Smith, who graduated from Elk Grove High School in 2018, poses with Bill Cartwright at the event. Smith, who played on the girls’ basketball team at the school, said she was honored to meet Cartwright. 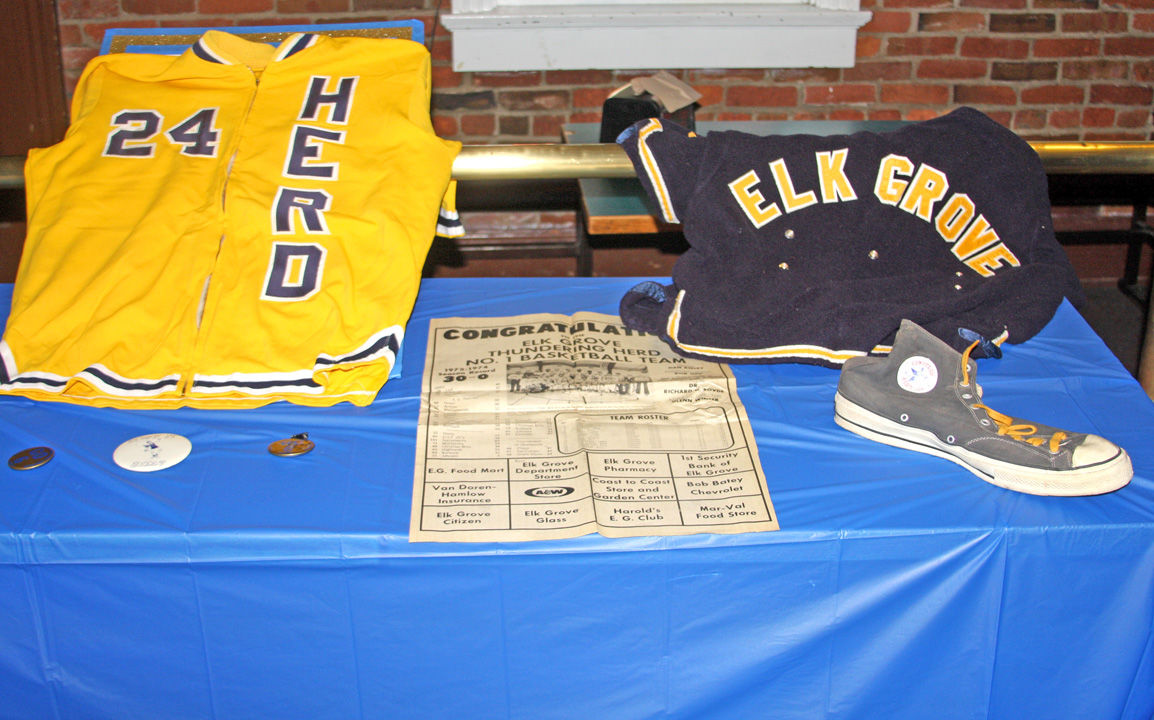 Elk Grove High School basketball memorabilia from the 1970s is on display at the event. Included among these items is Bill Cartwright’s yellow jersey and his black, canvas Converse high-top shoe. 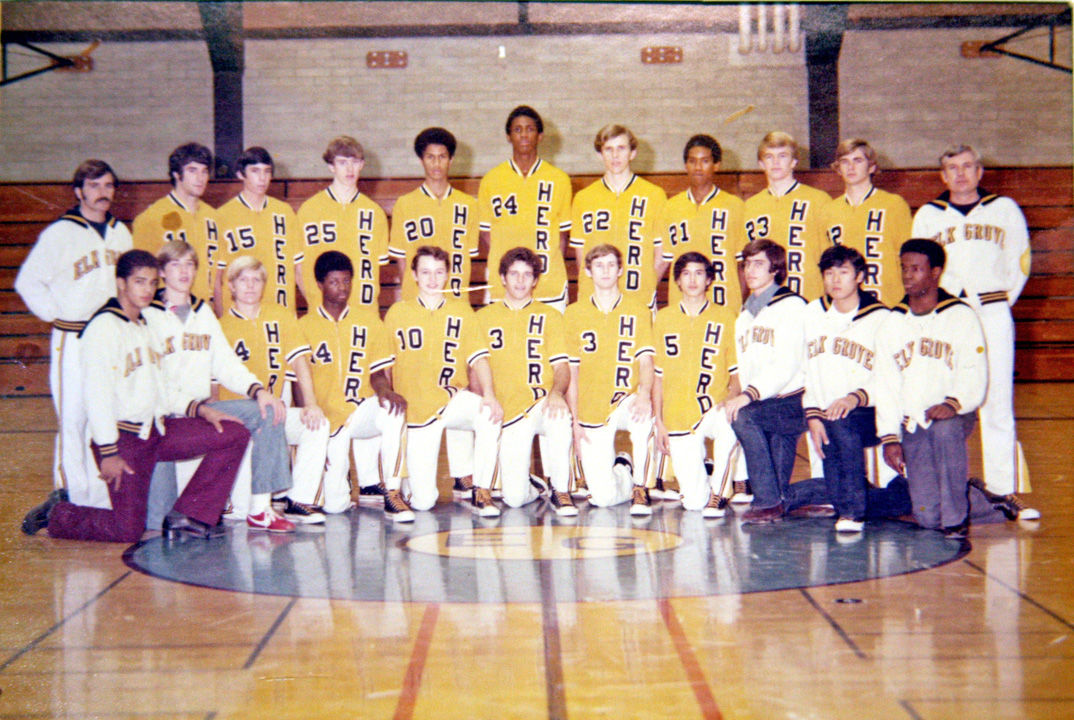 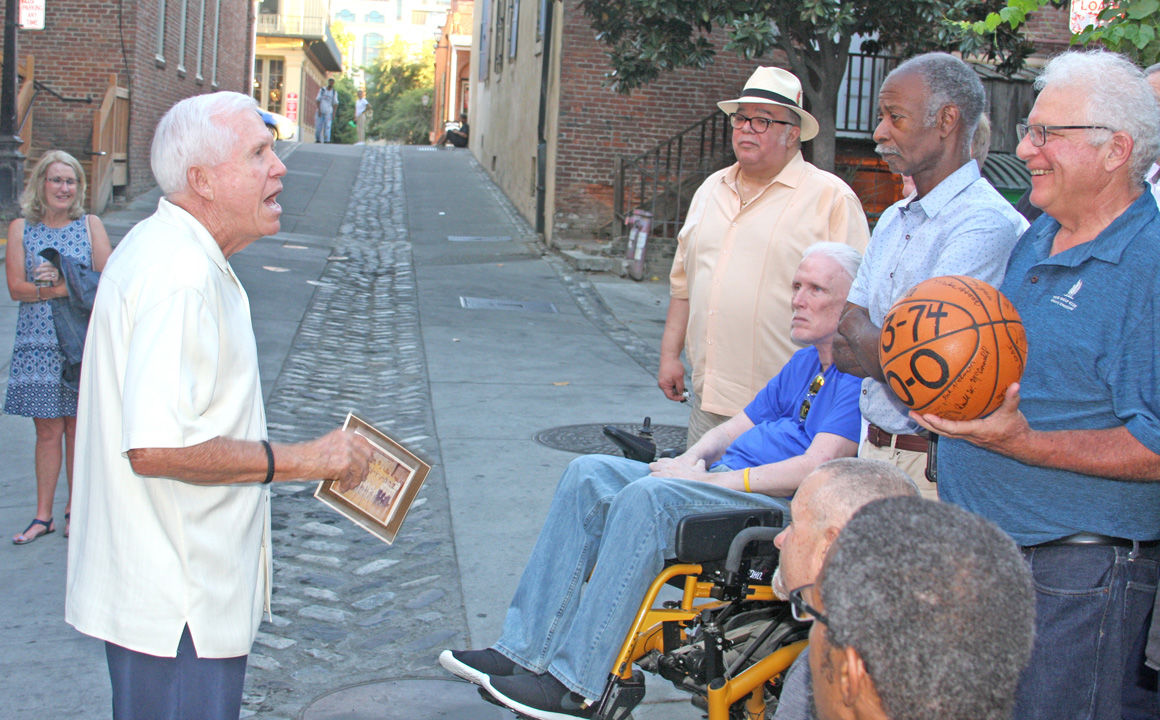 Dan Risley tells his former players that the 1973-74 undefeated team was the best Elk Grove High School basketball team that he coached.

Round Table Pizza employee Ikeysha Smith, who graduated from Elk Grove High School in 2018, poses with Bill Cartwright at the event. Smith, who played on the girls’ basketball team at the school, said she was honored to meet Cartwright.

Elk Grove High School basketball memorabilia from the 1970s is on display at the event. Included among these items is Bill Cartwright’s yellow jersey and his black, canvas Converse high-top shoe.

Dan Risley tells his former players that the 1973-74 undefeated team was the best Elk Grove High School basketball team that he coached.

It felt like the winter of 1974 again when the former Thundering Herd players gathered and reminisced about good times during their 45th anniversary celebration at Round Table Pizza in Old Sacramento.

Cartwright joined teammates Terry Saufferer, Mike Pinkerton, and Bill Bell as well as their Coach Dan Risley. Spouses, friends, and even a former Herd cheerleader dined with them.

For Bell, who organized the reunion, the event served as a way to both celebrate the team, as well as mingle with some of his close friends of the past.

After a failed attempt to gather teammates and others for a 40th anniversary of the team in 2014, Bell was determined to hold a team reunion in connection with last weekend’s Elk Grove High Class of 1974 reunion.

“I thought, it’s now or never in a way,” he said. “So, I started making a couple of phone calls to people and I said, ‘Do you know where whomever is?’

“I realized it wasn’t going to be that hard (to organize the reunion) as soon as I got Billy (Cartwright) to say yes. So, I started dropping his name to the other guys. ‘Billy’s going to be there.’”

Although Bell lives in Bloomfield Hills, just outside of Detroit, he noted that most people associated with the team still live in Northern California.

Risley, who lives in Palm Desert, was among the most energetic participants of the reunion.

Still the constant motivator after all these years, Risley encouraged others to speak to the Citizen about their personal and team successes on the court.

While directing his attention to Cartwright, he mentioned that he is one of the nicest and humblest people he ever met. That comment is especially complimentary, considering that Cartwright also won three consecutive NBA championships with the Chicago Bulls in the 1990s, and later spent nearly two decades as a professional basketball coach, mainly in the NBA. As an assistant coach with the Bulls, Cartwright won two more championships in 1997 and 1998.

Cartwright, a 1975 Elk Grove High graduate who scored about 2,500 points during his prep career, chose to speak about his team, rather than his own accomplishments as a player.

“We had a really special team, special coaches who put a ton of time in with us,” he said. “My junior year, we were undefeated. I don’t think there’s been any other (local high school basketball) team to do that, not only in Elk Grove, but any place else in Sacramento.”

“I came from Mira Loma High School and Elk Grove played league games in the Mira Loma gym, and I saw these big guys, but they were fundamentally unsound,” he said. “But I’m a hard worker and I like to motivate, and we got it going and all of a sudden all these guys came (together) and it was a dream come true.”

In his first experience as Elk Grove’s coach in the 1970-71 season, Risley led his team to an 11-9 record and a third place finish in the Metropolitan League. The team won nine of its last 11 games that season.

Risley’s team improved to 16-8, including a 10-2 record for first place in the Metro League in the following season.

Leading up to the perfect season of 1973-74, the Herd finished the previous season with a record of 23-4 and a 10-2 first place finish in the Metro League. Such players as Cartwright, Saufferer, Pinkerton, Mel Jessee, Kyle Bartels and Mike Solis led that team.

During Cartwright’s junior year, when the team finished with a perfect record, he was injured for about 10 games and Bartels missed the majority of the season with a knee injury.

Nonetheless, as a team that had a solid roster, was very close, fundamentally focused and well coached, the Herd found various ways to win every game of the 1973-74 season.

In the championship game of the third annual Tournament of Champions (TOC), the Herd preserved its perfect mark by beating Grace Davis High, 66-54. Cartwright scored 44 of the Herd’s points in that game.

That win concluded the team’s season, since there were no playoffs beyond that section tournament.

However, Elk Grove’s 30-0 record put them in a very select class in California, as only three other teams in the state finished that season undefeated.

Furthermore, the California Interscholastic Federation recognized Elk Grove High as the state’s number one team in 1974 and 1975.

During Cartwright’s senior year, the 1974-75 team – although not undefeated – continued its success. The Thundering Herd won the 1975 Northern California TOC title.

Cartwright was the Cal-Hi Sports Athlete of the Year and was named as a first team All-American by Parade magazine. Additionally, Risley was named Coach of the Year.

In 33 games that season, the Herd played before a total of more than 85,000 spectators.

Risley told his team that the undefeated team was his best team, and that the Herd’s perfect season laid the groundwork for the complete California championship.

Bell mentioned that it is tough to decide what team was better, especially since he never saw the 1974-75 team play.

Saufferer, a 1974 graduate who was one of the undefeated team’s star players and Cartwright’s best friend, recalled the work that the team underwent to help them become more successful.

Dave Van Cleave told the Citizen that the Cartwright-led team was so talented that even as a 6-foot-5-inch forward, he barely made the team.

“I was actually the last guy on the team,” he said. “I was chosen as our practice player, and for the majority of the year I was without a uniform. A couple guys got hurt at the end of the year and I ended up getting a uniform and I was able to take part in a few of the games.”

Van Cleave was one of seven players on the Herd’s undefeated team who stood 6 feet 4 inches tall or taller.

Bill Thompson, who was a manager for the team, said that the team’s success was partially due to their drive to “bond together through thick and thin.”

“It’s a great group of guys,” he said. “They love each other now, they loved each other back then. This is where I learned about family. This is a team and a family. It’s cool.”

Wendy (Haight) Scribner, who currently lives in Garden Valley, Idaho, recalled watching many exciting Herd basketball games as a cheerleader for the team.

“(The team) was so dominant,” she said. “It was just fun, because there was so much electricity in the air when you were at one of the games, and also the community supported them so well.”

Among the other people attending the reunion was Matthew Manley, who said that he was a big fan of the team during its undefeated season.

“There was such a wildfire (surrounding the team) throughout the city that we would go all the way from where I lived out in the Foothill Farms area to Elk Grove to watch games, and then to the TOC,” he said. “It was just an incredible, once in a lifetime (experience). It was unbelievable.”