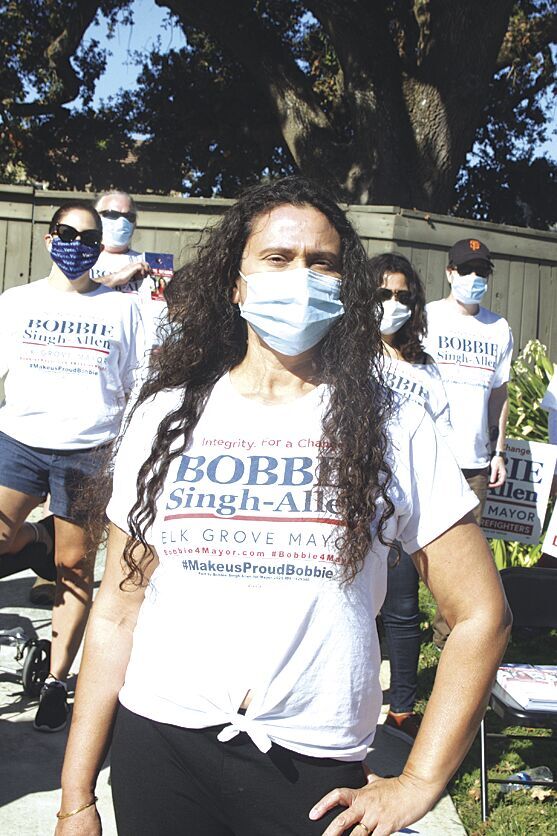 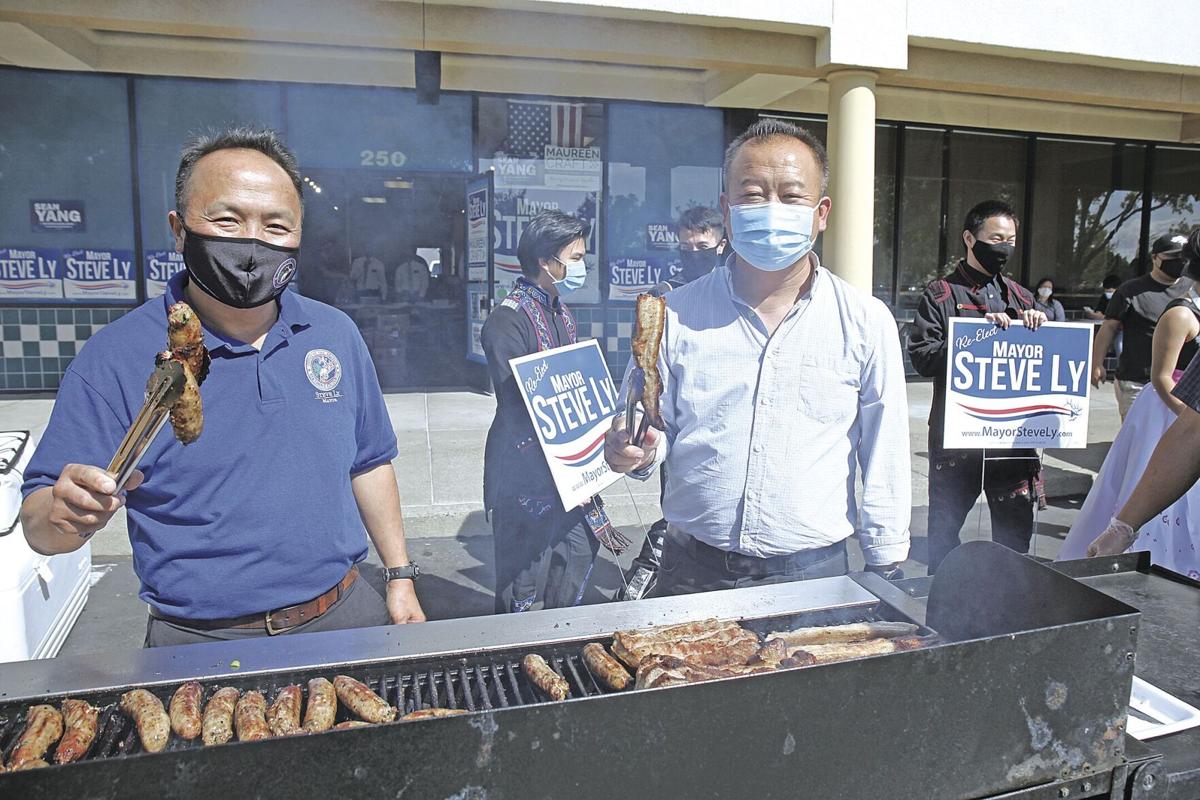 Ballots were mailed to voters across Sacramento County last week, and two Elk Grove mayoral candidates kicked off the home stretch of their campaigns. Incumbent Steve Ly and his opponent Bobbie Singh-Allen held get-out-the-vote events last weekend. The mayor also had volunteers prepare campaign flyers and a Hmong fashion show was held at his campaign headquarters.

Also vying for the same seat is Brian Pastor, a first-time political candidate and a 15-year resident of Elk Grove.

The first of last weekend’s mayoral candidate events was Ly’s fundraiser, which was held on Oct. 10 at his campaign office.

Ly, who is seeking his third term as the city’s mayor, became America’s first Hmong mayor in 2016.

During this year’s campaign, Ly was accused by Singh-Allen and several other local women of using the Hmong patriarchal system to harass them. Ly has denied those claims.

The mayor told the Citizen at his event that he prefers to focus on local issues.

“At least for my campaign, I’m honing in specifically on the issues that are of concern to Elk Grovians, particularly getting businesses open, flattening the curve, getting students back to school,” he said. “These are things that we really should be focusing on, as opposed to anything else. Mudslinging, name-calling, I think that’s beneath Elk Grove.”

Ly referred to the reopening of businesses and returning students to their schools as “Elk Grove’s biggest issue.”

He additionally called the COVID-19 pandemic the “elephant in the room.”

“It’s real; people are getting sick, people are dying from this (virus),” he said. “What we have to keep our eye on is how do we address the pandemic? How do we recover economically and keep businesses functioning?”

Among the other issues that Ly mentioned as important to him are increasing jobs, reducing traffic congestion, and improving public safety.

The mayor noted that with his desire to focus on local issues, he challenges any of the other candidates to a debate.

Ly also said that he is proud of his service as mayor.

“Of the candidates on the ballot for mayor, I have the most experience,” he said. “This will be my third term. I have results. I’m not going to engage in name-calling my opponent for the sake of name calling, but I’m going to talk about the 6,600 jobs that have come to Elk Grove or has been retained as a result of my leadership in Elk Grove.”

He added that under his tenure, the city opened a new community center, veterans’ hall, senior center, aquatics center and animal shelter, broke ground on a nature preserve, and is working on the construction of the Old Town Plaza.

“Steve is our endorsed candidate, because we have seen his record of fighting for values that we believe are important in our Elk Grove community,” he said.

Sean Yang, an Elk Grove Unified School District board candidate, referred to Ly as a “mayor that listens to the people of Elk Grove and served the people based on the people’s needs.”

Both Ly and Singh-Allen’s events were theme-oriented fundraisers.

The mayor told the Citizen that he desired to celebrate the city’s diversity through his event.

“I really wanted to take the opportunity to celebrate our diversity in Elk Grove,” he said. “Wherever your ancestors are from, come to the campaign office, address it and be proud of it.”

Singh-Allen’s campaign event on Oct. 11 focused on rallying labor, firefighters, and local, regional and community leaders and volunteers to “get out the vote.”

She told the Citizen that economic recovery is one of the city’s most important issues.

“I have real plans to address our economic recovery,” Singh-Allen said. “And that’s where I’m really proud to have our business support, because they believe not only in my leadership, but also in my plans.”

She identified her plan as including presenting a “strong voice” for struggling businesses and directing them to succeed.

Singh-Allen said that she has already been working with small businesses through securing personal protection equipment (PPE).

“I have been distributing (PPE) throughout our city to our small businesses who could have used it,” she said.

Singh-Allen mentioned that she brings critical relationships for “rebuilding Elk Grove and helping jump-start our economy.”

“Those relationships are not only our local leaders – the entire City Council – but our local, regional and state leaders,” she said. “You need to have these relationships to be able to help move our city forward.”

“Steve Ly has proposed the saying, ‘Traffic congestion solutions,’ for four years,” she said. “Clearly, they’re not working. I have real solutions, and part of those solutions is to bring light rail to our (Cosumnes River College) campus, which is instrumental to connect us back to the region.”

Singh-Allen also expressed her desire to have free, public transportation for K-12 students in Elk Grove.

During her run for mayor, she gained endorsements from the Elk Grove Police Officers Association, the Sacramento Area Firefighters Local 522, and the Elk Grove Chamber of Commerce’s Political Action Committee.

“I am proud that I have very, very strong support from both business and labor,” she said. “It’s going to take both sides to come and work together to find the best solutions for our great city.

“I have worked for eight years in the fifth largest school district. So, it is twice the size of the city of Elk Grove.”

Her experience also includes serving on the boards of the Elk Grove Food Bank and Elk Grove Teen Center USA.

Singh-Allen noted that her rally was a preliminary event before her volunteers “responsibly” distributed campaign door hangers throughout the city. Those volunteers ranged from 11 to 70 years old.

Among those who attended Singh-Allen’s event was Matt Andrakowicz, a trustee with Teamsters Joint Council 7. He shared why that organization supports Singh-Allen for mayor.

“We’re really encouraged with Bobbie’s support of labor, her support of the project labor agreements and we’re excited to start working with her in Elk Grove,” he said.

Chris Schamber, of Sacramento Area Firefighters, Local 522, added that this organization believes that Singh-Allen has a “very good vision for the city” and a “proven ability to bring groups together and give everyone a voice.”

Singh-Allen joined Elk Grove’s mayoral race in July after becoming one of several local women who alleged they were harassed by Ly’s associates or supporters, and possibly patriarchal forces within the Hmong familial clan system. Those women include other locally elected leaders.

Singh-Allen claimed that she was harassed by Ly’s associates after she was appointed to the Elk Grove school board in 2012.

Singh-Allen mentioned that she believes that alleged action occurred because she endorsed Ly’s school board opponent, Jake Rambo. Ly defeated the incumbent Rambo in that year’s election.

In response to the harassment allegations made against Ly by various local women, the council requested last August that the Sacramento County Grand Jury launch an investigation into those claims.

Ly has denied his involvement in this alleged harassment and issued a statement regarding those claims last August.

“They have spoken out about being harassed, intimidated and bullied,” he wrote. “I believe them and acknowledge their pain. I am deeply sorry for the pain and suffering they have endured.”

Singh-Allen in July used her personal Facebook page to refer to the Hmong familial clan system as a “controlling and intimidating system used to attack and silence these women.”

Her comments about the Hmong culture led to organized protests against her, and an online petition calling for her resignation from the school board.

Singh-Allen announced last month that she received a death threat from a stranger through her personal Facebook page.

Two weeks later, all three mayoral candidates participated in a candidate forum, which was disrupted by a few dozen protesters who accused Singh-Allen of making derogatory and bigoted remarks about Hmong culture – a claim that she has denied.

As an outsider to the accusations involving Ly and Singh-Allen, Pastor last month told the Citizen that he was not taking sides on the matter.