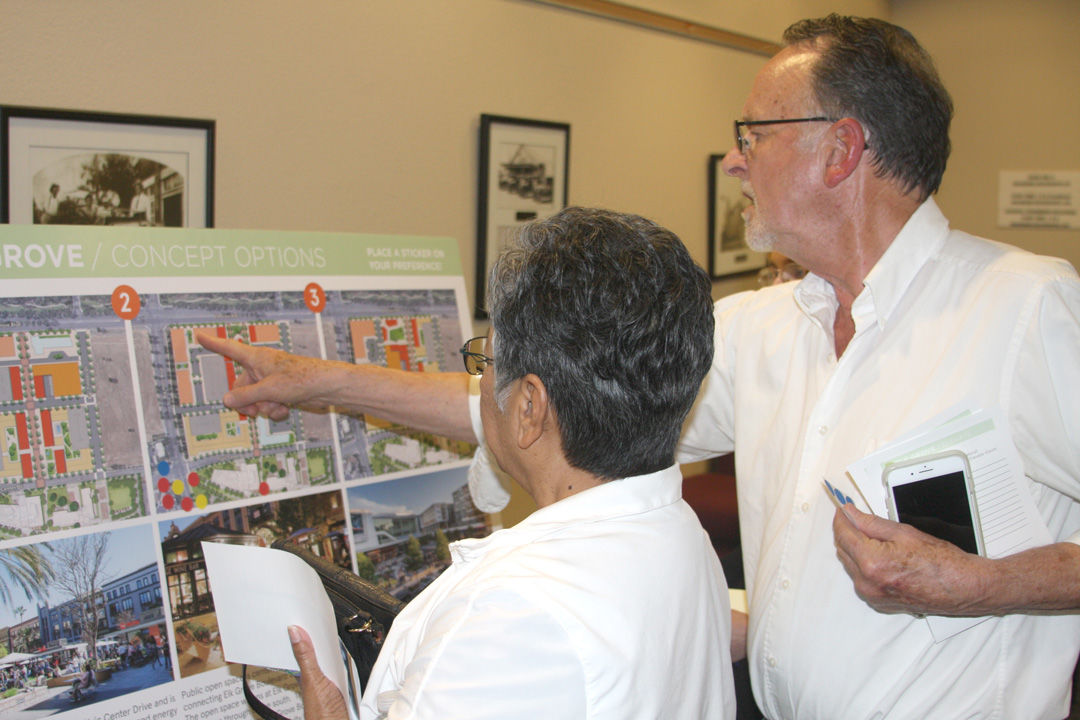 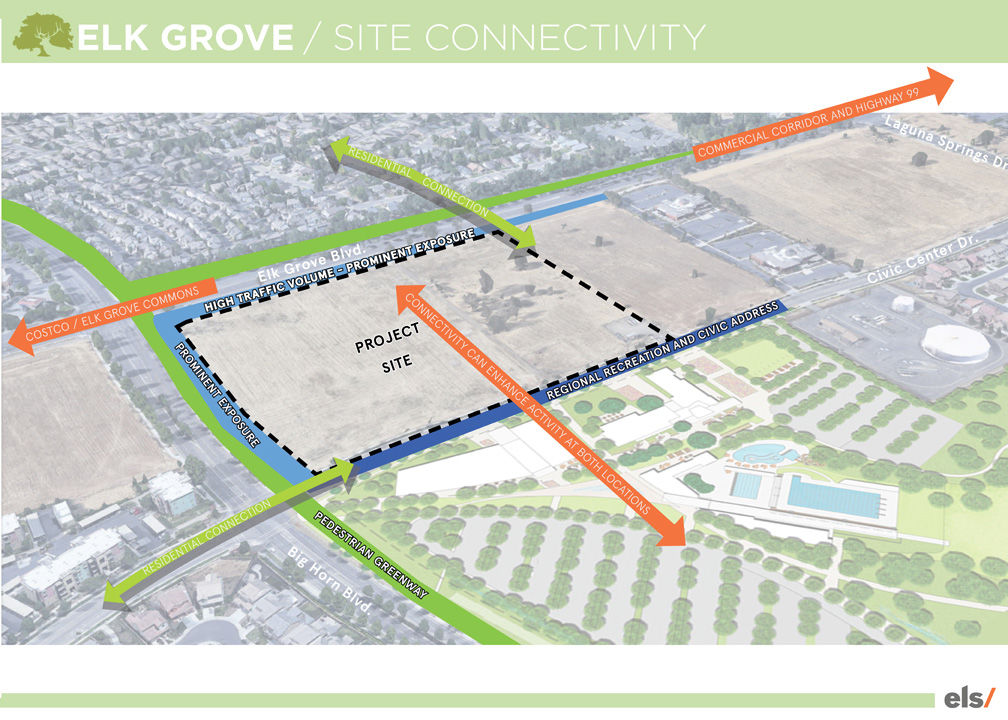 The project site is shown in relation to District56, lower right.

The project site is shown in relation to District56, lower right.

The Elk Grove city staff is in the planning stages of a potential, multi-use development on a 20-acre property north of District56 – formerly known as the civic center.

This development, planned for the corner of Elk Grove and Big Horn boulevards, may include retail, dining, entertainment, and office and residential space, as well as a hotel.

During an Oct. 1 public meeting to present concept plans and gather community input, Darrell Doan, the city’s economic development director, described the project as a unique opportunity for Elk Grove.

“(The project) would give our residents a new type of neighborhood to patronize, with great bars and restaurants and movies and great shopping and fantastic public spaces that you see in other suburban environments that we simply lack,” he said.

“And then also, we think it will act as a regional attractor, because we know that a lot of our residents leave the city to shop at these kinds of shops. So, it just makes sense to put them here and keep our residents in town, spending their money here.”

Doan also referred to the project as an important economic-development tool.

“We want to attract companies that employ our residents, but increasingly those companies are looking for these kinds of environments.”

As for the residential component of the project, Doan believes that many people would be attracted to live in such a place.

“I think a lot of people would like to live in this kind of environment – leave your apartment in the morning, go downstairs, have a cup of coffee at a great, local coffee place, and go to work around the corner. A true live-work environment.”

The project would also allow people to spend more time out of their cars, Doan noted.

“You need that density and that critical mass of activity to make it a site that becomes more convenient to park and walk, or just take your bike there and walk there, than it is to bring a car in,” he said.

Christopher Jordan, the city’s director of strategic planning and innovation, told the Citizen that the city is seeking ideas on the type of development, retail experience, housing and employment that would occupy the property.

Jordan added that the approach is to create a place that builds off District56, which features various public amenities, including a community center, a veterans hall, a senior center, a public library, and a children’s museum. The project’s aquatics center opened in May.

“This needs to be a plan that is rooted in the Elk Grove character, and everything we’re starting to build off of here is to do that,” he said. “And we’re looking at other projects, as well, for inspiration. We talked about a project from Georgia that’s in a suburban community outside of Atlanta that is similar in a lot of respects to Elk Grove. We’re looking at places in suburban Virginia (and) suburban sites in Texas.”

Also being studied for ideas in the Sacramento region is the Fountains shopping center in Roseville.

During the meeting, three different concept plans for the site were presented for public review.

Like the majority of the attendees who spoke to the Citizen following the meeting, east Elk Grove resident Sean Witt is excited about the project and prefers Concept No. 2, which features a central gathering space.

“It’s more city, but urban,” he said. “It looks like it would be pretty fun. Hopefully, it doesn’t turn out to be like Laguna West and that master plan. (It was a) disaster.”

Margaret Nispel, a nine-year resident of Elk Grove, said that she understands the importance of choosing a good concept plan.

“I’m a real estate broker,” she said. “I’ve been involved developing areas in other parts of the state, and I’m interested in the future of Elk Grove. That’s why I came to the meeting to find out what the city is planning for itself.”

Nispel added that she is concerned with the traffic congestion that would be generated from the project.

“My concern is the influx of traffic in our community, and how it’s being handled,” she said. “It’s not being handled very well in my opinion – and the road access for all the future cars that are going to come with all this new development.”

“If they put this kind of development in, aren’t other people who live in the surrounding areas wanting to come here, too?” she said. “Don’t come in a car. Come in light rail.”

There is currently no specific plan for an extension of light rail service into Elk Grove.

Another attendee, Joyce Byers, said she hopes that the project gets built soon.

“I like their concept,” she said. “I just hope it happens quickly.”

Byers added that she worries about a worst-case scenario of a repeat of Elk Grove’s partially built outlet mall that sat without progress for a decade before being demolished earlier this year.

“I wouldn’t want that to happen again,” she said.

Jordan said the city will work on market analyses as it moves forward with the project planning and will use feedback to refine the project.

He added that city staff hopes to present a refined site plan to the City Council early next year.

Regarding when construction could begin on the project, Jordan said it is too early to tell.

“We’re certainly not going to make the 2020 construction season,” he said. “It would be nice to get to 2021. I don’t know, sitting here today, that we’re going to get there.”

Public open space is placed along Civic Center Drive, and is placed to enrich and benefit the existing life and energy from the community and aquatics center(s) to the south. Open space is hugged on three sides by retail, small shops, and/or restaurants to create an intimately scaled public space that compliments the larger scale civic, outdoor space across the street.

Concept Information is courtesy of city of Elk Grove.