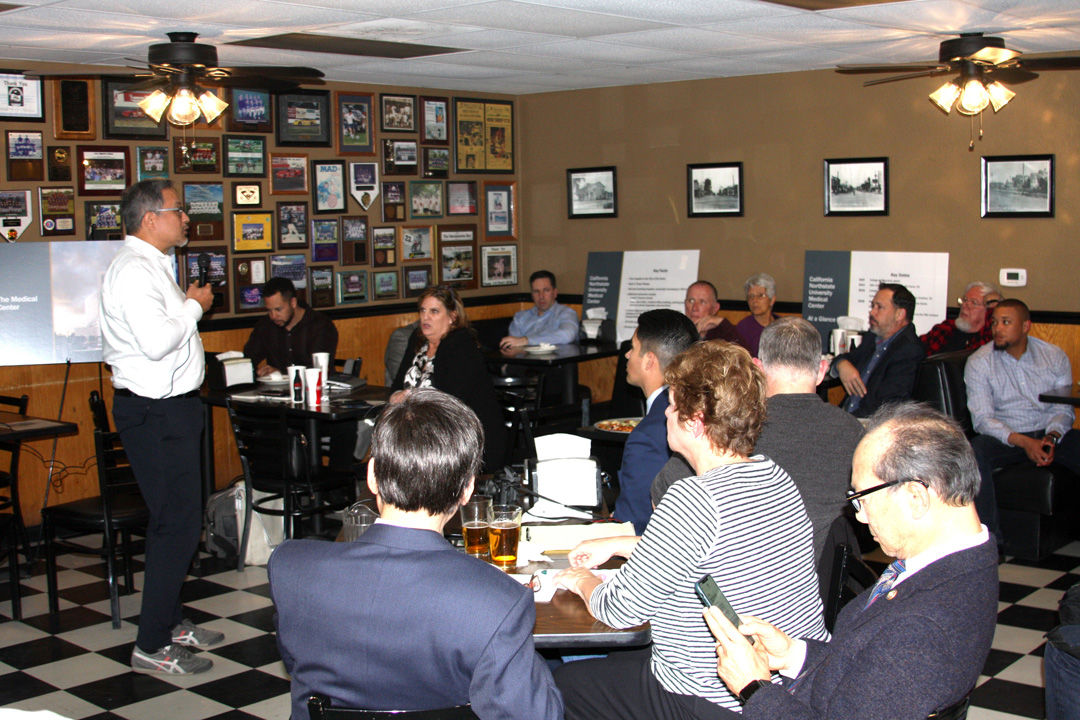 About 30 people attend the informational meeting on the proposed hospital at Fat Mike’s Pizza in Sheldon. 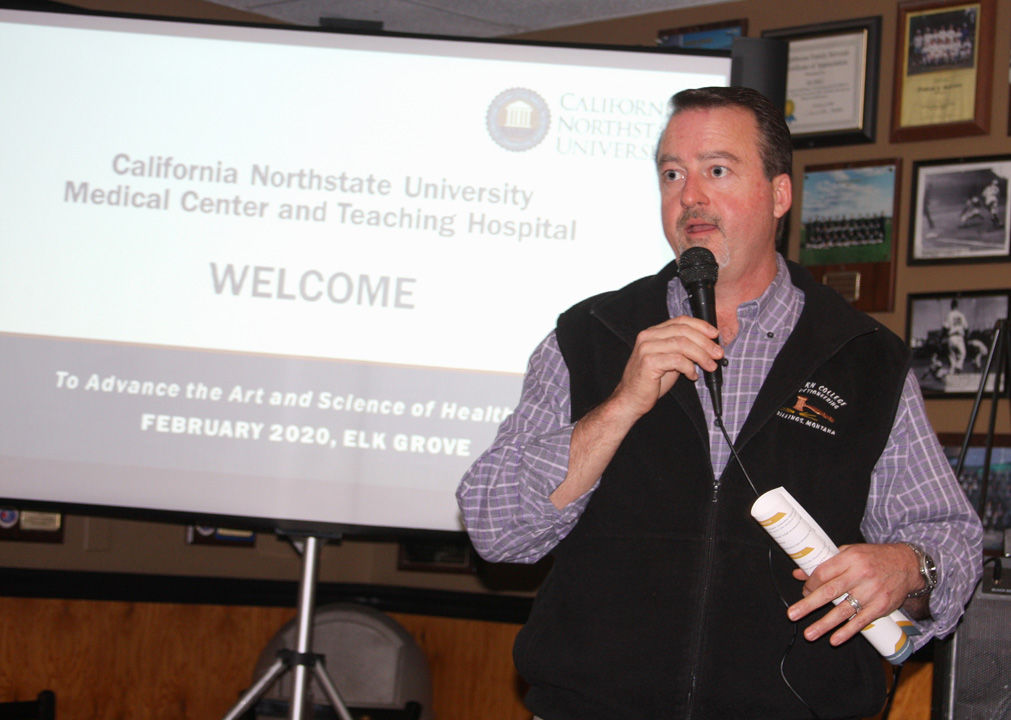 About 30 people attend the informational meeting on the proposed hospital at Fat Mike’s Pizza in Sheldon.

“I know that OSHPD (Office of Statewide Health Planning and Development) and some of the standards that are put on (the construction of) hospitals are pretty onerous and that the oversight is pretty strict,” he said. “So, I don’t know. I know that they like to be aggressive and assertive in what they do. If they think it’s realistic, okay. But it seems awfully optimistic.”

Hume, who represents the council’s District 2, which covers a large, heavily rural region in eastern Elk Grove and includes the Old Town and Sheldon areas, made that comment following a meeting in which the university discussed their plans for their proposed hospital.

The meeting, which was held at Fat Mike’s Pizza on Grant Line Road, was the first of four similar meetings that are scheduled for each of the city’s four council districts. Elk Grove Vice Mayor Steve Detrick held his meeting at Steve’s Pizza on Feb. 18, after press time.

City Council Member Stephanie Nguyen plans to host her meeting at 6 p.m. on March 2 at the Round Table Pizza at 10054 Bruceville Road. Her council colleague, Darren Suen said that he will have a meeting a 6 p.m. on Feb. 25 at Pins N Strikes, 3443 Laguna Blvd.

CNU President and CEO Alvin Cheung told the Citizen that the university intends to meet its goal for completing the hospital in the fall of 2022.

“I think with everything else in life, you set a goal and you work as hard as you can toward meeting that goal, and that is what we’re (doing),” he said. “If we don’t set a goal, we don’t have a target to work toward.

“So, in our planning process, we recognize this goal is aggressive, but it’s not impossible.”

Hume additionally told the Citizen that he has a variety of concerns regarding California Northstate University’s proposal to build a teaching hospital in the Stonelake neighborhood.

“I’ve got all kinds of concerns,” he said. “Does it fit? Do they address some of the concerns that were raised here (at the meeting) tonight with respect to traffic and circulation and flooding and floodplain and neighborhood issues?

“If you take all of the neighborhood concerns away, health care is a very vital industry and important to every community, if there’s adequate access to it. So, generally hospitals are a good thing, and I support them and I support the jobs that they bring. But they have to make sure that they’ve gone through all the right processes for that location.”

Part of the university’s processes is meeting the requirement to complete their application for their proposed hospital.

“It will take 12 to 18 months to process,” he said. “I don’t think they’re going to make the 12 months, so if you look out to 18 months, that would be the end of summer where it will be working through the meetings.”

The Planning Commission and City Council has yet to vote on the project for approval, and the property would still need to be rezoned.

Cheung told the Citizen that the Environmental Impact Report (EIR) for the project is currently being drafted.

Paolo Diaz, project manager for the proposed hospital, announced that the university is working toward breaking ground for the hospital “sometime next year.”

“We’re trying to move as quickly as possible, so that CNU can get their hospital,” he said. “There’s a lot of things in play, a lot of different approvals that need to happen, not only within the city of Elk Grove, but also with the state, and then after that with licensing.”

Attendees at the Feb. 11 meeting included Stonelake resident Jan Smutny-Jones, a member of Neighbors Ensuring Sincere Transparency (NEST), which is a community group that opposes the construction of a hospital in the Stonelake neighborhood.

Smutny-Jones expressed disappointment that the City Council did not make the NEST group aware that CNU filed an Assembly Bill (AB) 900 application with the state. The bill expedites judicial reviews of challenges to various large development projects under the California Environmental Quality Act (CEQA).

“There was zero notice (given to NEST) that (the application) was going into the governor’s office,” he said.

“As I read the legislation, AB 900 does nothing, nothing to expedite the CEQA EIR processing, nothing,” he said. “What it does do is if someone sues the project over CEQA, it accelerates that lawsuit to the court. That’s all it does.”

Holloway then asked Smutny-Jones, who is an attorney, if NEST is planning to sue the university.

“We’ll see what comes out of the EIR now, won’t we, Brian?” Smutny-Jones responded.

Hume told the Citizen that he understands the need for AB 900.

“I believe, absolutely, that people should make sure that the environmental concerns have been studied and addressed, but to have lawsuits that tie them up indefinitely, I don’t think makes a lot of sense.”

Smutny-Jones also addressed the location of the hospital, which he noted is within an “international flyway, next to a bunch of bird reserves.”

Some residents were concerned about the plan to build a hospital within a 200-year floodplain.

Also addressed was the future status of the Stonelake Landing shopping center, which lies in the footprint of the proposed hospital.

This center, which is located adjacent to the current CNU campus, was purchased by the university in 2018.

CNU plans to raze portions of this retail center in preparation for building its hospital.

Despite stated concerns from residents who object the plan to eliminate part of the shopping center, CNU stresses that the center was 50% vacant when they acquired it, and that it had always struggled as a retail center.

According to the university, the remaining tenants have been offered the options of either being relocated to a nearby property, with all expenses paid by CNU, or having their leases bought out by the university.

As for the hospital project itself, the university plans to construct this project in phases.

Featured in the project’s second and third phases are another 150 beds, a Level II trauma center designation, an outpatient clinic, a medical office building, two parking garages, a medical school expansion and a dormitory.