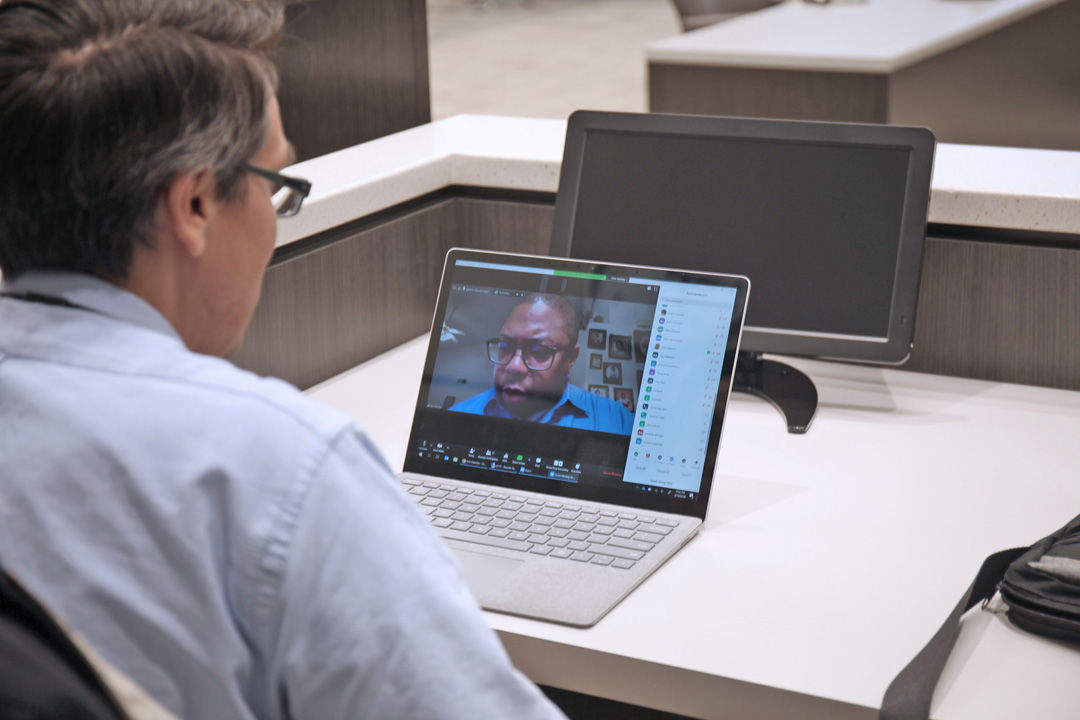 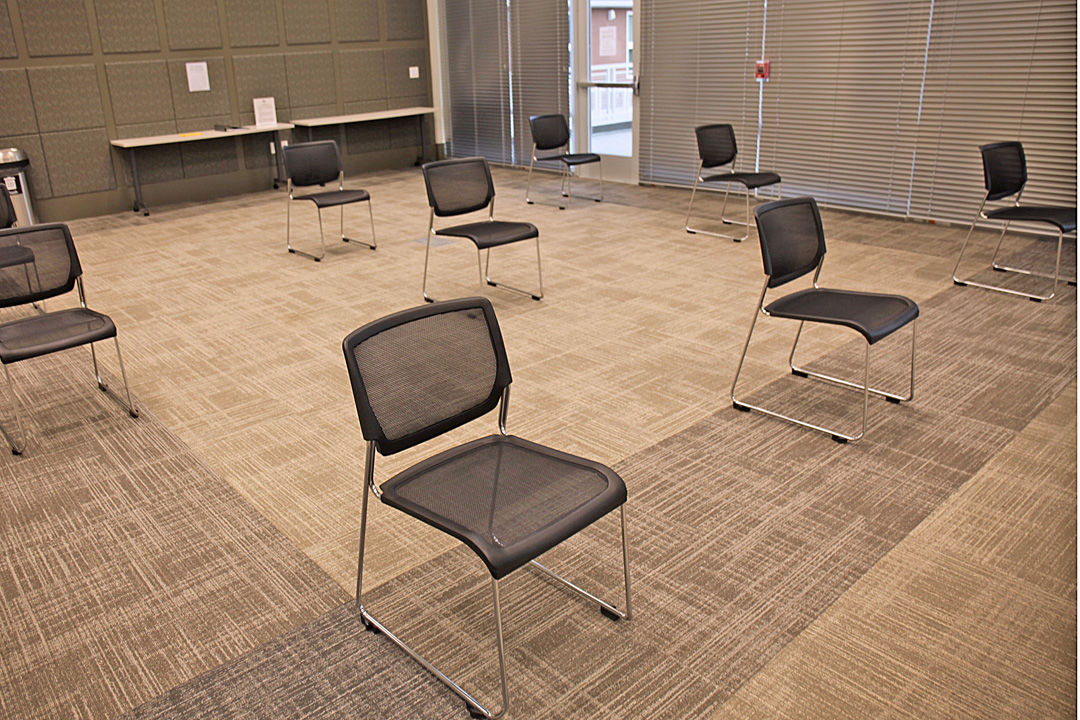 Audience seating is spaced at least 6 feet apart under the principle of social distancing to avoid exposure to the coronavirus. 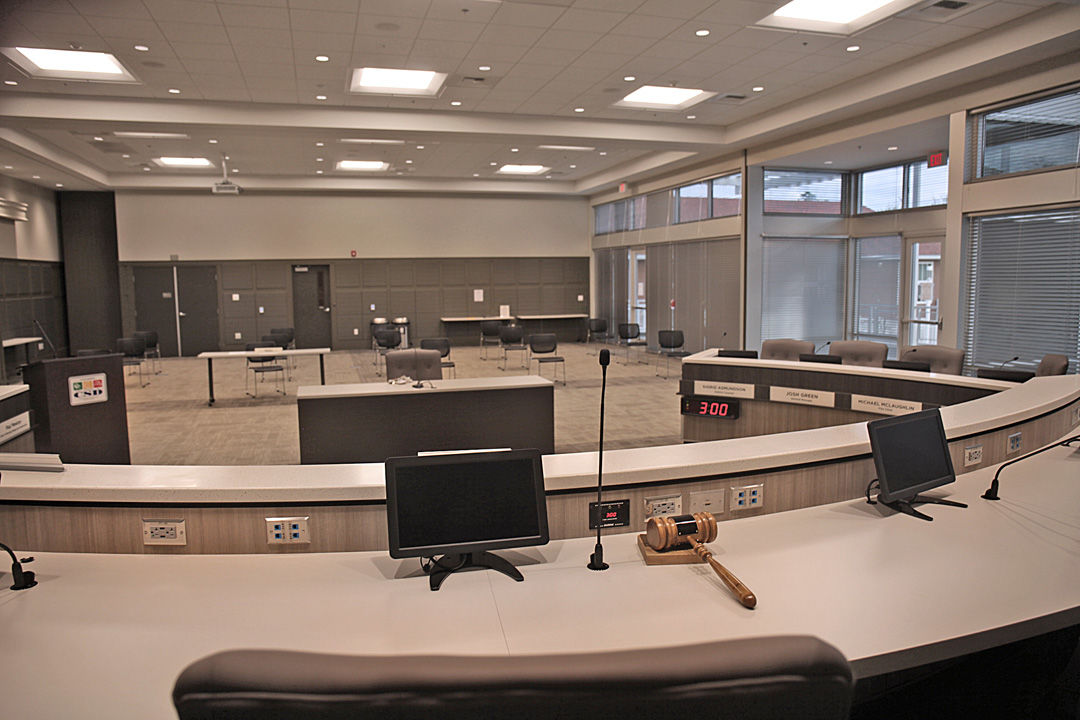 The Cosumnes Community Services District (CSD board’s dais sits empty during their special meeting on March 18. Board members and administrators instead met in a teleconference that night. Sacramento County public health officials that week called upon residents to avoid public gatherings in order to prevent the spread of the coronavirus.

Audience seating is spaced at least 6 feet apart under the principle of social distancing to avoid exposure to the coronavirus.

The Cosumnes Community Services District (CSD board’s dais sits empty during their special meeting on March 18. Board members and administrators instead met in a teleconference that night. Sacramento County public health officials that week called upon residents to avoid public gatherings in order to prevent the spread of the coronavirus.

The Cosumnes Community Services District (CSD)’s directors on March 18 held a meeting without setting foot in their board chambers.

They instead held a teleconference-style meeting where the directors and CSD administrators participated by either using a telephone or an online camera. They were either at their homes or offices.

Only two CSD staff members sat in the board chambers to produce the meeting live on the internet by using the Zoom computer application. The audience’s chairs were arranged to be at least 6 feet apart in the room. Nobody from the public, except two Citizen staff members, attended the session. The public was invited to view the meeting live and submit comments through the CSD’s website.

This meeting was held the day after Sacramento County public health officials urged all residents to stay home and avoid public gatherings in order to slow down the spread of the novel coronavirus (COVID-19).

The CSD board as well as Cosumnes Fire Chief Mike McLaughlin and the district’s general manager, Joshua Green practiced that measure on March 18.

Green told the Citizen this was the first time that the CSD board held a remote meeting.

“We had a few kinks that still need to be worked out, but until it is safe to be in the same social space again, we will continue to refine this tool for meetings, including board meetings,” he said.

The CSD governs the Cosumnes Fire Department and Elk Grove’s parks and recreation system. Last week, the district closed their fire stations and recreation centers to the public. Their parks and trails remain open.

During the early evening of March 18, CSD directors voted to proclaim a local emergency and ratify local emergencies declared by Sacramento County and the cities of Elk Grove and Galt. Those agencies all sit within the CSD’s 157 square-mile service area.

At the meeting, Green announced that his staff activated the district’s emergency operations plan on March 13. He said that he believed they were one of the earliest agencies in the region to take that action.

Green praised the district staff’s work during the coronavirus situation.

“I couldn’t be more thankful and proud of the personnel we have and their commitment to the well-being of all of our community,” he said.

The district is now preparing for the period when they expect to suffer losses in revenue after the parks staff canceled or postponed recreation activities and programs in response to the COVID-19 situation.

Nitish Sharma, the CSD’s chief administrative officer, told the board that the district could lose an estimated $259,000 in recreation revenues this month. They may also lose up to nearly $700,000 per month afterward.

Sharma noted that the district previously saved funds over the past few years, and set aside $3.3 million to offset future revenue losses and increases in expenditures.

“Over the past few years, the district has done a really job to set some money aside for a moment like this,” he said.

Green told the Citizen that his staff plans to rebalance their district’s current budget plan next month and to improve their operating budget’s financial stability.

In his March 18 report on the CSD’s fire department, McLaughlin told the CSD board that they remain fully staffed in responding to calls. He mentioned they are working with Sacramento County staff to create a plan in the event that many fire personnel become sick or if the number of calls is excessive.

“While the trigger points for these plans are quite down the road, we want to make sure that we get those plans in place,” McLaughlin said.

He noted the challenge of providing enough protective equipment such as disposable masks for the fire staff over the long-term.

The fire chief mentioned that his department’s service call volume has been “leveling out” that week, which could be related to Sacramento County officials urging residents to stay at home.

Board President Orlando Fuentes thanked everyone before he adjourned the meeting.

“It’s a very difficult time for everyone – from the upper ranks to the lower ranks,” he said. “I think we’re doing great, we’re hanging in there.”