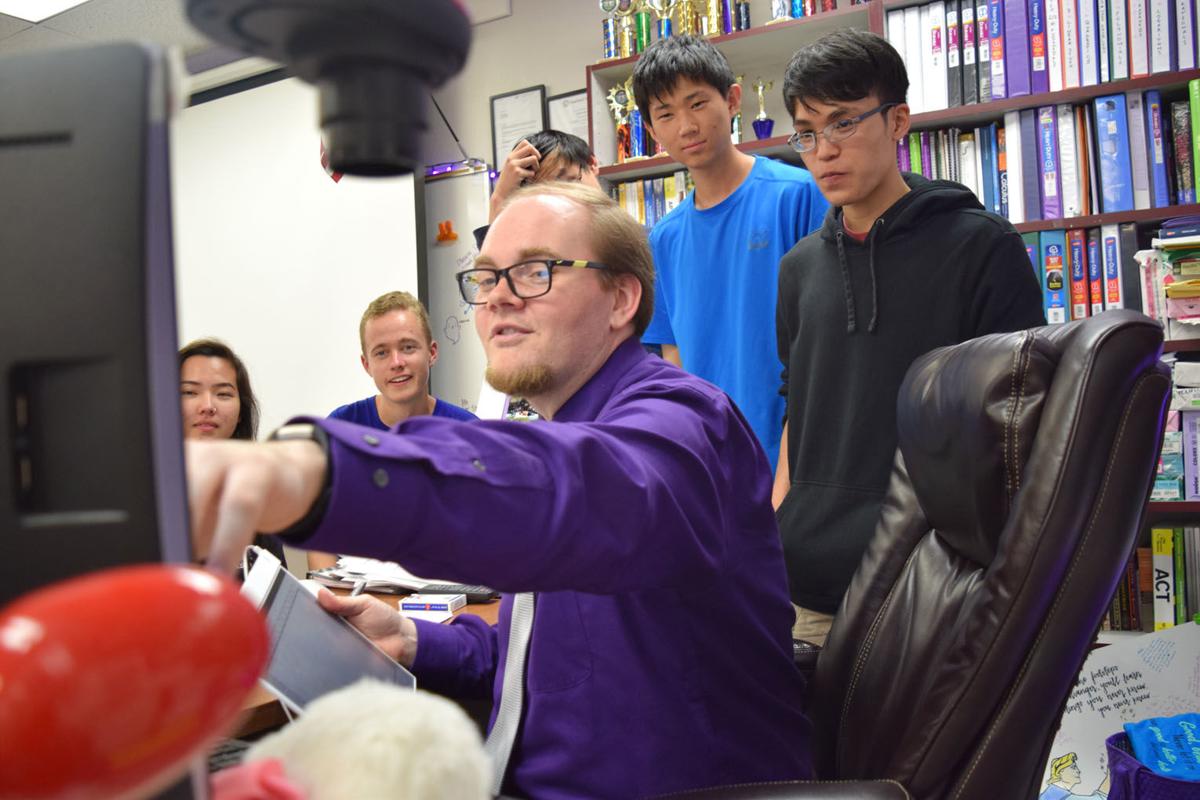 Michael Steele and his math students at Franklin High School. 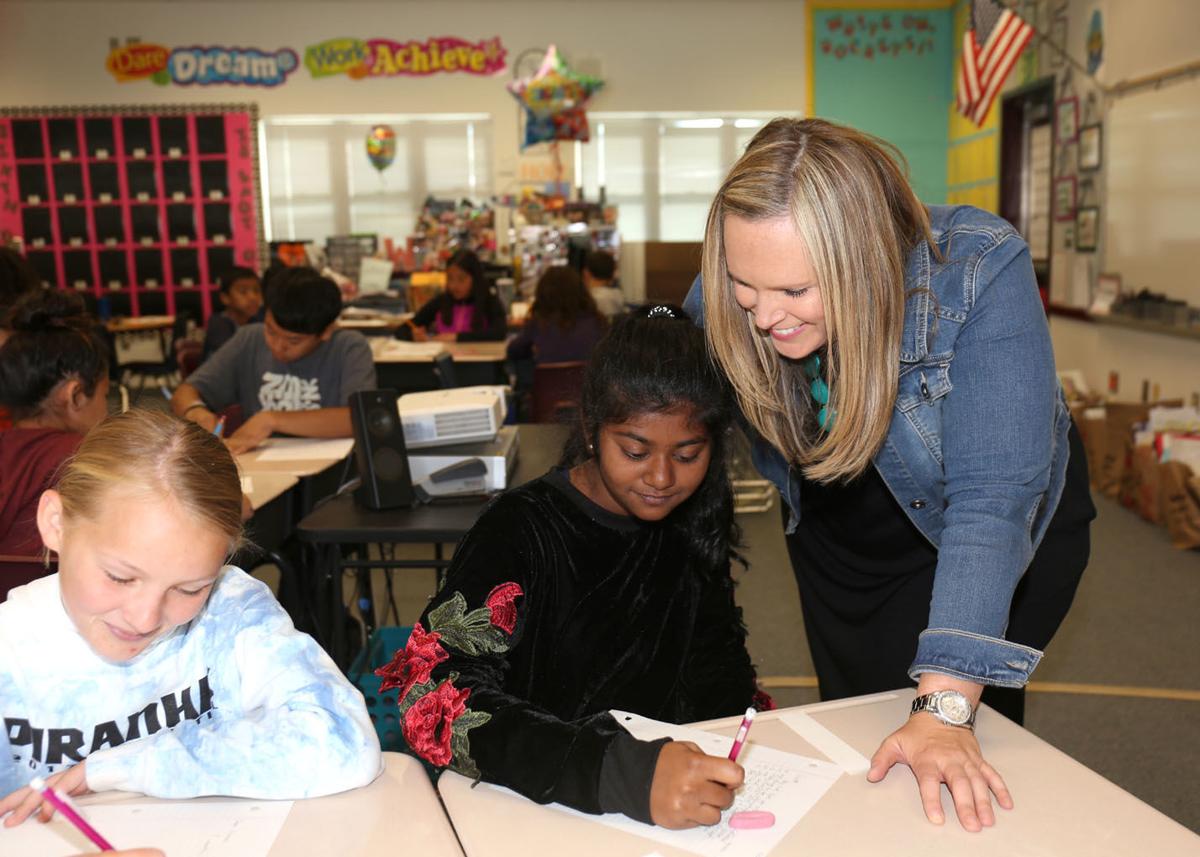 Michael Steele and his math students at Franklin High School.

The Elk Grove school district announced their 2018 Teachers of the Year last month when their prize patrol of officials surprised the honorees.

Michael Steele, a math teacher at Franklin High School, said that his mother was working at the school’s concessions stand when she was notified about him.

“She immediately panicked and said, ‘What’s wrong? Is he hurt?” he recalled.

She soon joined the patrol that walked into Steele’s classroom.

There are their stories.

Michael Steele recalled that he had little interest in mathematics while growing up in Elk Grove. He then took Mr. Knock’s math class at Harriet Eddy Middle School.

“He was gruff and loud, and he was funny,” Steele said. “Somewhere along the way I just enjoyed learning and thinking about these things, and he made me feel like I was good at the subject.”

Steele told the Citizen about his passion for using math concepts to solve puzzles, but he often spoke about working to ensure that his math students at Franklin High School feel confident in class.

“I want to make sure that you feel safe in this classroom…and you feel connected to people around you, and that math is just a part of that life,” he said.

Steele’s classroom is decorated with photographs of students who scored high on the Advanced Placement exam. There are also thank-you letters from prestigious universities like Stanford and MIT where his students enrolled.

Steele kept a few artifacts of old pranks, such as a large cartoon face that was placed on the ceiling above a student’s desk. He recalled that the student was so focused on his work and he didn’t notice the face for a few months.

The teacher also has a bounty of golden animal figures such as a large chicken that were gifted by students.

Steele said that he enjoys watching shy and quiet students speak up and engage in classes; he added that teaching has taught him to open up.

“Math isn’t necessarily the most engaging subject to every student - many feel frustrated, they don’t like the abstraction of it and they feel it doesn’t apply to their everyday life,” he said. “I like turning that on its head.”

Steele was born in Arkansas and moved to Elk Grove at age 4. He said that teachers mistakenly believed that he had a speech impediment, but it was actually his thick Arkansas accent. During his interview, he demonstrated that accent by counting 1 to 4.

Steele said he first wanted to be an English teacher but his attention turned to math during his junior year at Laguna Creek High School. He mentioned that he often “got lost” or absorbed in Mr. Richmond’s lectures on pre-calculus.

Steele said that while he enjoyed English, he had an uneasy feeling about writing essays and wondering if they were well-written.

“But math is open and ready,” he said. “I just show students how to solve puzzles and play with concepts and these little tools that may not seem like they’re useful at the moment, but they build up to something really great.”

Steele went on to major in mathematics at UC Davis and he later earned his teaching credentials through the Teachers Education Institute, which was organized by the Elk Grove school district and San Francisco State University.

Steele said that he long felt confident in teaching and mentioned that he started teaching baseball to children at age 15.

With his new honor as a 2018 Teacher of the Year, he said that he’s proud “to have been from Elk Grove, to have grown up in Elk Grove…and then to represent Elk Grove in this way.”

Hope Weston said that she grew up in a family of educators, and they already knew she was going to be just like them.  Her parents were teachers, and her grandfather was a superintendent of the Del Norte County Unified School District in Crescent City.

“They saw it in me before I saw it in me,” she said. “Everyone knew I was going to be a teacher, it was just in my blood; there was no way around it.”

Weston mentioned that her mother even purchased and stored 15 boxes of children’s books as a gift for her classroom when she started work as an elementary school teacher.

“Teachers usually don’t start out with much,” she said.

Weston has spent 17 years of her career teaching in the Elk Grove school district, she taught at Joseph Sims Elementary School for 12 years before moving on to Elliott Ranch Elementary. The California State University, Sacramento graduate earned her teaching credential though the same Teachers Education Institute as fellow Teacher of the Year Michael Steele.

“We were ready to step out and teach in Elk Grove, we were versed in the ways of Elk Grove, ” Weston said about the Elk Grove school district’s program.

She credited her master teacher Tracy Candini for mentoring her.

“My master teacher had a lot of faith in me and let me practice,” Weston said. “He’s one of my best friends.”

She summarized her philosophy of education as making sure that her students clearly know her expectations of them.

“I think kids need accountability and they need to be held responsible of what’s asked of them,” Weston said. “That takes guidance and a lot of practice.”

However, she also gives them fun activities such as skits, poster-making and presentations.

“We work hard, but we’re also an elementary school and I want them to enjoy school and love learning.”

Weston concluded the she always enjoys coming to work at Elliott Ranch.

“You never have the same day twice,” she said. “You spend time with kids who are full of energy and life, and you get to be a part of who they become.”