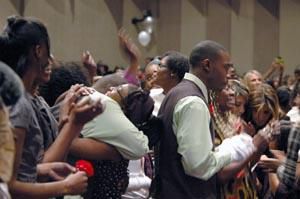 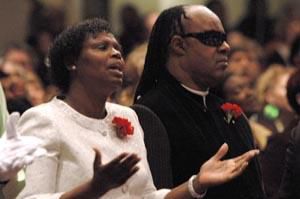 Ben Underwood left the world as a wealthy man.

More than a thousand friends, relatives, classmates, church members and community members gathered at the Harvest Church of Elk Grove to honor him at his Jan. 26 funeral.

The Elk Grove resident gained international attention as a blind teenager who produced “clicking” sounds to guide him. He lost his eyesight from cancer at age two.

However, that disability never took away his optimism.

“’Benjamin Underwood, you can do anything,’” his mother Aquanetta Gordon recalled telling him. “Ben would do everything.”

Underwood died from cancer on Jan. 19 and his memorial service was held on his 17th birthday.

“When his circumstances didn’t change, he was not defeated but considered himself victorious,” Bishop Esley Simmons said during the funeral, drawing loud applause.

In the few years before his death, Underwood appeared on national TV shows like the Oprah Winfrey Show to talk about his condition and ability to use “echolocation” or the skill of making sounds and then hearing them bounce off nearby objects.

That skill enabled him to walk without a cane.

His funeral was an energetic celebration of his life as heard in the songs of one blind singer who was touched by Underwood’s story.

Stevie Wonder appeared at the memorial where he sang two songs and delivered a speech about Underwood, who he called a “prince of love.”

He praised Underwood for “his words of encouragement to those who had sight, not vision.”

Wonder first met and befriended Underwood at a convention on technology for the blind.

Several speakers reminisced about Underwood’s Christian faith and his fearlessness toward death.

“You had a remarkable kind of hope/Hope of another kind/Thankfully for all of us/You left that legacy behind,” her poem concluded.

Pastor Perry Kallevig of the Harvest Church, recalled his visit to Underwood at his home before his death. Kallevig said that he was having a difficult afternoon before he saw Underwood in his bed where he asked the pastor to scratch his arms.

“OK, you got it. Perfect, perfect, stay there,’” Kallevig remembered Underwood telling him, causing the audience to laugh.

Kallevig then said that his stress from that day disappeared.

“That load was completely lifted in just a moment,” he said, adding that it was a lesson from God.

Pastor Lewis Pugh and his wife, Devon said they were the first people to see Underwood as a newborn in a hospital nursery.

“We were so honored to be a part of Benjamin’s life,” Devon said.

She hoped that Underwood would remember colors before he went blind and said that he forgot them years later. She then read a poem about colors at Underwood’s memorial.

A video of Underwood’s life was played at the funeral and included clips of him dancing to music as well as photographs of him surfing and posing like a model to the delight of the audience.

Wonder later appeared and spoke about Underwood’s religious commitment and his experience of meeting him.

After he sang a rousing song that got numerous audience members on their feet to clap and sing along, the band kept playing and Gordon walked onstage and smiled.

She wore a white dress adorned with a bright, red flower as she spoke about her son.

Gordon spoke about her son’s courage and mentioned the moment when she told Underwood that he could die from cancer. She recalled that he did not fear death.

“Just be ready to meet me there,” Underwood told her.

Dozens of funeral attendees gave their condolences to Gordon after the funeral. Many hugged her and smiled, some cried.

“I am just in awe, it’s just beautiful,” Gordon told the Citizen about the large turnout at the funeral. “It shows all the love from every walk of life.”

Herman Bass was among many students from local schools who attended the memorial.

“He was a loving, caring, kind person, he welcomed everybody into his life,” he recalled. “I’d love to see him again.”