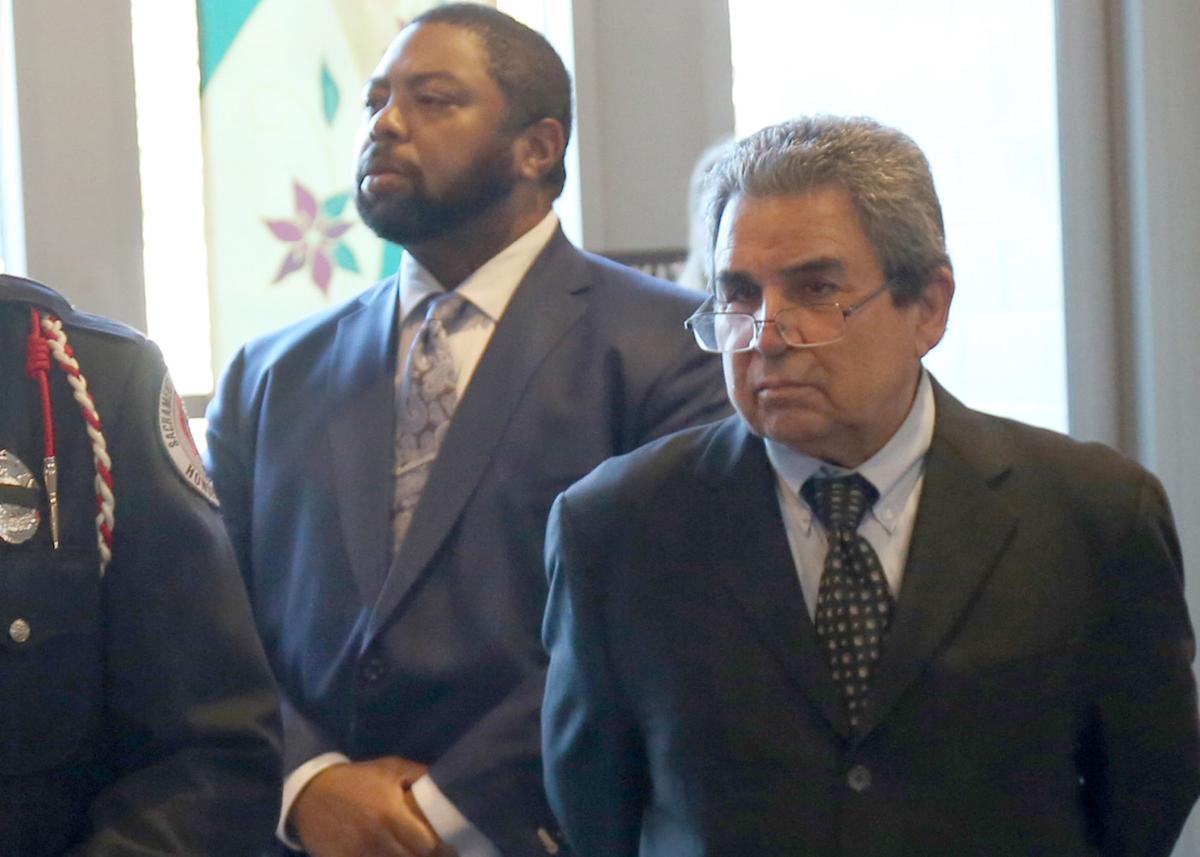 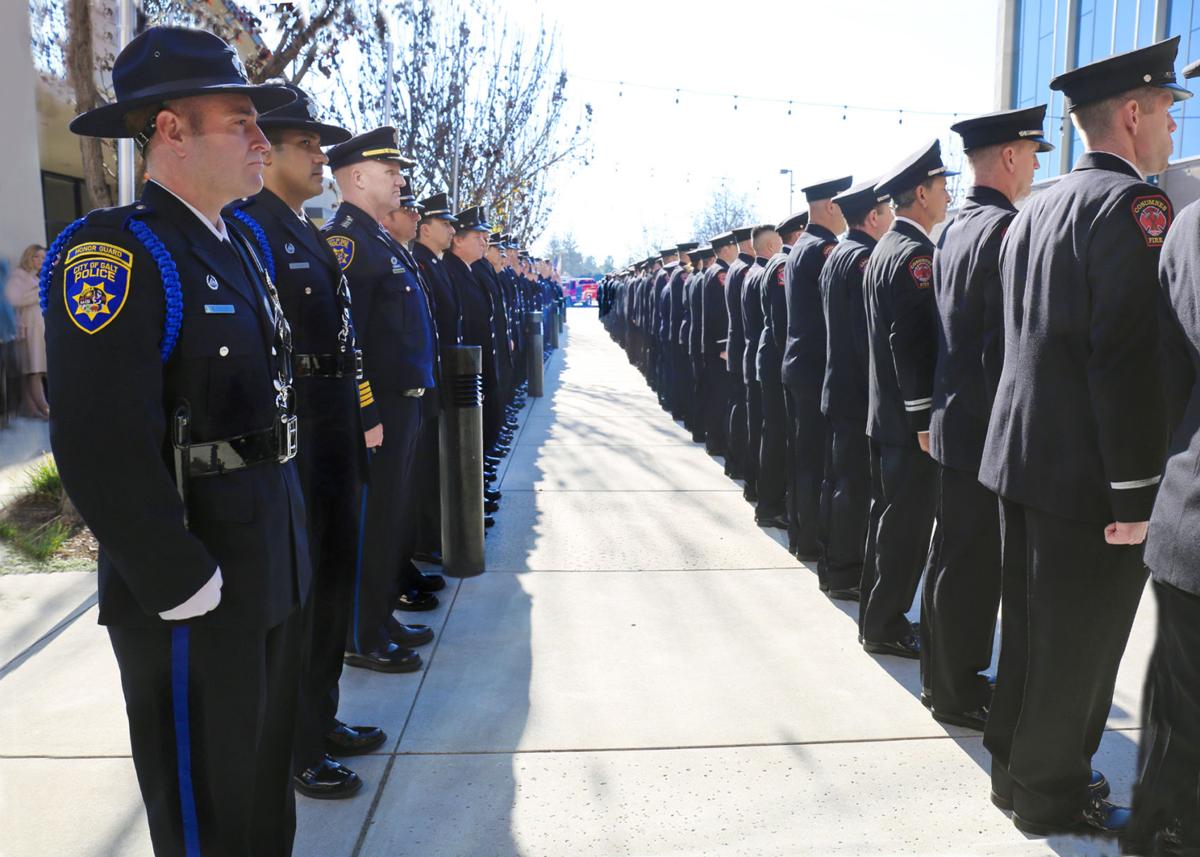 Firefighters and police officers form a ‘sea of blue’ to welcome Albaro Meraz’s family at his funeral. 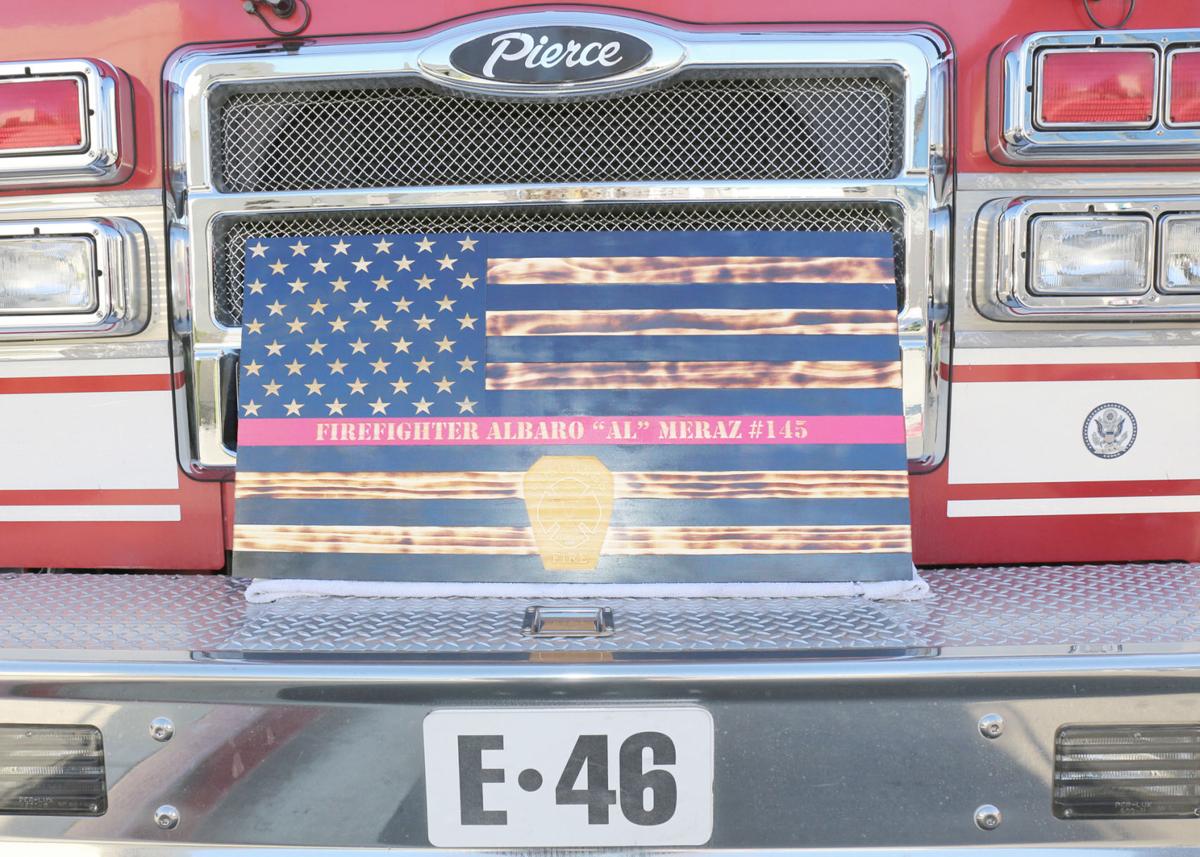 A memorial plaque decorates a fire engine from Cosumnes Fire Station 46 in Galt. 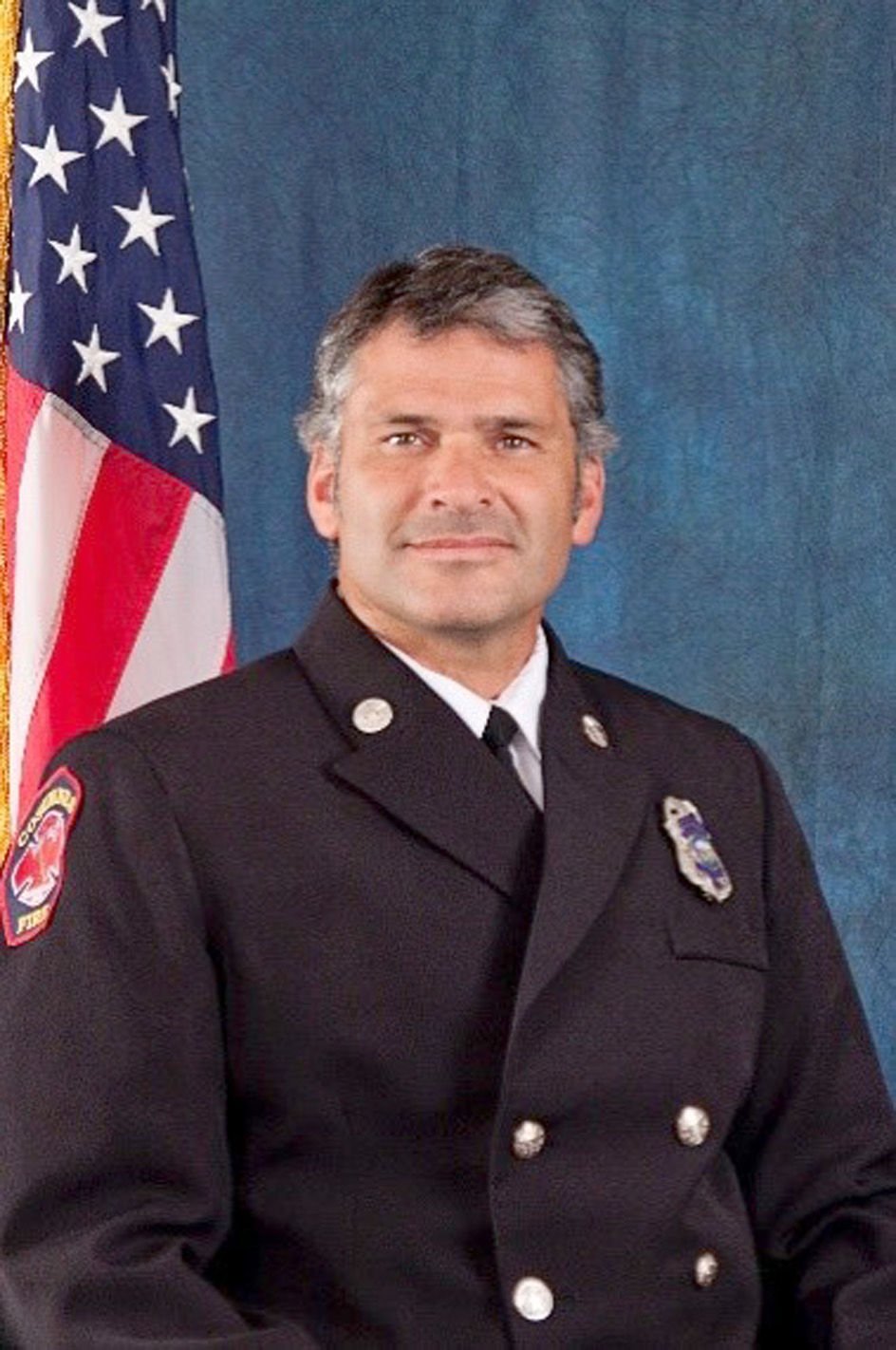 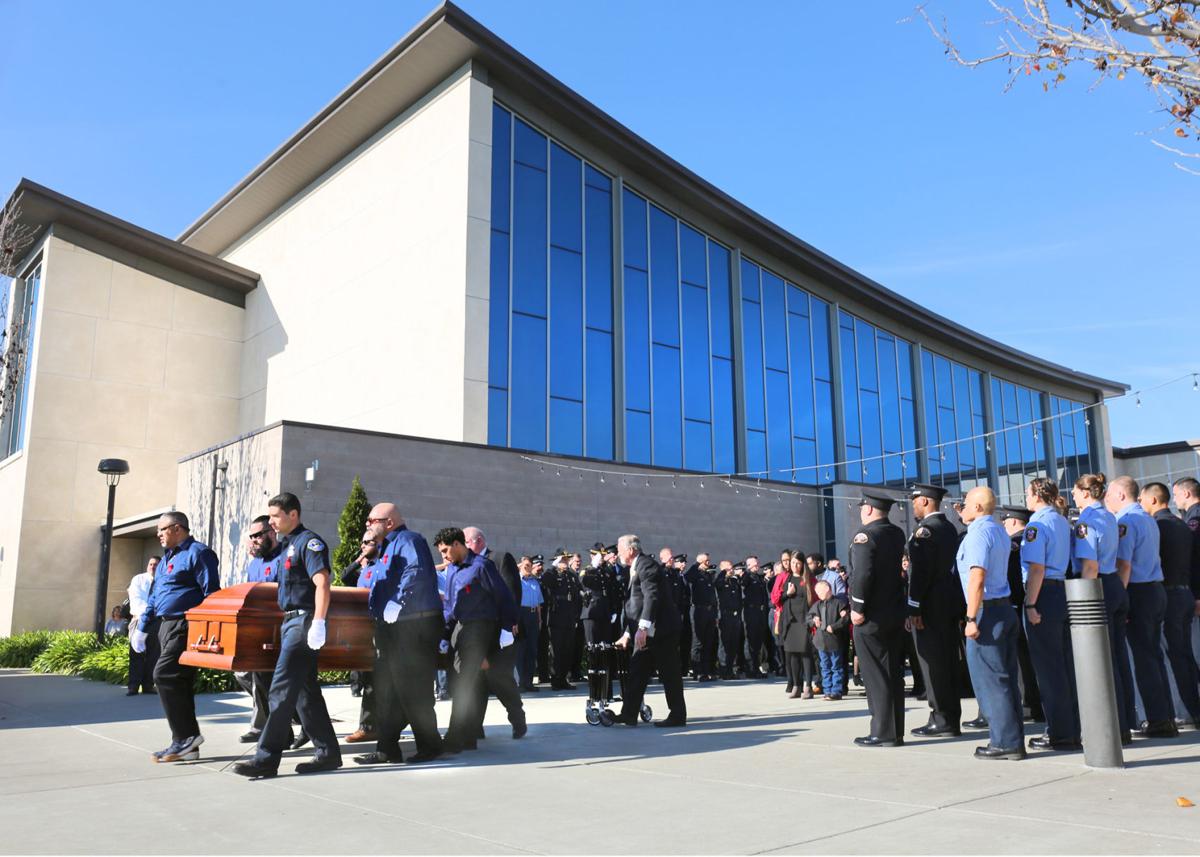 Firefighters and police officers salute Albaro Meraz and his family at the Good Shepherd Catholic Church on Dec. 29.

Firefighters and police officers form a ‘sea of blue’ to welcome Albaro Meraz’s family at his funeral.

A memorial plaque decorates a fire engine from Cosumnes Fire Station 46 in Galt.

Firefighters and police officers salute Albaro Meraz and his family at the Good Shepherd Catholic Church on Dec. 29.

Hundreds of firefighters and police officers from across the Sacramento region on Dec. 29 lined up and formed a “sea of blue” as they saluted the family members of Cosumnes Firefighter Albaro “Al” Meraz.

More than a thousand people paid their respects to him at his funeral held at the Good Shepherd Catholic Church in Elk Grove.

Meraz died in a vehicle crash on Highway 99 near Sheldon Road on Dec. 22. The 17-year veteran firefighter was off-duty at the time. Meraz was 52.

On Christmas Eve, a vehicle containing Meraz was taken to fire stations where he worked.

Sacramento, Folsom, and Sacramento Metropolitan firefighters provided fire coverage for Elk Grove and Galt that day so that on-duty Cosumnes firefighters could attend his funeral.

“We are here to support the family by the power of presence,” Father Leon Juchniewicz of Good Shepherd said in a speech at the funeral. “Just to be here is powerful.”

The Sacramento Area Firefighters Pipes and Drums band performed while Meraz’s brothers and nephews carried his casket. His young nieces and nephews also read scriptures during the traditional Catholic funeral.

A recording of Meraz’s last alarm dispatch was played at the funeral.

“His presence will be forever remembered,” the dispatcher said.

Meraz last served at a Galt fire station, and he was in the process of being transferred to Station 73 on Bond Road before his death. He built a plaque that bore the Station 73 name for a fire engine there. The Cosumnes Fire staff displayed this work at the funeral.

“He was a guy who gave back and didn’t take his job for granted,” Cosumnes Fire spokesperson Joshua Rubinstein said.

Memories of the firefighter firefighter’s passion for his work and family were shared that day.

Cosumnes Firefighter Bill Herbert considered his co-worker of 20 years to be an unofficial leader.

Meraz played key roles in several Cosumnes Fire projects, such as the Bomberos program where local firefighters trained Mexican firefighters and donated equipment to them. He also won a Firemark Award for providing smoke detectors to non-English speaking residents.

Meraz was the son of Mexican immigrants who grew up with seven siblings in a small home that had three bedrooms and one bathroom.

“Maybe this is the reason why he was so good at sharing,” Snider said.

Meraz desired to be a firefighter since he was a child who grew up near a fire station. He delivered newspapers for 10 years and he saved his earnings to pay for his tuition at Christian Brothers High School in Sacramento.

Meraz worked for Bel Air until he was hired as a firefighter for the then-Elk Grove Fire Department in 2001. Snider said that Meraz loved to mentor firefighters and he also worked as a Spanish interpreter for the fire department, even if he was off-duty.

“Al loved all aspects of his career: brotherhood, volunteering…and the ability to positively influence and enrich other people’s lives,” he said.

Meraz’s love for his family’s children was also shared. He had a custom of creating “adventures” for them, such as “deep-sea fishing in a pool,” or searching for imaginary villains who stole a few cents. Meraz and his wife, Dina were the parents of three children.

“His greatest attributes were simply being an amazing father,” Snider said.

Meraz’s father passed away two months ago; he spent as much time with him as he could before his death.

“Al always kept things positive with his father,” he said.

Cosumnes Fire Chief Mike McLaughlin paused to reflect on the support for Meraz at the funeral.

“There are no words that can describe being a part of the fire family and seeing everyone come together to pay respects for a brother,” he said. “He was such a great man that touched everybody’s hearts and spirits, which is evident by everyone who is here today.”