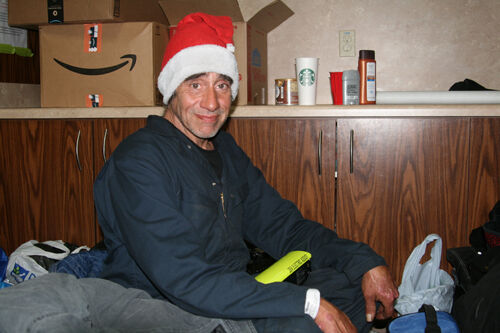 David Cuellar, a local homeless man, sits on a cot in the OWL center in the basement of the Elk Grove United Methodist Church, on Dec. 17. 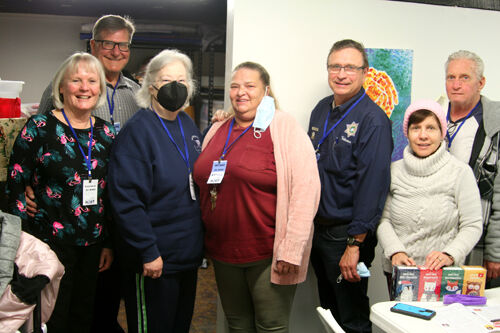 David Cuellar, a local homeless man, sits on a cot in the OWL center in the basement of the Elk Grove United Methodist Church, on Dec. 17.

OWL centers provide homeless participants, who are at least 18 years old, with relief from the coldest nights in Elk Grove through overnight spaces at participating local churches.

This program, which began on Dec. 1, continues through April 30, and warming center locations will vary throughout the season. Those using an OWL center are offered a warm bed and a hot meal, and bus passes and sack lunches are also available through this program.

OWL centers are made possible through a cooperative of the city of Elk Grove, the Cosumnes Community Services District, the Elk Grove Homeless Assistance Resource Team (HART) and local faith-based organizations. The Elk Grove Police Department’s Volunteers in Police Service (VIPS) also assist with this program.

Overnight guests of the program are required to sign a list of regulations, which include the prohibition of in-and-out privileges. Once a guest leaves a warming center during an evening, they are not allowed to return in the same evening.

During the Citizen’s Dec. 17 visit to the warming center at the Elk Grove United Methodist Church, Elk Grove HART board member Mark Hedlund mentioned that since the launching of this program earlier this month, the number of the center’s participants had increased.

“For the first few nights, we had around six (guests), and then we started climbing up,” he said. “Thirteen people (used this service) tonight. We had 11 last night. Two nights before that we had 11, and then in between we had nine.”

Hedlund stressed that the security of the center’s guests is extremely important, and therefore, the doors of the center are locked each night. Lights are turned out at 10 p.m. nightly.

Guests have various inquiries and comments about the centers, Hedlund noted.

“Most of them are glad we’re here, most of them are concerned about how long it’s going to last, because with this program, it’s triggered by the weather,” he said.

The low temperature forecasted for Elk Grove on the night of the Citizen’s visit to the warming center was 34 degrees. Later that night, the digital reader in front of Farmers & Merchants Bank, located a short drive from the church, read 27 degrees.

Inside the much warmer Methodist church, guests were beginning to settle down on their sleeping bag-topped cots after being served dinner.

While sitting on his cot, David Cuellar spoke about becoming homeless.

Cuellar, 57, told the Citizen that he moved from San Jose into a house he purchased in south Sacramento in 1999. After 18 years of living in that house, Cuellar experienced a tragedy that led to his homelessness.

“I was in a motorcycle accident, and I was self-employed,” he said. “I couldn’t collect unemployment or disability, so I lost my house. It was already kind of messed up, because of (his) divorce. I was in a wheelchair nine months, because my foot got amputated (after the accident) and they put it back on.”

Cuellar, who also underwent back surgery, mentioned that his problems worsened after charges were filed against him for reckless driving and evading arrest.

“I was late for a date and I was splitting lanes at 100 mph,” he said. “I lost my house and was disabled. I get (Supplemental Security Income payments) now, which is $900 and some odd dollars a month, and it’s not enough.”

“They gave me a new pair of shoes and socks, and they have showers here,” he said. “I’ve gone like months without taking a shower before. It depends on where you’re at.”

Another homeless man, who also spent the night in the warming center on Dec. 17, told the Citizen that he wanted to speak anonymously about the struggles that many homeless people have in being able to bathe daily.

“I believe every homeless person in Elk Grove needs a place to shower every day, not just twice a week, and not just looking at every homeless (person) like they’re a drug addict or they’re nothing, because they all matter,” he said.

The same man noted that he is positive about his future.

“I know I get up every day looking for a job, and I know God’s going to bless me,” he said. “I put in resumes, I go to the library. I’ve been sober for months.

During the Citizen’s visit to the warming center at the Elk Grove United Methodist Church, Hedlund also expressed appreciation for the program’s volunteers.

“Asking people to come down here at 8 (p.m.) and stay until 8 (a.m.), and stay up at least most of the night, maybe take a little bit of a nap, it takes a special person to do that,” he said. “We’ve got awesome people. It’s great.”

Hedlund noted that a lot of the volunteers of this program also volunteered for the former Elk Grove Winter Sanctuary (WINS) program, which also provided temporary, emergency shelter for Elk Grove’s homeless during the coldest times of each year.

Scott Nicholas, who was among the Elk Grove WINS volunteers and now volunteers for the OWL program, said that he has been a longtime volunteer in the community.

“I’ve done a lot of volunteer work over the years and (there is) just a personal satisfaction of helping out,” he said. “I retired in June, so I’ve got more time to help out as needed.”

Gary Sack, a volunteer with Elk Grove VIPS, explained why he enjoys volunteering.

“I like to give back to (the) community a little bit and help people,” he said. “I mean, love one another and we want to help people when we can and how we can.”

Sack shared his observations of the OWL program.

“Just for the short time I’ve been here, there (are) some tired people, some people that look like they’re really happy to have a meal,” he said. “We’ve had a few smiles.

“(Some people) had a hard day, probably. Hopefully, we can make it a little better for them.”

Sunny Gottberg also spoke about her volunteer work with the OWL program.

“Mostly, I sit and talk to the people here that are on the night duty and listen for noises and listen for complaints, and go and make coffee,” she said. “(The program’s guests say) that they didn’t want to be homeless and they have a story for why they are homeless.”

Another volunteer, Elk Grove resident Stacie Onyon, explained why she desires to assist with the OWL program.

“Because I’ve been here, because I was homeless,” she said. “And so, I understand. I was only homeless for three months (in Elk Grove). It was over three years ago. (It felt) like a lifetime. It was real hard. It was something I never expected in my life.”

Onyon, who has been living in the same condominium for the past three years after living in transitional housing through the assistance of Elk Grove HART, added that she is a living example that people can find their way off the streets and into housing.