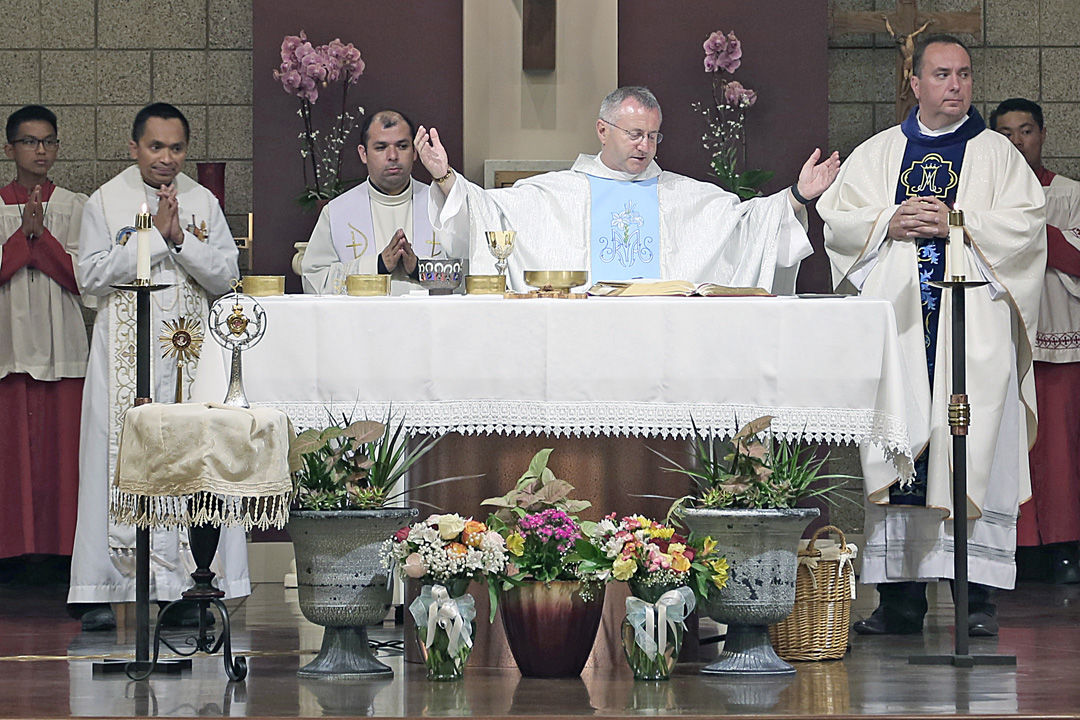 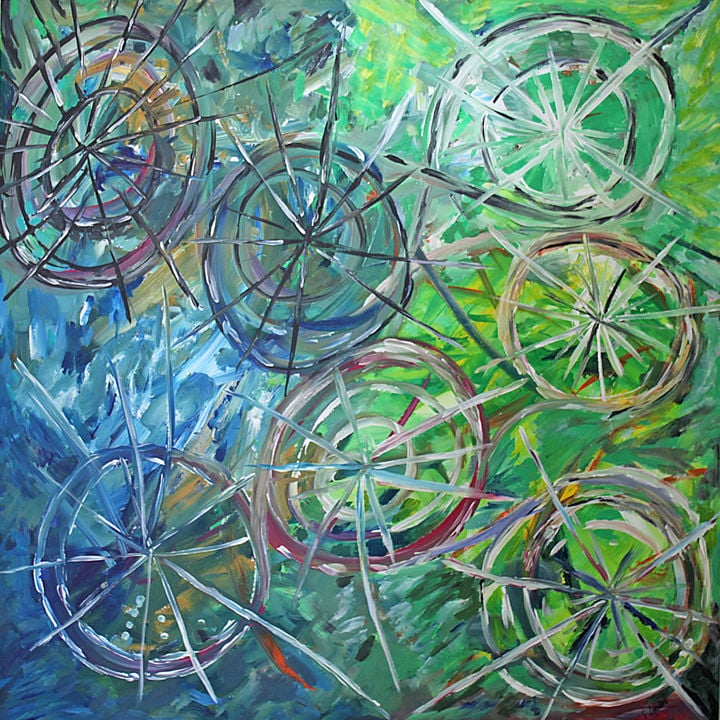 Fr. Sylvester Kwiatkowski expresses his spirituality on the canvas. 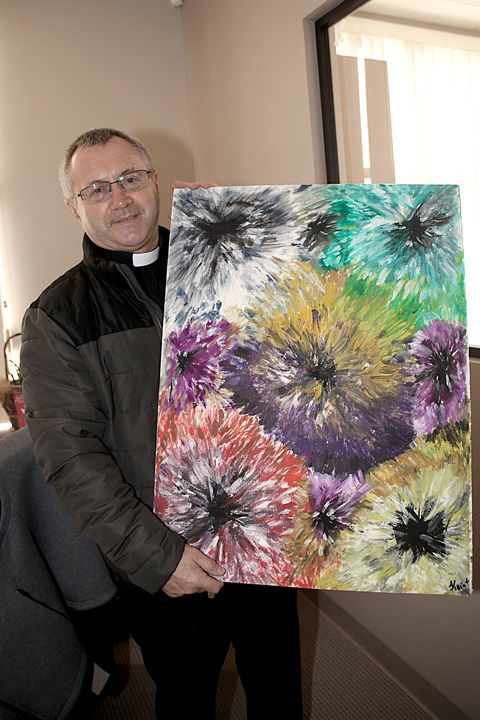 Fr. Sylvester Kwiatkowski has a passion for painting abstract imagery. 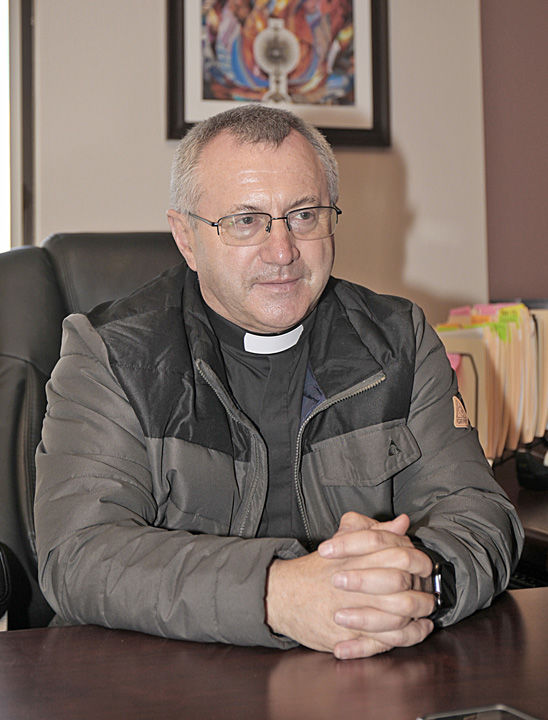 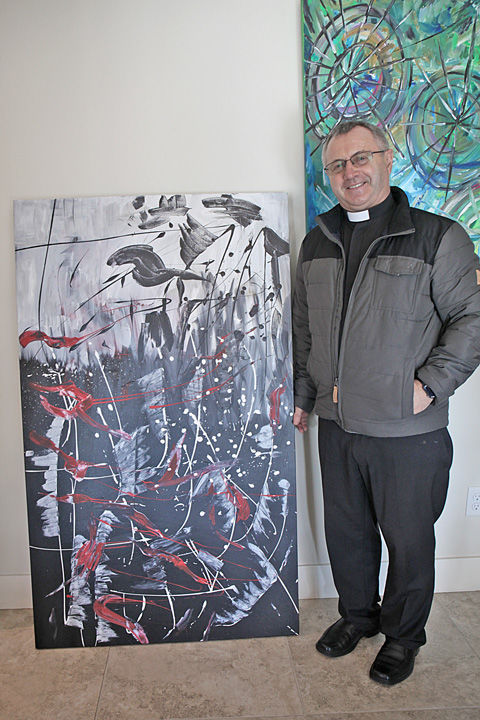 Local pastor shares his passion for the arts

Fr. Sylvester Kwiatkowski of Elk Grove’s St. Maria Goretti Parish spoke with the Citizen about his love for painting.

Fr. Sylvester Kwiatkowski expresses his spirituality on the canvas.

Fr. Sylvester Kwiatkowski has a passion for painting abstract imagery.

Local pastor shares his passion for the arts

Fr. Sylvester Kwiatkowski of Elk Grove’s St. Maria Goretti Parish spoke with the Citizen about his love for painting.

Fr. Sylvester Kwiatkowski came to Elk Grove’s St. Maria Goretti Parish last year with an artistic flare. Parishioners got a sense of that passion during the pastor’s sermons.

The amateur painter and collage artist held a successful art show at the Elk Grove Fine Arts Center last fall and he hopes to bring more art there this spring.

“I was so excited because it was the first show for me in my life,” Kwiatkowski recalled.

Since he’s an artist only by passion and without professional training, he said the show built his confidence.

“The most important thing is that I got lots of positive comments, which were very inspirational and encouraging for me,” he said.

Kwiatkowski is a native of Poland who earned his master’s degree in spirituality from Warsaw University. He is also a graduate of the St. Peter Favre Program in Spiritual Direction, which focuses on Ignatian Spirituality, including the 19th Annotation Retreat and the 30-day Retreat of Silence.

Kwiatkowski has worked in California for 20 years and he served as a chaplain for Polish immigrants, most of whom were involved with Poland’s Solidarity movement with Lech Walesa, a former president of Poland and a Nobel Peace Prize laureate, who was known for his dissidence and union organizing.

Kwiatkowski noted that many of his relatives and friends experienced the Auschwitz concentration camp in Poland during World War II.

“The memories of Auschwitz and WWII are very vivid,” he said.

His brother-in-law (of his sister) was one of the survivors of Auschwitz.

Additionally, Kwiatkowski’s father was separated from his family when he was 14 years old.

“The spirit, the evil of war, was in my house by memories,” he said. “But, also on the other side, I realized later that my parents and grandparents who remember WWII, they never said even one horrible word. I never saw the spirit of hatred or revenge. They talked often of forgiveness. Only forgiveness can give you peace in your heart and freedom. What they experienced during WWII, they taught us that each day is a gift from God. Be thankful for what you have. Be thankful for who you are right now.”

Regarding the common themes of forgiveness and gratitude in his sermons, Kwiatkowski called, “forgiveness” an unpopular virtue in our society.

In 2012, on the third day of a 30-day silent Ignatius Retreat in Gloucester, Massachusetts, he said an unknown power brought him to the art room, prompting him to draw all of his feelings and emotions. When he presented this art to his spiritual director, he was encouraged to continue expressing his emotional outlet through art.

On that day, he was not aware that it was the beginning of his new journey.

“An explosion occurred,” the artist recalled. “I realized that through colors, brushes, and scissors, my creative work allowed me a new way to communicate with God. I tell Him what I cannot express with words. He is doing the same through me.”

Now, his painting becomes a way of prayer and meditation.

“I am amazed at the depth and new meanings of the stories I come to understand when I put them on canvas,” Kwiatkowski said. “I realized that through my paintings, my communication with my people, believers and nonbelievers, has reached a deeper and more spiritual level.”

The church office and his rectory showcase his paintings and collages. The largest piece hanging in his office was created in 2013 to commemorate the retreat.

“It was many years ago and it still inspires me,” Kwiatkowski said. “For me, (the piece) is my life and every other person’s. You can see struggles, pain, confusion, but in the midst of this messy life you feel the divine presence of a loving God that always fights for you, fights for your God; fights for your soul and wants to liberate you from those struggles and to make you free. For other people it’s the destiny to heaven. If you see those things, that’s good.”