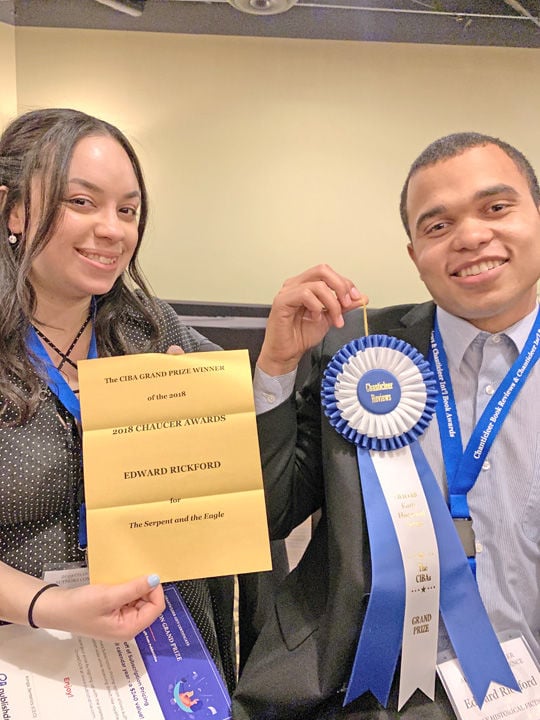 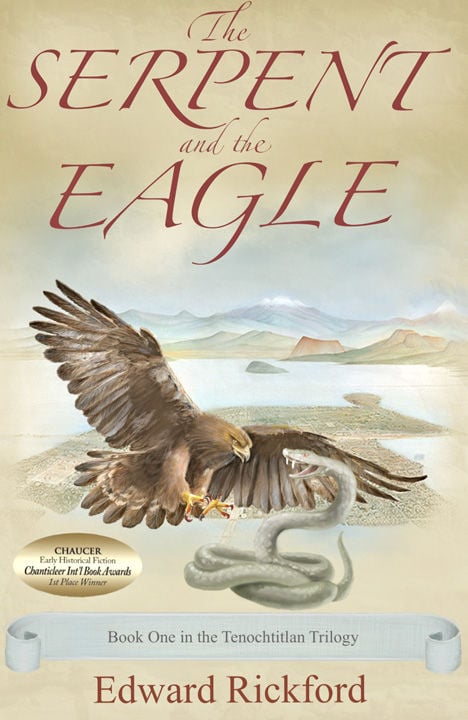 Edward Rickford’s debut novel, ‘The Serpent and the Eagle.’

Edward Rickford’s debut novel, ‘The Serpent and the Eagle.’

It took local author Edward Rickford just a few weeks to write his debut novel, “The Serpent and the Eagle.” But it took him five years to finish editing the story.

“I wrote the book over the course of a summer, plus I guess, like a few weeks in sophomore year” at George Washington University (GWU), Rickford said in a May 1 interview.

Published this year, the novel chronicles the early contacts and clashes between the Aztecs and the conquistadors led by Hernando Cortés.

“But the amount of time I put into editing the book was really, really exhaustive. I edited the book for about five years before I brought it to market.”

The story of “Serpent” opens in 1519, just after Cortés’ arrival in Mexico, his mission to explore and colonize the region for Spain. The Aztec ruler Motecuhzoma — also commonly known as Montezuma — is in the capital Tenochtitlan, considering how to respond to the “pale people” who have begun landing on the coast.

Rickford’s book is the first entry in his planned “Tenochtitlan Trilogy,” which will continue to explore the era.

Throughout the narrative, the point of view switches not only between Cortés and Motecuhzoma, but also among several other characters, some who actually existed and some who might have.

“I knew that I wanted to have a story that didn’t just follow one character,” Rickford said. “But I also knew I wanted to include viewpoints that aren’t always considered in fiction.”

When asked about the research process, the Franklin High School graduate said he was most surprised to learn “that Cortés was not perceived as a god” when he came to the Americas. Rickford said this fact made him wonder what other common assumptions of history are false.

Rickford had to choose whether to base the storyline of “Serpent” on the popular idea of Spanish colonization or the modern, scholarly understanding of it.

“Ultimately, I decided on the latter, and that’ll be my pitch, essentially, to readers,” he said. “Here’s something that’s going to be more accurate and more based on the current scholarship regarding this event.”

Rickford spent last month crossing the country to promote his book. He spoke at Morgan State University in Maryland on “how to use fiction to engage with history and how to stay motivated when carrying out a long-term research project.”

Then, he went to Washington state, where “Serpent” received the grand prize for pre-1750s historical fiction from Chanticleer International Book Awards.

“So (I’m) burning the candle at both ends right now,” Rickford said, having been back in Elk Grove from the Washington trip for a bit over three hours.

But the 25-year-old said the traveling didn’t bother him much.

“It’s actually something I really appreciate having the opportunity to do,” he said.

While studying history and political science at GWU, Rickford visited “tons of states and cities” in the United States and took a trip to Montreal, Canada. He also studied abroad in Africa, and after graduating in 2016, he taught English in China.

To further his research for “Serpent,” he went to Mexico to visit featured locations.

Rickford traced his interests in literature and history back to his time at Elk Grove schools.

Jackie Patterson, Rickford’s fifth-grade teacher at Arlene Hein Elementary School, helped him learn poems to recite for the Oral Language Faire. While he didn’t win his first competition, he came back the next year and got first place.

Without Patterson’s help, “I think the writing is something I would’ve given up a long time ago,” Rickford said.

“Serpent” represents Rickford’s passion for history, and he said he hopes readers see the subject the same way after reading his book.

“History isn’t just something that’s verbatim memorization of dates and names,” he said. “There’s nuance to it. There are witty rejoinders. There’s thrilling battles. A lot of what we think makes life or movies … or art interesting, I think can be found in history.”

“The Serpent and the Eagle” by Edward Rickford is available for purchase on Amazon.com.